A visit to the hairdresser – wig revitalisation

a.k.a. “Getting wiggy with it”

Like any girl like me, I’ve got a number of wigs. Many are cheapies that I bought for photo shoots and general fun, but my four main ones are expensive ones costing several hundred pounds each. I bought them on two separate visits to Beesley Wigs in Sandhurst using their “Buy One Get One Half Price” deals as mentioned in a previous post.

My favourite one is starting to get rather tired and “wiggy”, so I decided it was time to do something about it.

END_OF_DOCUMENT_TOKEN_TO_BE_REPLACED

As I mentioned in my last post, I took some time off for a Staycation. Well, that was this week and I am over halfway through it.

It’s been a week of ups and downs. And in one case, an “up” that didn’t happen – namely the gliding. Sunday was a beautifully sunny day with not a cloud in the sky, but unfortunately Monday was total cloud cover and they cancelled it on me. I’ve rebooked for Friday (tomorrow) but my hopes aren’t high. 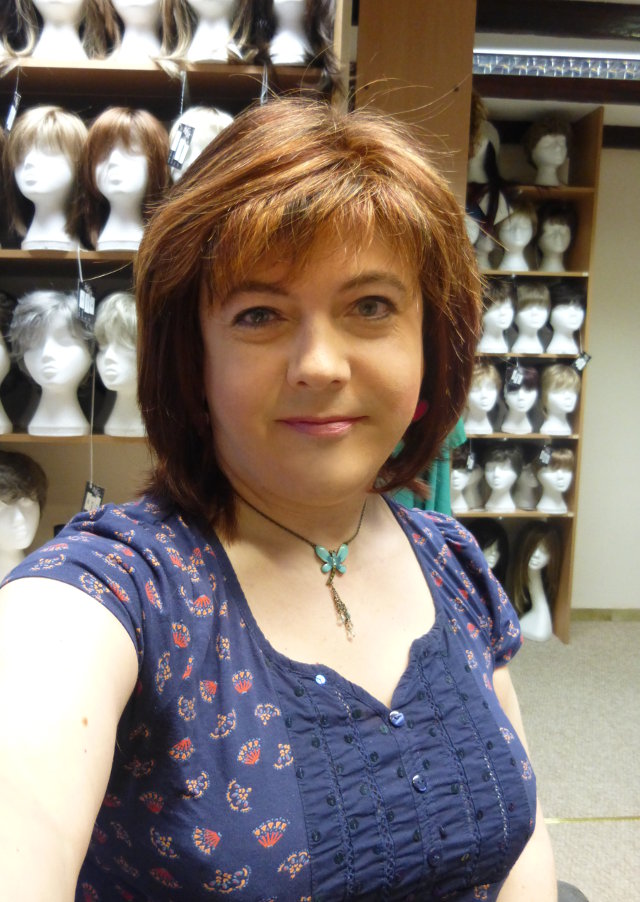 On Tuesday I had an appointment at the Wig Shop. Quite a funny thing happened when I went there. They brought out the Raquel Welch “Infatuation” wig that I had asked for, but remarked that my existing wig didn’t seem *that* different in colour to it, and looked like it still had plenty of life left in it, so they were a little confused and thought that they might have got their wires crossed over my request. Yes, that’s right; the shorter of my two existing wigs (which was the one I was wearing) is “Infatuation” and I didn’t know. Now, on the face of it this makes me look a little silly, but in my defence I bought it from them and they are in the habit of not telling you what you are buying. In actual fact I have tried quite hard to determine what my wigs are with no success, so I think I can be allowed this. Anyway, I still can’t get over how ironic that is – a wig that I was sure that would suit me from pics I have seen on the Internet, only to find it is one that I have and love.

Still, much as I like the colour, I didn’t think it was worth buying the same wig again, especially as I have rather gone off the shorter style and think that it makes me look a little ‘mumsy’. 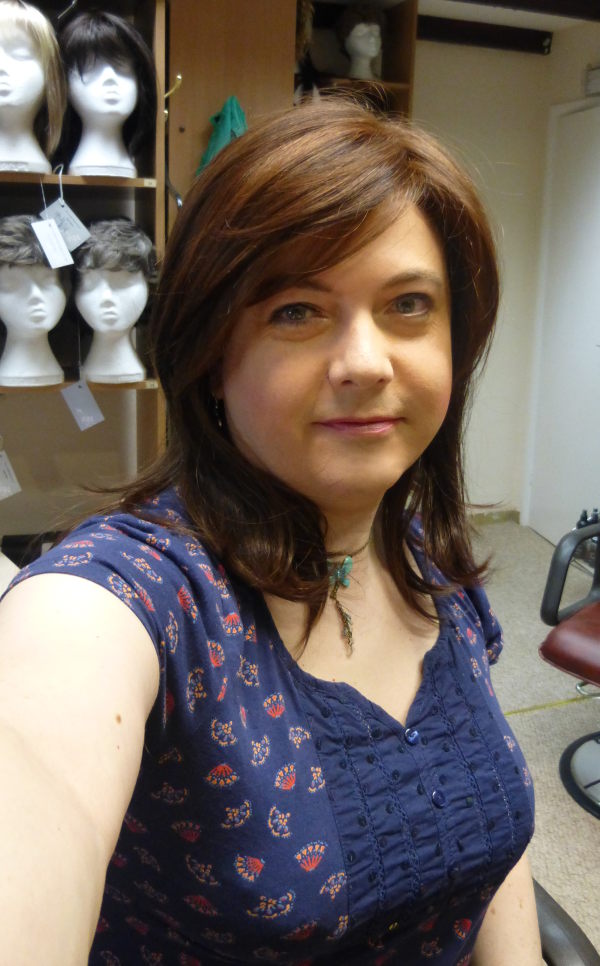 So, next up was a longer and much more expensive wig, again by Raquel Welch. Full monofilament cap, lace front, and heat resistant. In fact, everything that the “Show Stopper” wig was. In fact, it may even be Show Stopper – they were evasive when I asked which one it was and I never did find out.
I immediately fell in love with this wig. Also, I think that it being heat-resistant (and hence able to be styled) could be quite versatile and a lot of fun.
I tried on several different colours in this style, but this was the one that I liked the most and we both agreed suited me the best. 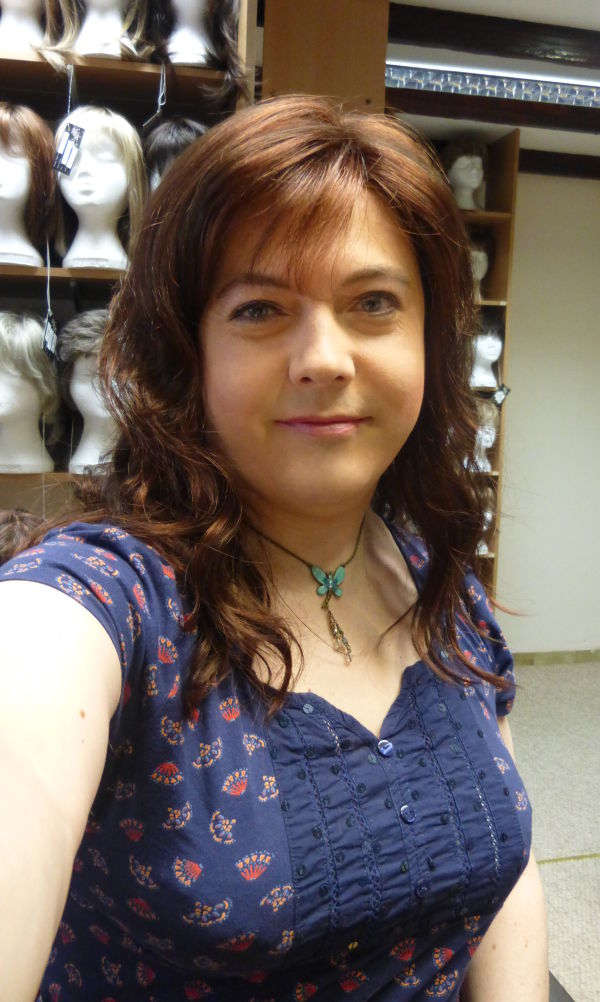 Next to try on was another Raquel Welch; again full monofilament cap and lace front, but not heat resistant. It had lovely curls in it and I immediately knew this was “the one”. Sometimes you just know when something is right.
This one was apparently so new in that the assistant conveniently didn’t know what it was called. So, again, I don’t know which one it is.

I also tried some others on, but none of them were ‘me’ and for many I didn’t even bother to take photos. Those that I did take photos of, I’d rather not share them as I didn’t like them.

So, it was decision time. And since this shop runs a “buy one, get the second half price” deal, and charges the full RRP for wigs otherwise, you pretty much have to buy two. If you do, then their prices work out quite well. If you don’t then they are expensive.

But it wasn’t very hard to decide – I bought the heat-resistant one and the one with the curls. Even with the discount, it was a fairly horrific amount of money – I’m not even going to tell you. But let’s just say that my geeky side was thinking just how much ‘tech you could buy for that. Still, never mind.

After I’d made the purchase, I chose to wear the heat-resistant one, and then went off to Camberley to do some shopping and also to get my favourite pair of guy mode ankle boots re-soled. For the second time. I bought them years and years ago, and they were only cheap – £25 in a Barratts sale (one of their many fire sales due to going into administration). But they are so comfy and I love them so much. The sole and heel wore out on both after a few years, so I got them re-soled and re-heeled at a cost of around £28 if I remember correctly. Those lasted a few more years and the heels are still ok, but I have worn the soles out again. Re-soling cost me £17.95 this time.

Whilst there I also managed to grab an absolute barrrrrrrrrrgain in H&M. I got an absolutely gorgeous polka dot skater dress for £5 in the sale. The euphoria of a genuine bargain slightly tempered the feeling of shock over how much the wigs cost. 🙂

Once I got home, I decided to take some photos of the new dress and new wigs. I only managed one wig though, because I was quite tired by then and felt that was enough.

That’s all for this post – I will continue in a subsequent one tomorrow. 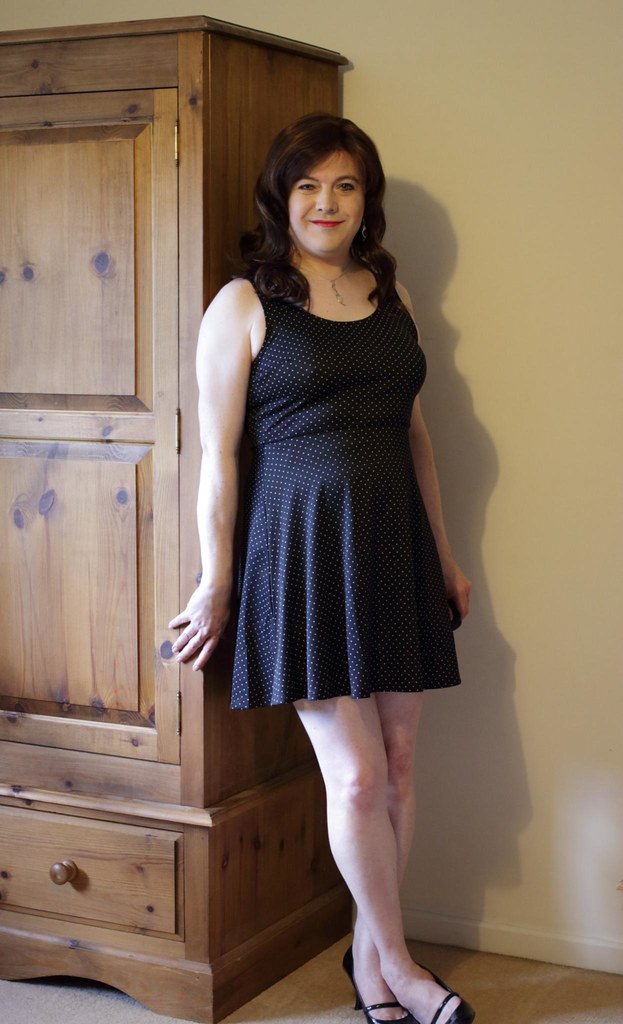 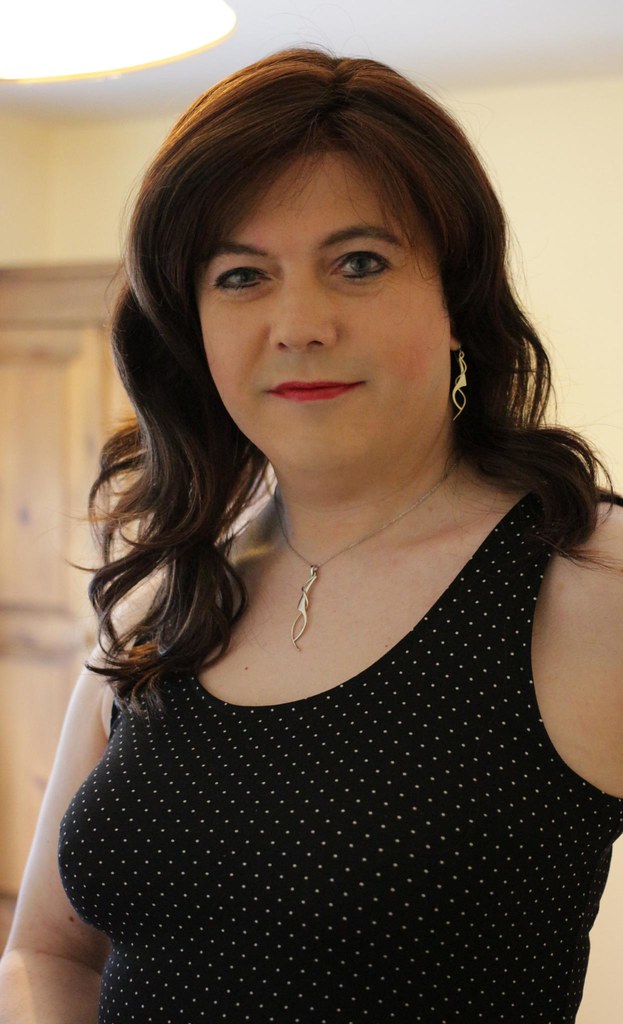 Posted by Hay Llamas on 2nd October 2014 in Diary, Hair and wigs, Out & About, Shopping

I still haven’t made a purchasing decision on a new wig yet. I’m still thinking long and hard about the Show Stopper by Raquel Welch but it is very expensive and also I have learned that it is being discontinued so maybe it will shortly be marked down in clearance or else may become hard to find. It’s difficult to know what to do there.

In the meantime, my lovely friend Sarah sent me a link to the Infatuation wig, also by Raquel Welch. Like Show Stopper it has a full monofilament crown with lace front, however it doesn’t appear to be heat resistant. It’s a lot cheaper though. 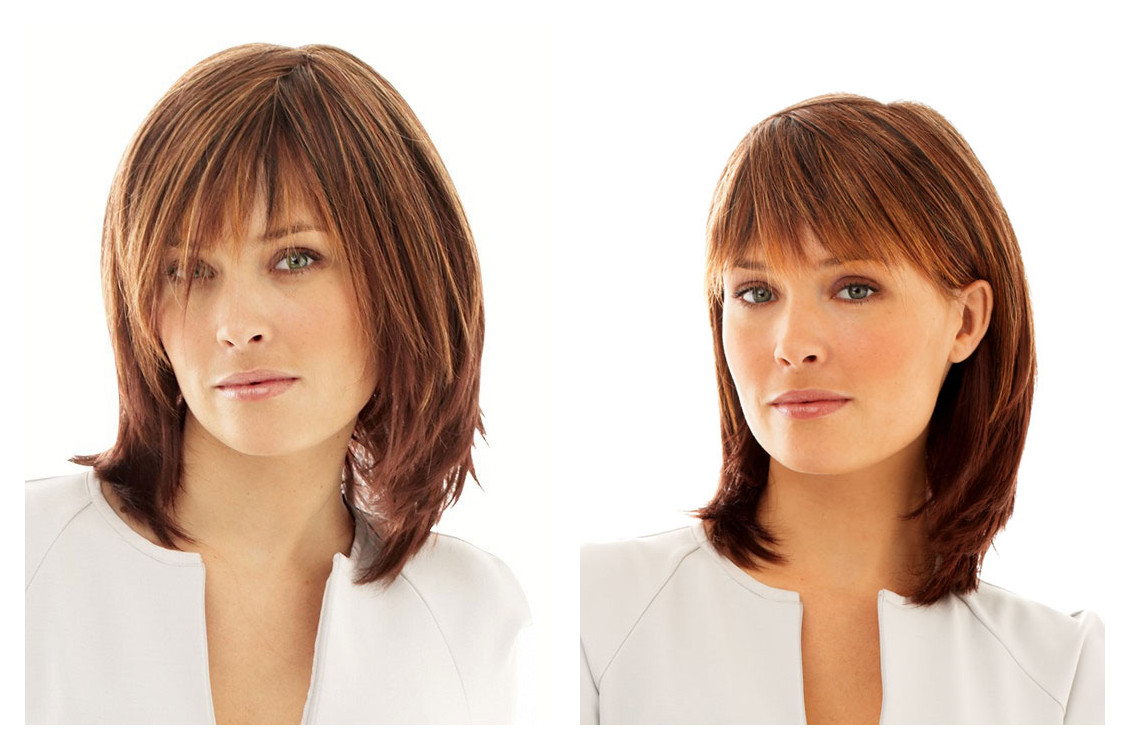 I have to say that I’m really tempted by this one despite it not being massively different to my existing Raquel Welch wig.

Posted by Hay Llamas on 28th June 2014 in Diary, Hair and wigs, Photos 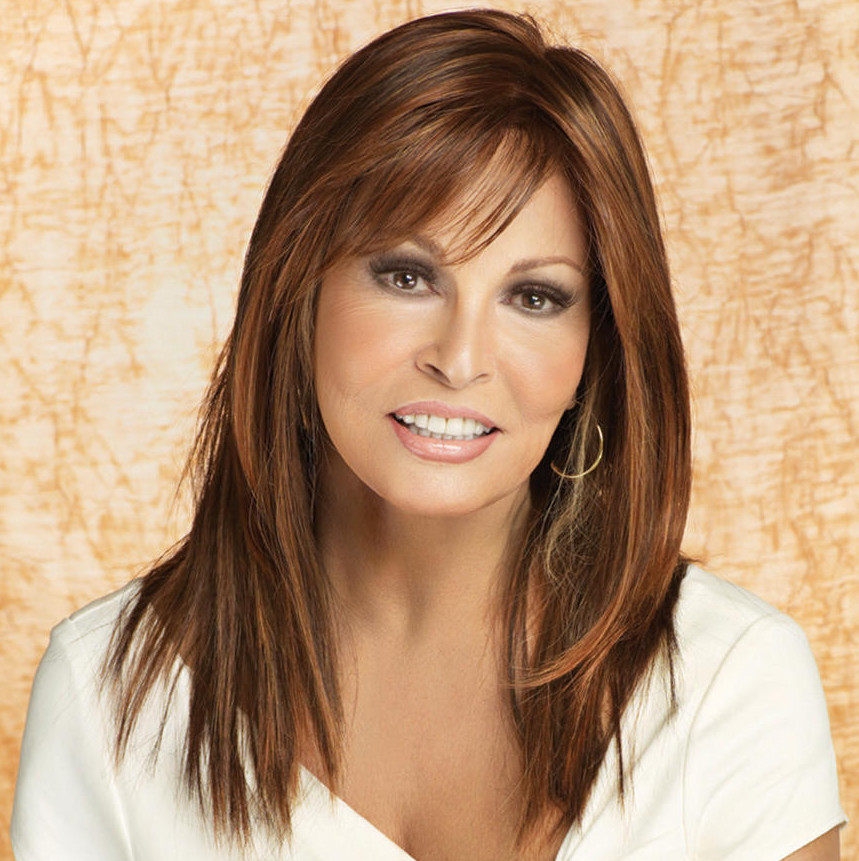 I’ve been looking for a new wig for a while. Of the two I currently have, one is by Ellen Wille and has a monofilament parting, and the other is by Raquel Welch and has a full monofilament crown. What is the difference? With a mono parting the style is pretty much fixed, but with a mono crown you can part the hair anywhere you want on that area which gives you more flexibility in styling it.

So I decided that my next wig must be a full monofilament crown with lace front, and should be longer than my current two.

After much searching, I think that the Show Stopper wig by Raquel Welch could be the one I want. It has the full monofilament crown with lace front that I want, has a memory cap base just like my existing Raquel Welch wig, and also has Tru2life fibre which means that it is heat resistant and can be heat styled. This is a step up from my current wigs which are extremely intolerant to heat – the care instructions say you should avoid opening an oven door whilst wearing them!

The only question now is which colour to go for and where to buy it. I really like the colour in the picture (which is RL32/31 Cinnabar) so that’s a contender.

To give myself an idea of how I might look in it, I fired up GIMP and pasted my face onto the above pic. Here’s what I came up with. It’s not perfect and I haven’t attempted to match the skin tones. 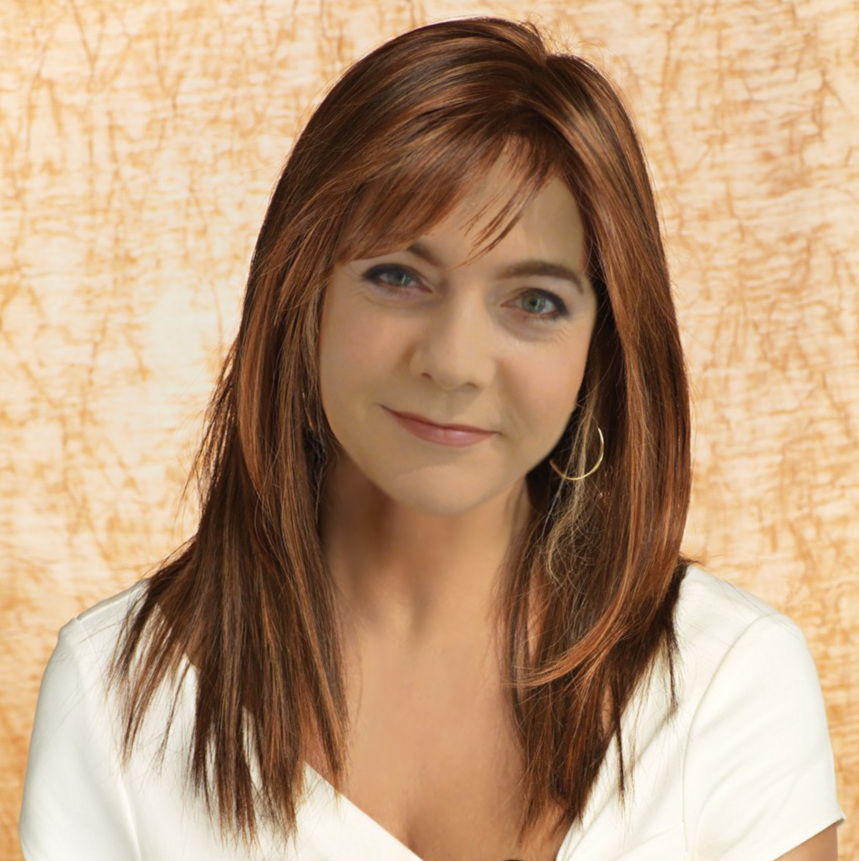 Finally, here’s a couple of videos of the wig.

Posted by Hay Llamas on 8th June 2014 in Diary, Hair and wigs, Photos