Back in August of this year, I posted on Flickr that I had just passed 1.5 million views (or, as Dr. Evil might say, “Wun point five MEEEELEON” views). It had taken me 5½ years to get to that point.

Well, today I realised that I have just passed 2 million views. I must confess that I’m slightly surprised by this because I have observed that since Flickr changed the way that the main page works, people are more likely to star (mark as a favourite) a picture than to click through to it, which can result in the rather bizarre situation of having more favourites than views on a picture. So to take 5½ years to get 1.5 million views and then just under 3 months to get another half million, when views are harder to come by, is a little bit of a puzzler. But clearly I’m doing something right. 🙂 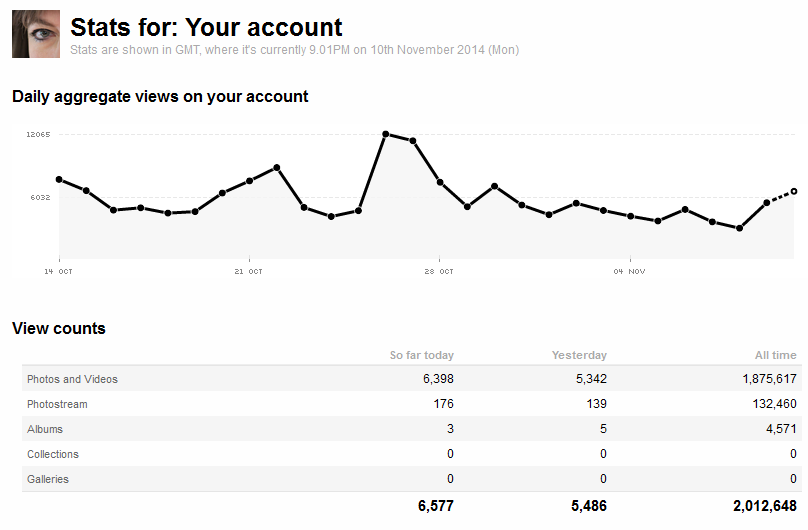 Partly that may be down to you, as a follower of my blog and/or my new Twitter account, becoming a follower on Flickr as well. If so, then thank you very much for viewing my pics and I hope you enjoy them! I certainly enjoy taking them and it is always nice to hear that they are appreciated. Fortunately I get almost entirely nice and positive comments, and only very, very rarely (as in literally only once or twice) get horrid trolling transphobic ones. Those are very quickly deleted and reported – I’m more than happy to accept positive criticism but I don’t see that I have to stand for transphobic insults from poisonous people.

In case you’re wondering how I generated the statistics graphs, my Flickr account is still a Flickr Pro. It used to be that unless you were happy with a load of restrictions on a free account, you needed to pay $24.95 a year for a Pro account. In May 2014, Flickr removed most of the restrictions on the free account and rendered Flickr Pro pretty much obsolete. You can read more about it all in this post on Mashable. The only real benefit that Flickr Pro still gives over a standard free account is the aforementioned statistics and referrals information (ostensibly it also gives you an ‘advert-free experience’. But so does Adblock Plus). Since I find it interesting to see the statistics I continue to pay my $24.95pa for it. I’ve let my other two Flickr accounts lapse to ordinary ones though, as the statistics are of less interest to me on those and also I can’t really justify spending the extra money to maintain Flickr Pro on those accounts.