In a previous post, I mentioned how I had built two workbenches out of plywood and planed timber.

Only a few days after building the smaller one, I sold the grey fridge freezer which meant that I now had much more space and would need a wider workbench there.

I popped up to my local B&Q to have a rummage in their offcuts section, and as luck would have it they had a lovely bit of 18mm exterior plywood measuring 165cm x 60cm which was pretty much exactly the dimensions I wanted, and it cost only £5.

For this workbench, I’d learned my lessons on simplicity from the other ones, so this one would be attached to the wall on its rear and right edges, and the front left corner by a worktop leg. I chose a worktop leg because I already had one “in stock” in the garage which I had bought 20-odd years ago but never used and had been sitting there, unopened, ever since. So it was nice to be able to finally use it. 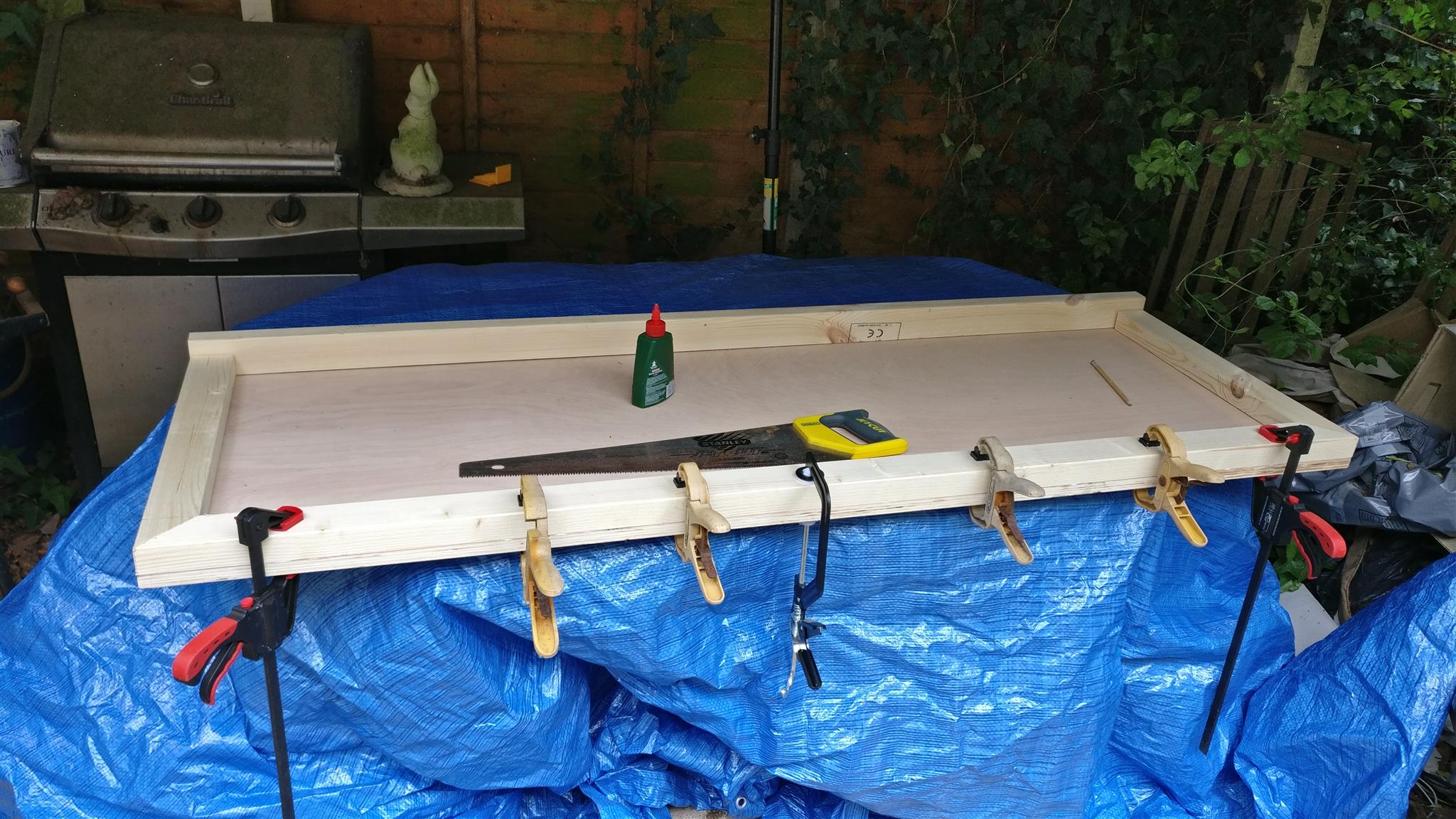 Construction of the worktop was by the now familiar design of 18mm plywood top reinforced by 38mm x 63mm studwork timber. For this one I decided to lay the front and side rims flat to give a smaller lip, and also I mitred the front edges for no other reason than I felt like it.

For the rear edge I mounted the timber vertically, as it would be screwed into a brick wall and this orientation would be the strongest.

I then finished it off with a reinforcing joist down the centre line, for which I had some help from my little woodland friends for the gluing. 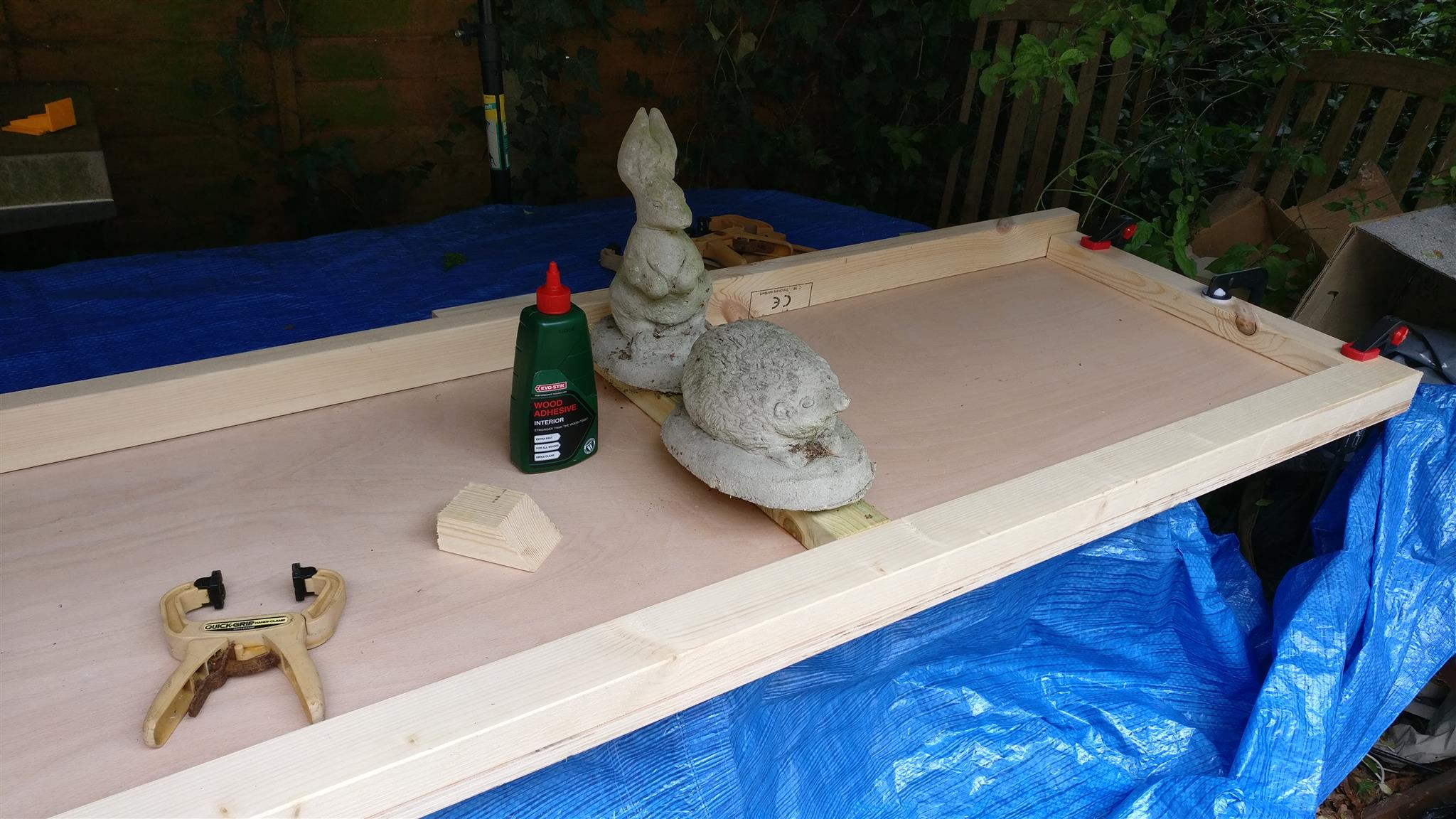 In keeping with lessons learned from the small workbench, I used very minimal screws and relied mainly on the wood glue.

I had some other things to do after that, so that’s all I did that day.

It rained overnight and all day the next day. I didn’t realise it, but there was a hole in the roof of the carport and the worktop got wet. 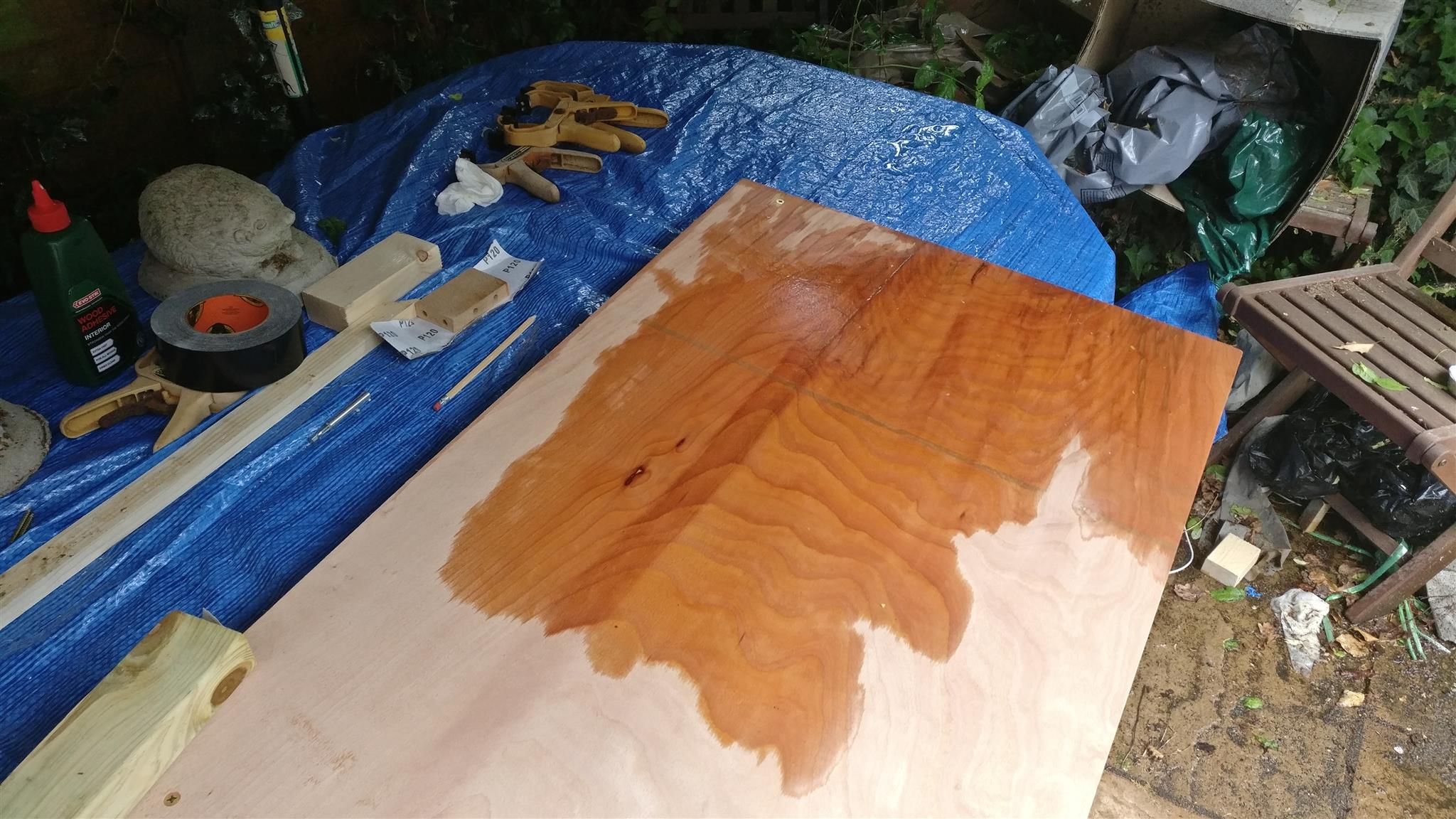 Fortunately the plywood is exterior grade, and it dried out quickly with minimal staining.

Whilst it was drying, I moved the upright freezer as far left as possible, and then moved the wall cabinet across to butt up to it, making the largest space possible for the new workbench. The cabinet was a right pest to do on my own, especially lining up the screws with the holes in the wall.

The next day was a lot brighter, and I resumed work. For the back baton, I needed to cut a channel for electrical cables. I also realised I would need to chisel out a gap to fit round some brickwork which was standing proud of the wall. Similar cutouts would then be needed on the plywood top. 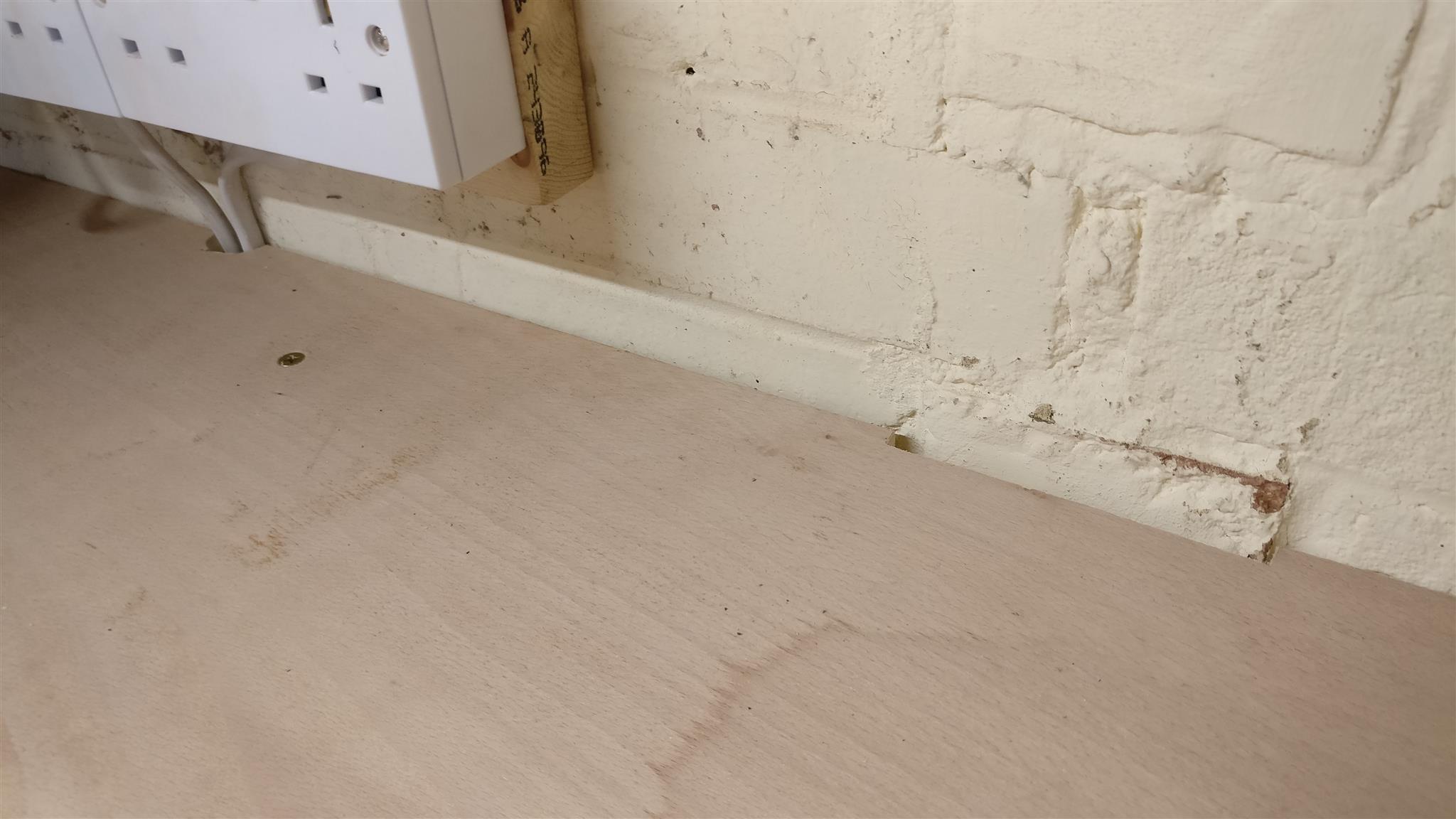 I used one of my bar clamps in spreader configuration and an offcut of wood to make a jack, in order to bring the worktop up to a horizontal position. Then I used two angle brackets that came with the IKEA leg as supports. This ought to be strong enough, but I can easily reinforce this at a later date if it turns out not to be. 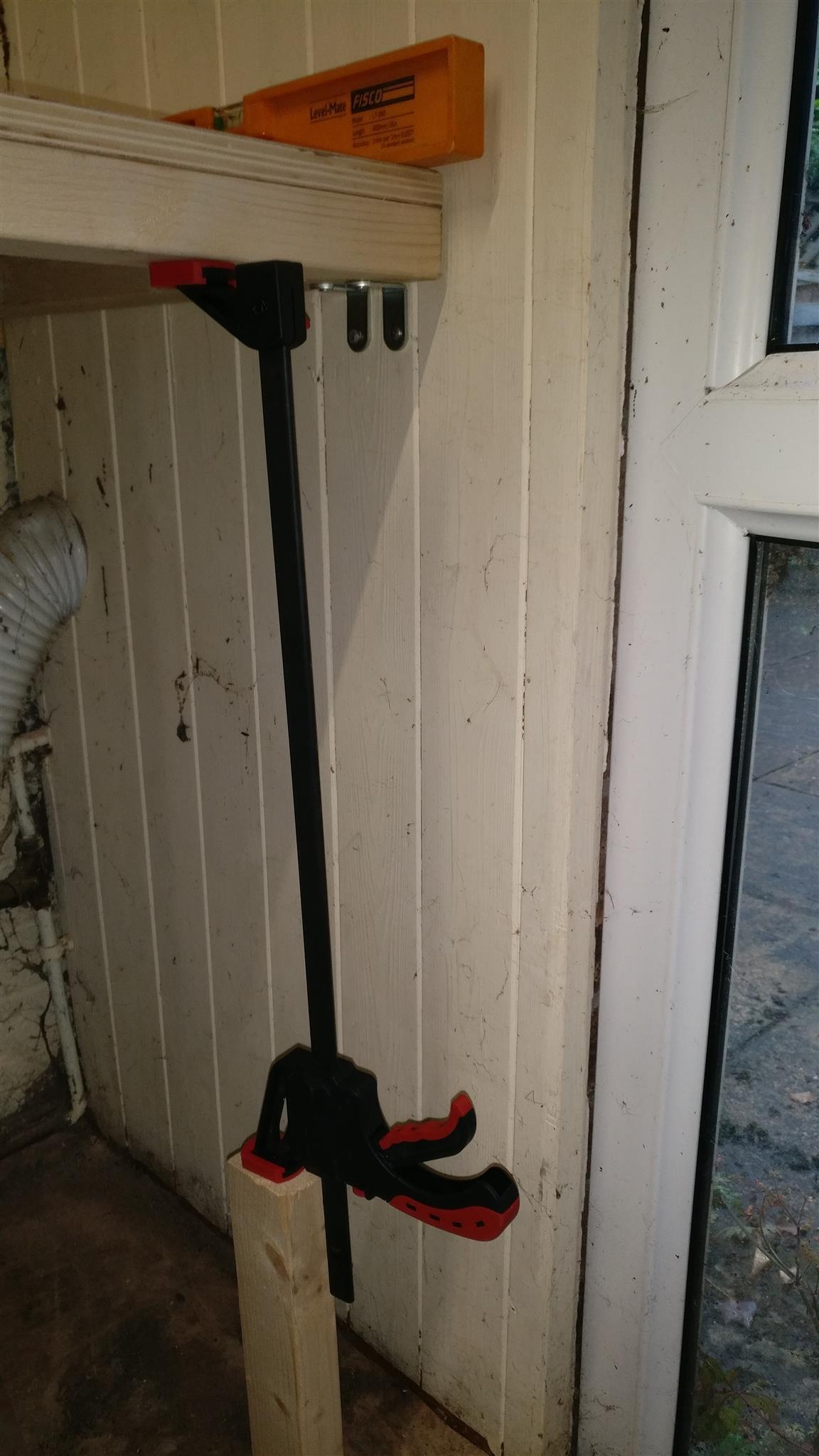 The IKEA leg at the other end was a doddle to fit.

Since I didn’t have clearance above the workbench to screw down into it, due to the cabinet, I used plastic right-angle blocks from the underside instead. Of course, I could have just taken the cabinet down temporarily but I really didn’t fancy that. 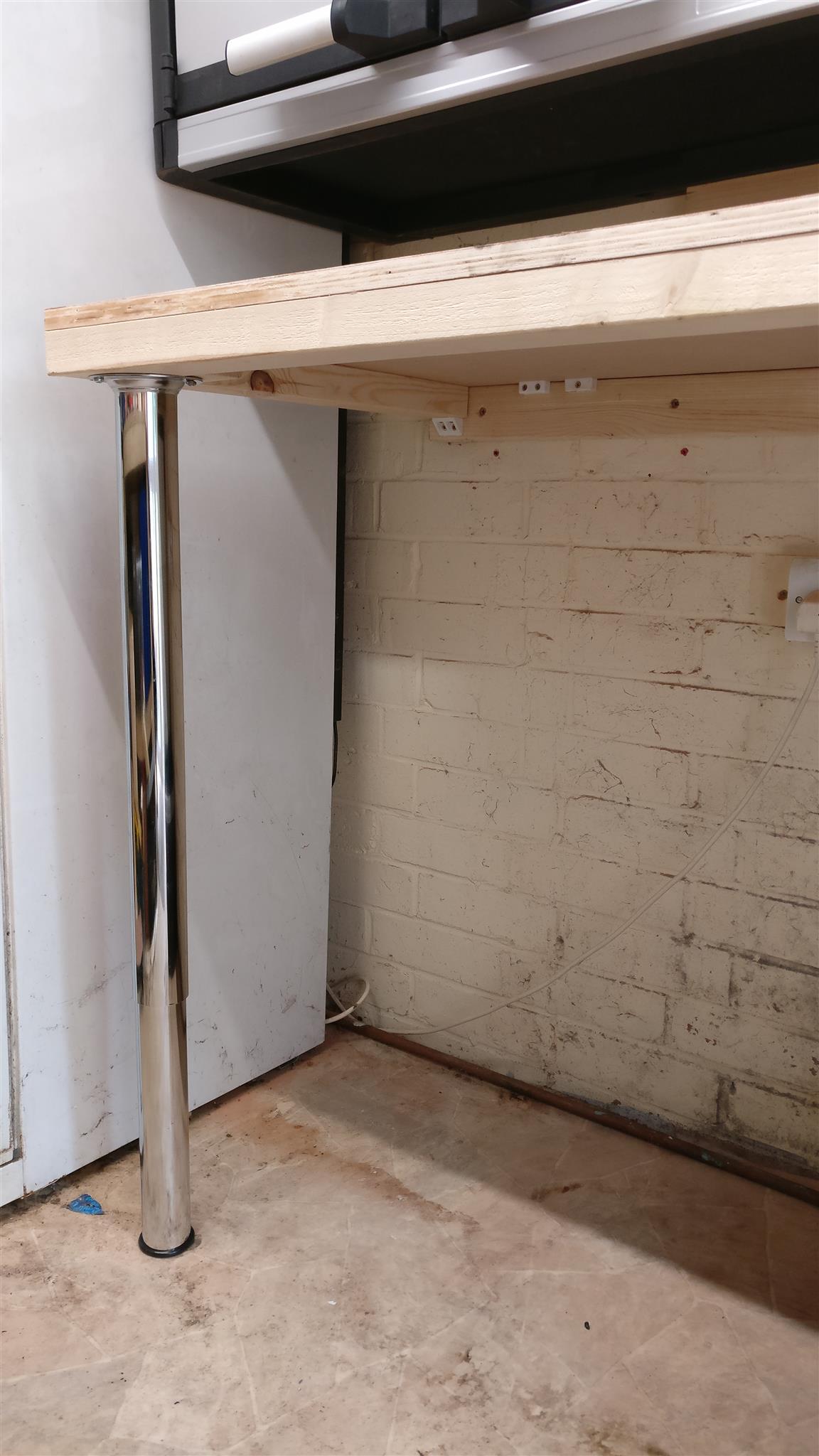 At the other end, with no such clearance issues, I was able to just screw down vertically through the worktop and into the rear baton. 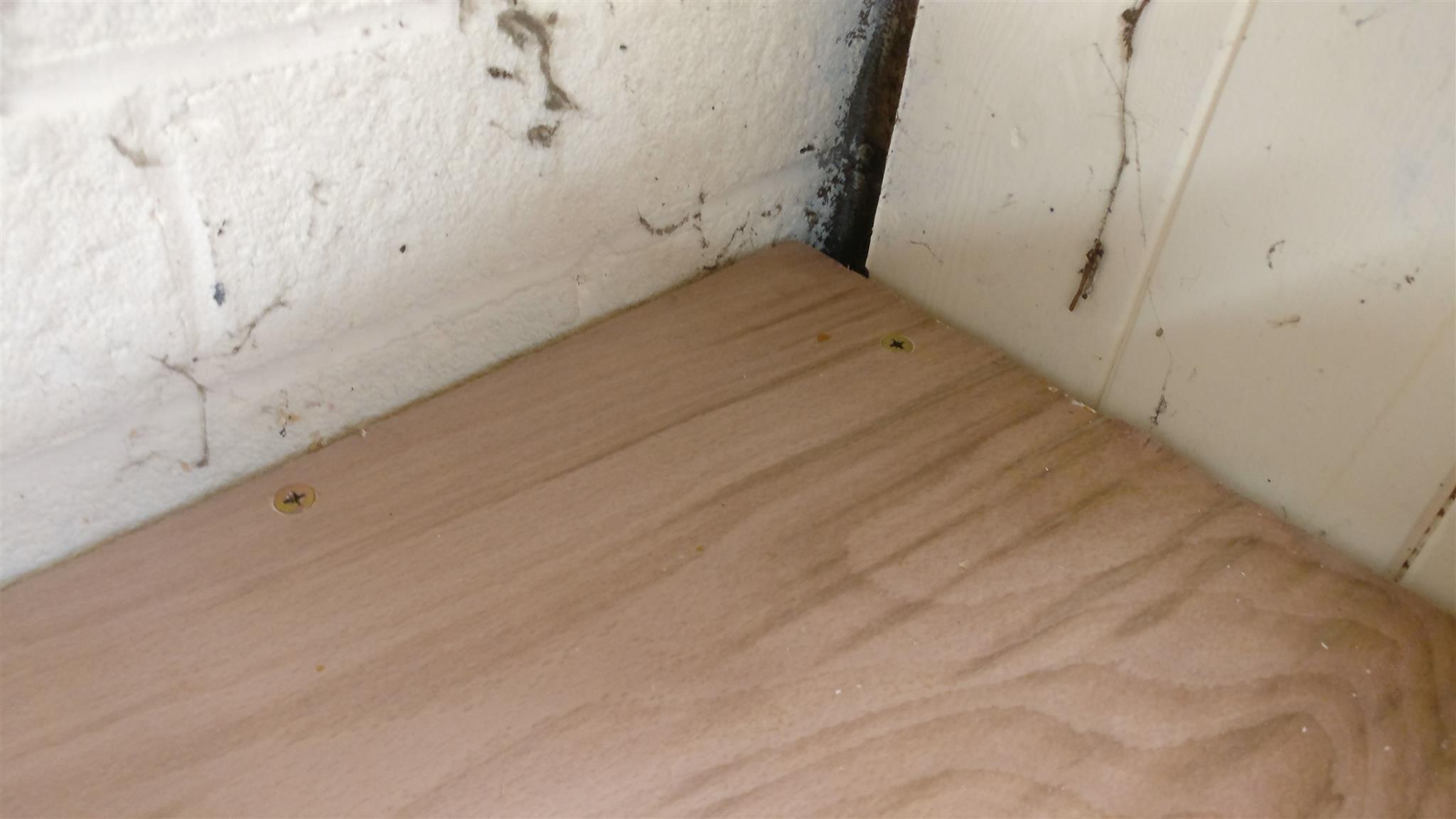 And, then it was all complete. A very simple yet effective workbench / worktop. 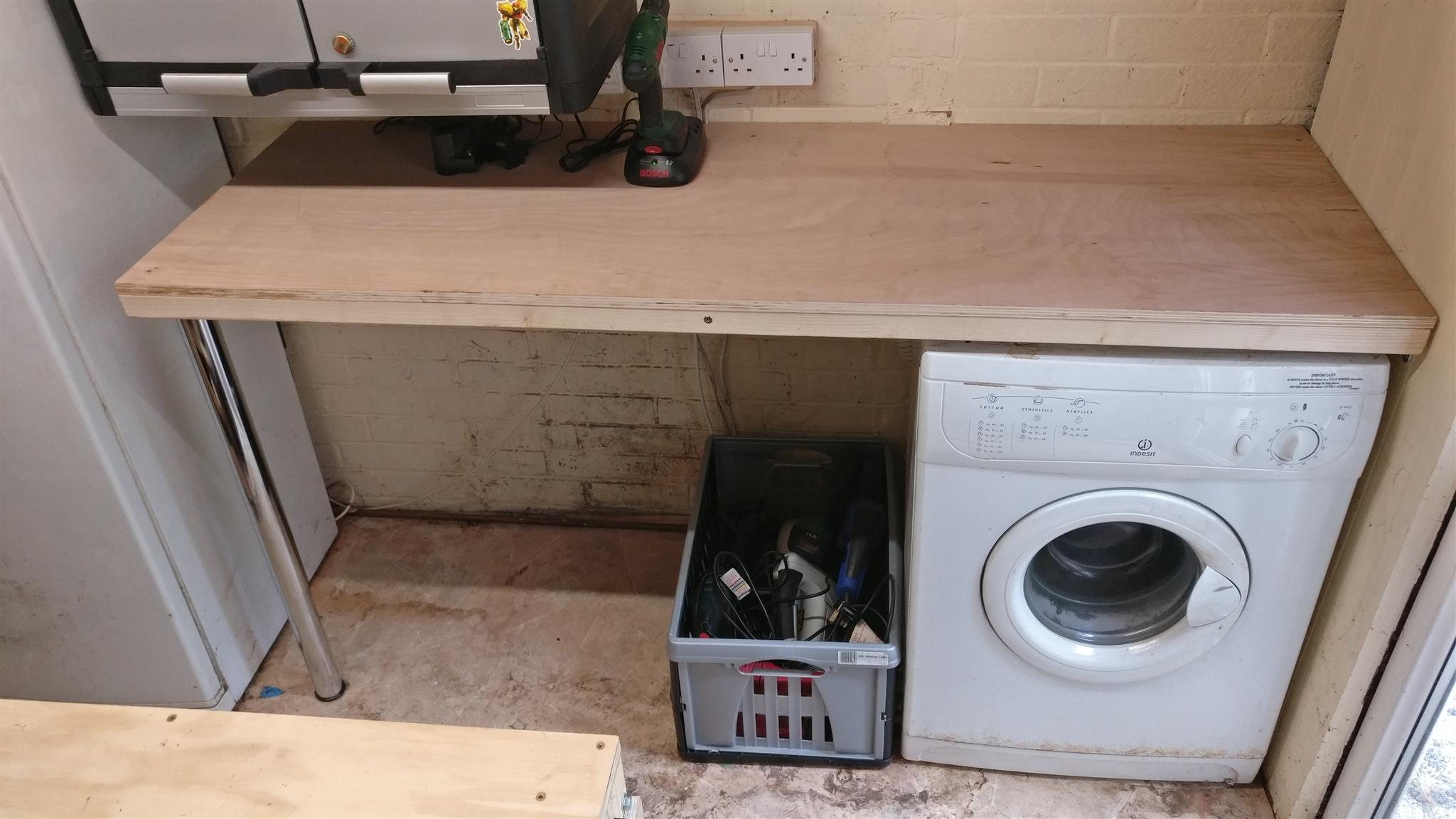 The only things I needed to buy, which I didn’t have already, were the 18mm ply top at £5 and two lengths of studwork timber at £2.86 each.