As I mentioned in a previous post, I had been planning a night out with a friend and had bought the “Two-Tone Sequin Bodycon Dress” by Top Shop in anticipation.

That night out was meant to be last Friday and was to have been the December BNO at Pink Punters, but for one reason and another I had to drop out and not go. If I’m absolutely honest, then I have to admit that cold feet was one of the reasons. 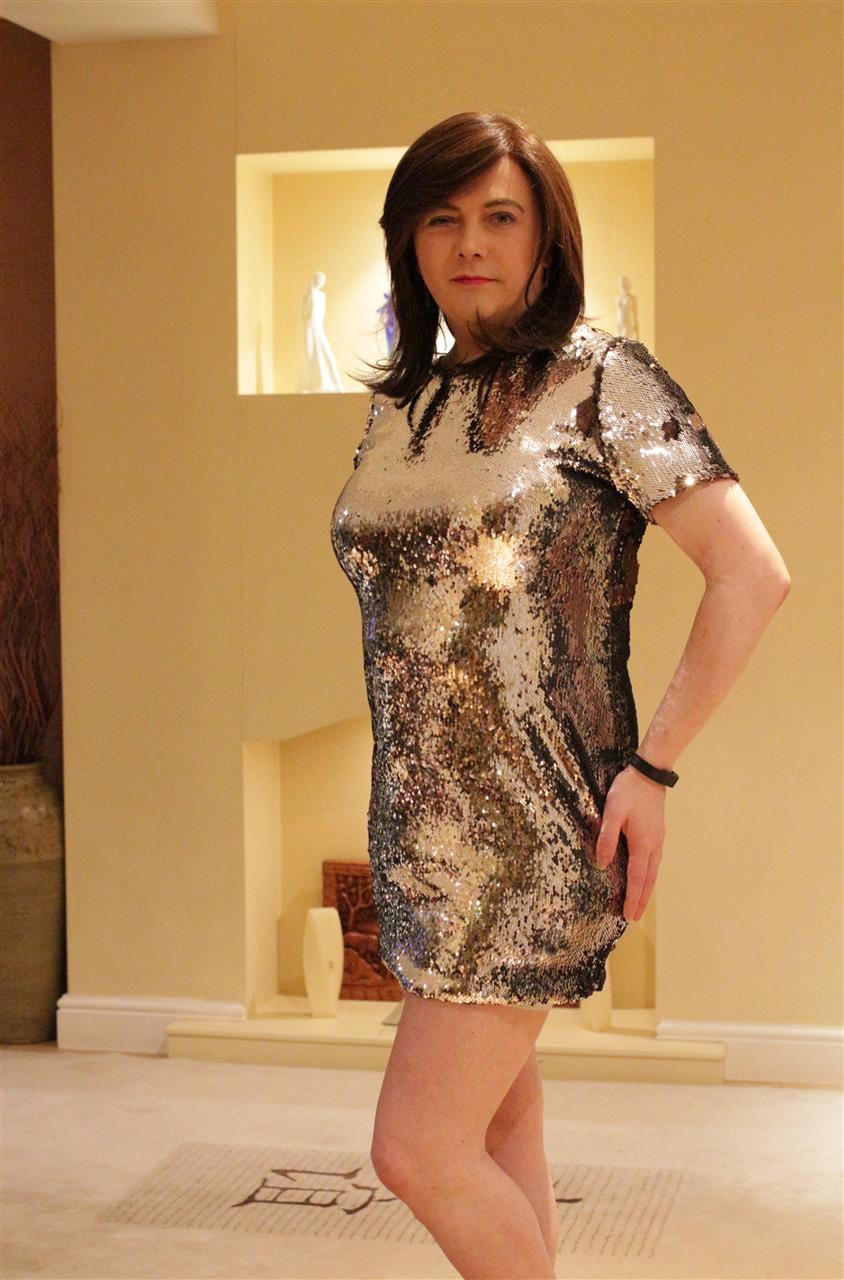 On Sunday, after I got back from the Take Five fair at Woking, I thought I should try the dress on again in order to decide once and for all if I should keep it for another time or take it back for a refund.

I tried it on, and it was really easy to get into. I particularly like the fact that the zip is long, robust, has large metal teeth which do not jam or snag, and also has a long tag on it which makes doing it up on your own quite easy. So many dresses with back zips are a real struggle to do up on your own and seem to be designed for someone else zipping you up.

Once on, it is really comfortable and fits me absolutely perfectly across the shoulders; it almost feels as if it was tailor-made for me. However, I simply can’t escape the fact that this dress simply does not flatter me and is really rather shapeless. Despite being a size 14, I think that it makes me look a lot bigger. I also feel that, although the flip effect is fun, it only takes brushing against something to alter how it looks and make it look messy. So, really, I just don’t think it’s “me” because for one thing I would be stressing about that all the time!

As a result, I think that it really has to go back for a refund which I will be doing ASAP as I only have until 29th December to get a refund according to the receipt. That means I either have to brave Basingstoke’s Festival Place on the last weekend before Christmas or else brave it immediately after Christmas when the sales are on. I’m not sure which will be more busy and stressful!

I also tried the Snow Leopard Faux Fur Jacket that I bought from Select Fashion. I think I will keep that because I really like it and it’s so glamourous. I’m sure I will be able to wear it next time I have a night out. It’s certainly nicer than that overcoat that I bought which I have never worn and, with hindsight, I think I probably never will either.

Finally, just as a follow-up to my post about the Take Five fair at Woking, I went on Amazon last night and found a lovely pair of Dragonfly earrings that look to be virtually identical to the ones I declined to buy at £19 at the fair (and which the seller had been asking £20 for initially). They cost me £15.20 including postage. Just shows that you have to keep your wits about you when attending fairs and know what is a bargain and what is not.

The earrings arrived today and, in fairness to the seller at the Take Five fair, I should say that these are smaller than the ones he was selling. However, they are hallmarked silver and I’m not sure if his were. But they’re just the right size and I really like them. So expect to see them in a future pic!

On Friday I had the day off and decided to go shopping to look for a party dress as I am going out with a friend in a couple of weeks for a night out and need one.

‘Stripe Sequin Dress’ by Next

The first that caught my eye was in Next. I spied it on a wall poster and then spent ages trying to find it on the racks because it looked really good in the pics and I thought it was worth searching for. Eventually I found it on the other side of the shop. I hate that. As it happened, they didn’t have it in my size – there were only two left and one was way too small and the other too big. Also it was £75 which was a little more than I was planning to spend, so I mentally marked it as a “possible” and moved on.
It’s on their website listed as “Stripe Sequin Dress” but currently showing as sold out. 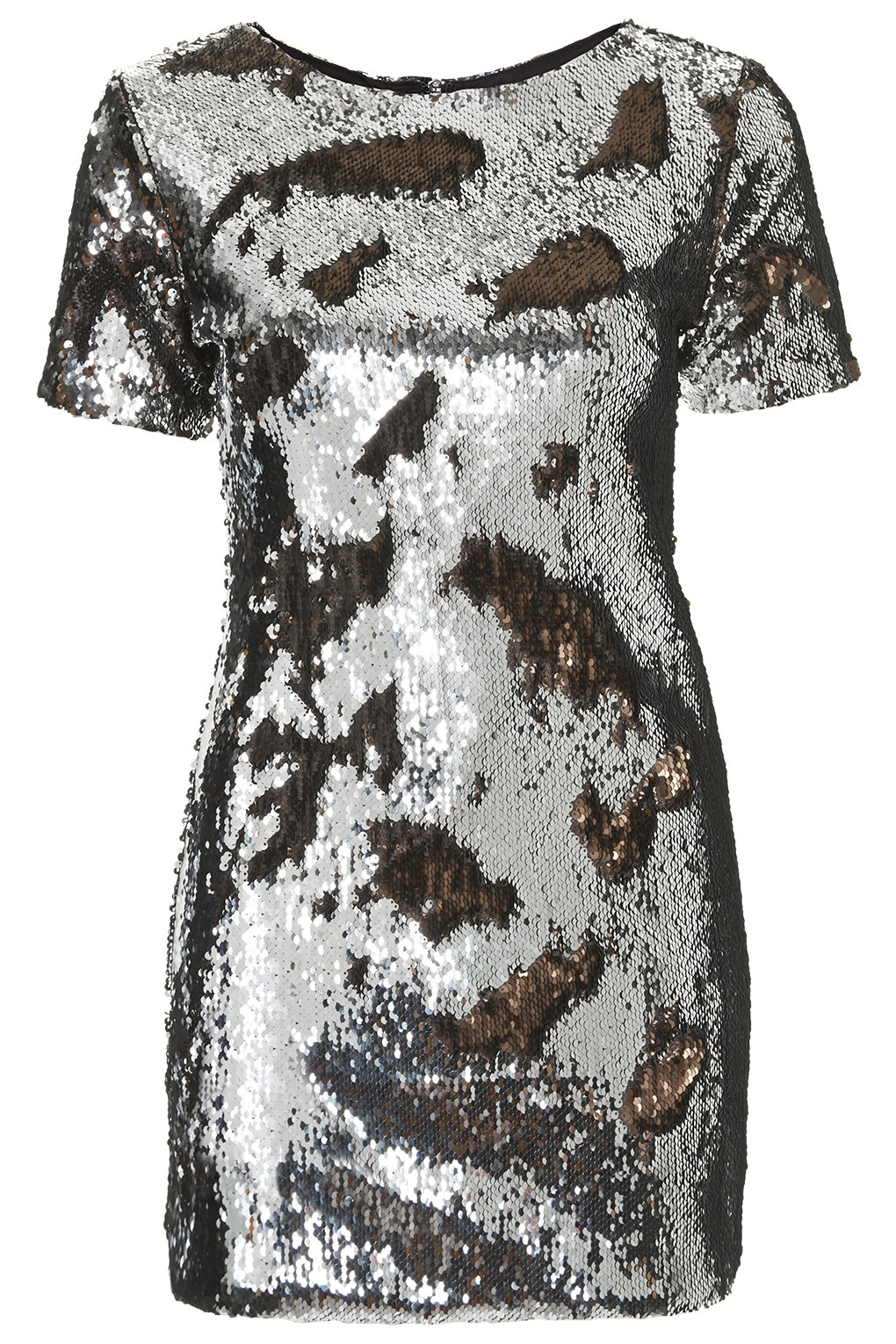 The next shop that I went into was Top Shop, and two dresses caught my eye. One was a simple black dress with silver woven into it that I really liked, but they didn’t have my size.

Then I saw this dress (pictured) and it absolutely wowed me. It’s listed on their website as “Two-Tone Sequin Bodycon Dress” and is sequinned all over, but the sequins are reversible. On one side they’re silver and on the other side they are a bronzey-gold. You stroke the dress to flip the sequins over, which means you can draw your own patterns and designs on it. Even better, it fit me perfectly when I tried it on.
My only reservations were the price (£68, and sadly not in the Black Friday sale) and the fact that it is a little shapeless and not especially flattering. However, the reversible sequins swung it for me and I bought it.
Now that I have it home, I’m not 100% sure I’m going to keep it due the aforementioned issue of it being a bit shapeless. I’ll need to try it on again and have a really good think about it and then decide. Maybe I will post a pic up of me wearing it for the purposes of critique and opinion.
If I do keep it and do wear it for my night out, then I’ll have to be careful that people don’t doodle on it, or draw a cock on my back! 😀

I then popped into Select Fashion. I like their stuff (as I have mentioned in the past) and can often pick up something nice in there for a reasonable price.
On this occasion, I saw a Snow Leopard Faux Fur Jacket that I rather fell in love with. At £34.99 it was a bit of an extravagance, but it should go with a party dress really well. Also, it turned out that it was eligible for 25% off due to Black Friday which means I ended up being charged £26.24 which softened the blow somewhat. 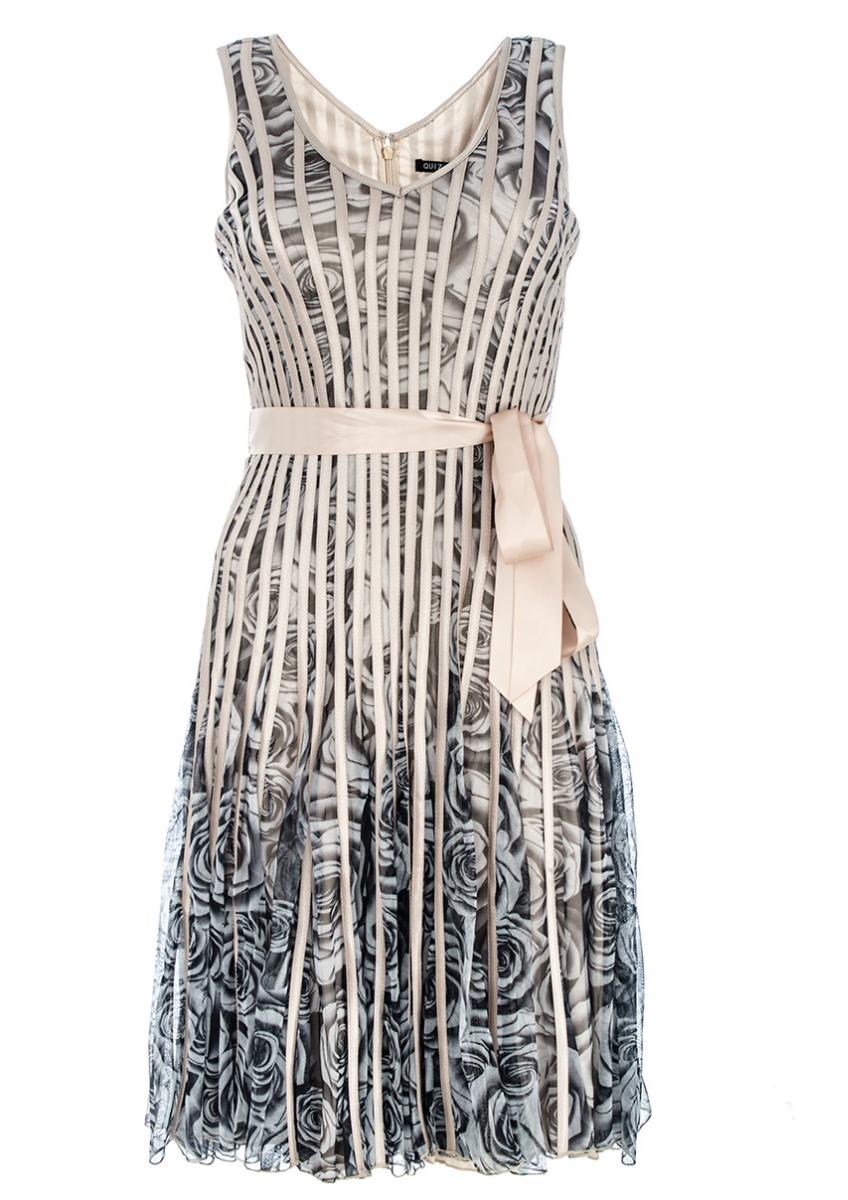 The next shop I went into was Quiz, and this is where I struck gold as far as a bargain was concerned.
I spotted a lovely dress that I was immediately drawn to as it had an Art Deco vibe to it (in my eyes anyway). I’ve since found it on their website where it’s described as “Gold and Grey Mesh Flower Print Dress”. I decided I should try it on, so did so and whilst I was in the changing room I took a pic of myself in it. 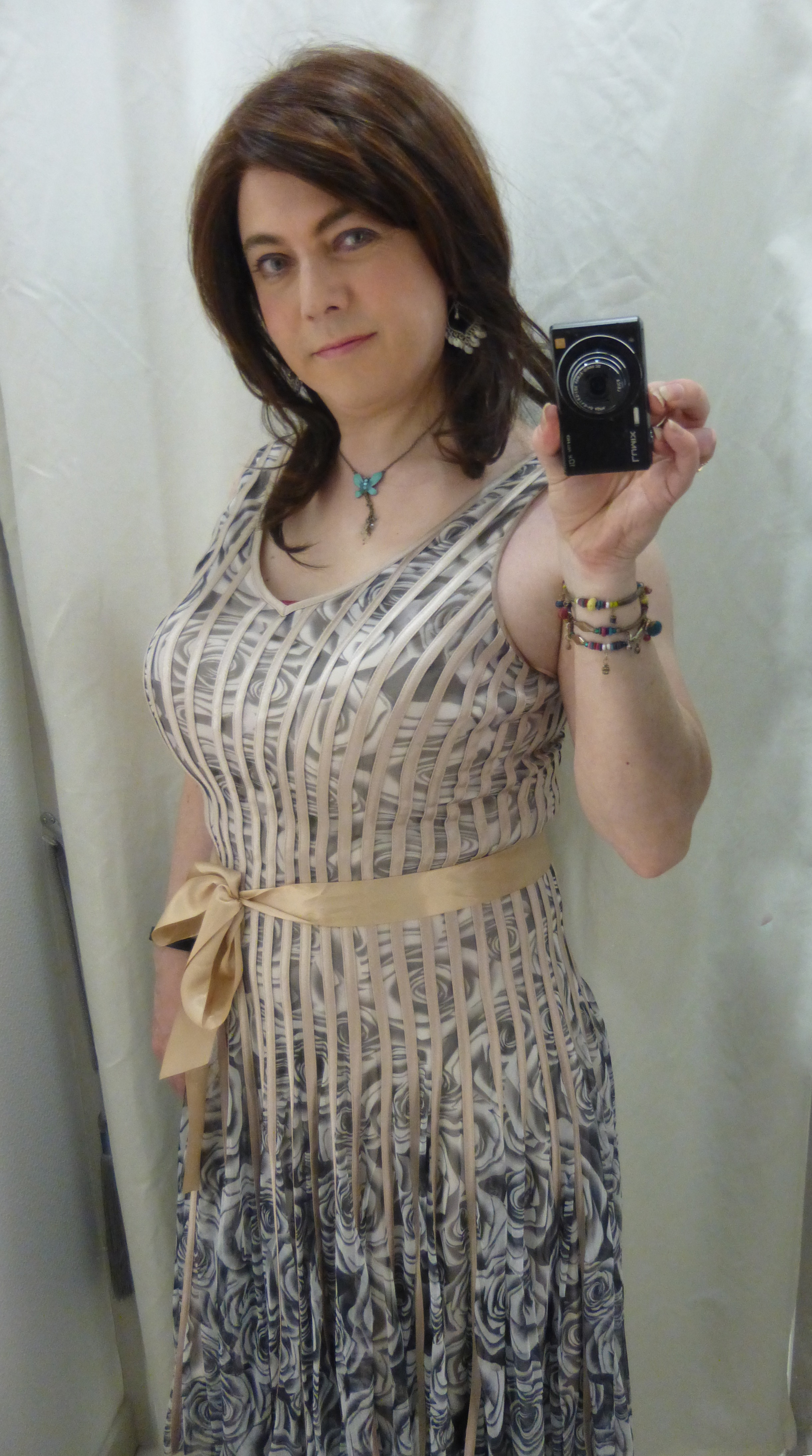 I was really happy with the look and the fit. The price was marked as £75 but it had been hand-amended underneath to £49.99 with Tippex and biro. I checked the other dresses to make sure they were the same, and they were. I also noticed a Black Friday sign saying “£20 off all original prices” but I wasn’t entirely sure what the final price was going to end up as it was unclear which price they’d be taking the £20 off.

After rather a long time queuing for the till, where it seemed they needed two people to operate one till, I got served and initially they wanted to take £20 off the un-discounted price of £75 and charge me £55, but I pointed out the £49.99 price. They were initially a little sceptical (I wasn’t offended – it’s possible somebody could carry around a bottle of Tippex and a biro), but when they saw all the dresses were similarly amended they honoured it. And then they took the £20 off that price as well, so I got it for £29.99 – barrrrrgain. That pretty much made my day I can tell you.
Looking on Quiz’s website shows that the on-line price is £59.99 so I definitely did well there.

By now my feet were starting to hurt and I was beginning to feel a bit “shopped out” so I stopped for a coffee, and then went looking for a handbag. However, I didn’t find anything I liked and my feet were really starting to complain by now so I decided to head home. 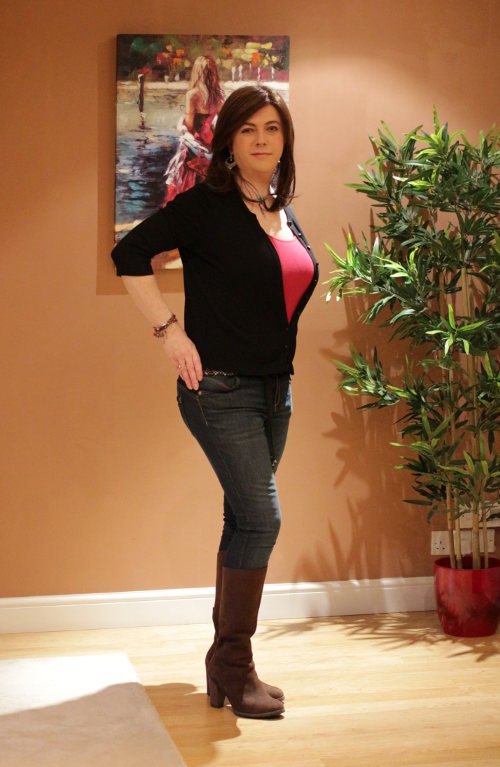 What I should have done when I got home is take proper pics of me in my new purchases, but I was quite tired by then and I didn’t feel like it.

However, I did take a pic of myself in the outfit that I had been “out & about” in, to go with the selfie I took in the car (which you will already have seen on Flickr).

I’m pleased with how this outfit turned out. The vest top (which is from New Look) is low enough to give the impression of cleavage, but not low enough that you can see the tops of my breastforms. It’s a close-run thing though. The short-sleeved cardigan offset it nicely too. Also it made it easy to try on dresses as I only needed to remove the cardigan, which is what I was aiming for when I put the outfit together. Mission Accomplished there, I feel.

So, all in all quite a productive shopping trip and I think I’m well on the way to getting an outfit together. I just need to decide on shoes, bag and accessories.

I’m hoping that I can get away with existing shoes. I have one pair of very elegant heels but they are agony to walk on within five minutes, so they’re instantly ruled out. The red ones from a previous pic might be contenders if matched with a red bag. I’m not sure if they are dressy enough but they’re certainly comfortable enough. Otherwise I have some black court shoes that have figured several times in these pics which might do the trick too.

Posted by Hay Llamas on 3rd December 2014 in Clothes, Shoes, and Jewellery, Diary, Out & About, Photos, Shopping