I had an absolutely fabbo day on Saturday!

I was going up to London anyway as I had another Voice Training session, but about a week or so ago I started corresponding with a really nice guy and since it seemed to be going well, we agreed to meet up after my session. We both agreed we’d just play things by ear and when one of us had had enough, we’d part.

Well, 7 hours after we’d met up we were still together, so something obviously went right! But I’m getting ahead of myself here.

The Voice session went really well. I can really feel a change in my voice, and have a lot more control over it now. I still think I need plenty more training but my teacher thinks I am getting to the stage where I could start attending group sessions rather than one-to-one all the time. It would certainly reduce the cost. So, after the session was over I walked to where we’d agreed to meet and we soon spotted each other. And no wearing of Carnations or anything like that necessary. Isn’t the modern internet age wonderful!

After a nice coffee / tea (respectively) and a good chat, which lasted a good 45 mins or so, we decided to go for a walk which took us through Somerset House where he very kindly agreed to take this lovely pic of me. I’m so vain. ha ha.
As you can see, I’m wearing that sweater dress and boots I mentioned in my previous post.

Much of the rest of the day was a bit of a blur really, but I do remember doing an enormous amount of walking and although the boots are really comfortable and are made for walking (ooh I think there may be a song there!) they were pinching my toes a little and could do with being slightly wider. A pair of boot stretchers may shortly be on order I think.

It turns out I’m not allergic to the Angora in the dress, but boy is it insulative! Despite it being quite thin, I was absolutely boiling whenever we were indoors, even with my jacket off! I think Arctic explorers should be issued with them!

Things were still going really well, so we decided to have some dinner together. Whilst there I noticed from Facebook checkins that some of my friends were nearby so we agreed to meet up with them after, and my friend took us all to the most amazing bar. It was The Friendly Society in Soho and is all really kitsch with much of the ceiling covered with Barbie dolls and Sindy dolls, all attached to the ceiling with screws through their tummies (bit gruesome), and with disco balls everywhere, and wallpaper that looks like it should be in a child’s bedroom. I loved it! 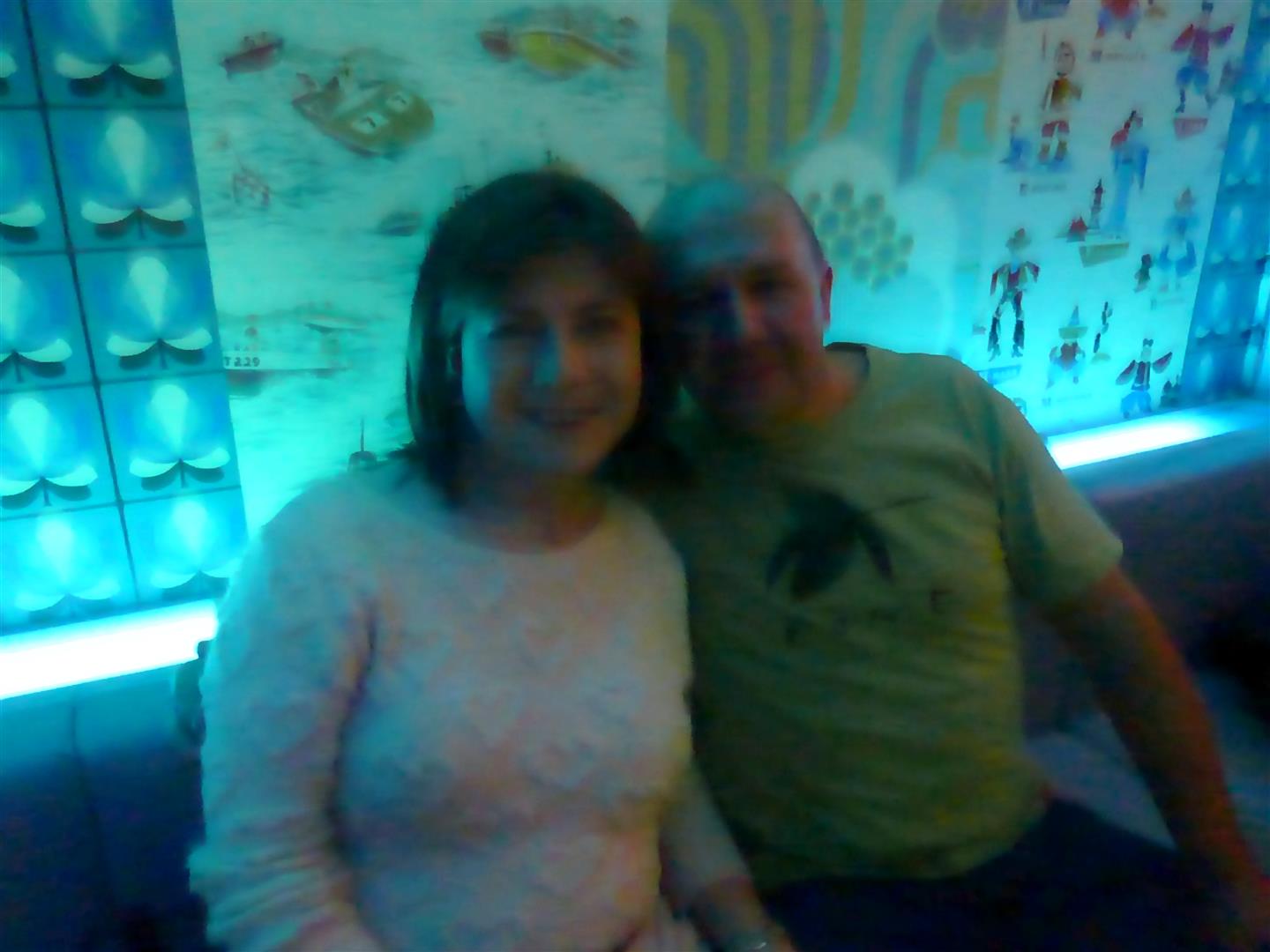 After a while, my friends moved on, and my companion & I managed to grab a table.

I tried to take a nice selfie of us, but with that a really nice guy sitting next to us with his boyfriend leapt up and offered to take the pic for us. He was so nice. In fact everyone was really friendly there – I guess the place lived up to its name!
He took a pic both without the flash and with it, but the one with the flash came out really badly so this is the non-flash one. Please excuse the fuzzy pic; I did my best to de-noise, sharpen and lighten it, but there is only so much you can do.

Anyway, it was now getting on for 10pm and although I was having a really wonderful time, I really was wilting and I desperately needed to go as I was a good hour or more from home. So my friend, ever the gentleman, walked me to the tube station so I could catch the tube to where I had left the car and I started my journey home.

I had such a great day. As I mentioned at the start, we did a lot of walking. In fact, my feet were pretty sore by the end of the day and when I got home and got the boots off I discovered that one of my toes on my left foot was numb and half the big toe on my left foot was also numb. The next day it still was, and even today (Monday) it is still a little numb so I think I will need to invest in those boot stretchers. But the boots are very new and definitely need to be broken in.

On Sunday I spent most of the day pottering round the house, feeling sore and achy from all the walking on Saturday, and ended up watching a lot of telly. I’m such a lightweight!