I have been on the lookout for some shelves to go above my dressing table, and finally found something suitable on Amazon from a seller on the Marketplace. They do two versions; both the same height and the same number of shelves, but differing widths. On the photographs, at least on cursory inspection, they looked to be the same so I made the assumption that they would be the same apart from width.
These were ordered at a cost of £87.90 (£75 + £12.90 delivery) for the pair, which I thought was a little steep although they had very good reviews on Amazon.

The shelves arrived sometime in the following week. They turned out to be sturdily made, consisting of 2cm thick shelves and end boards, with the back made from 1cm tongue-and-groove planks. Although sturdy, they felt a little hastily thrown together and slightly wonky (Note: as in, not straight. They weren’t wobbly or anything), but that could well be a Shabby Chic thing I guess. They were painted in a uniform cream eggshell colour, as advertised. For some reason that I can’t quite fathom now, I decided that the supplied colour was not suitable and that they should be white, and so ordered some white chalk-based Shabby Chic paint by Rust Oleum. 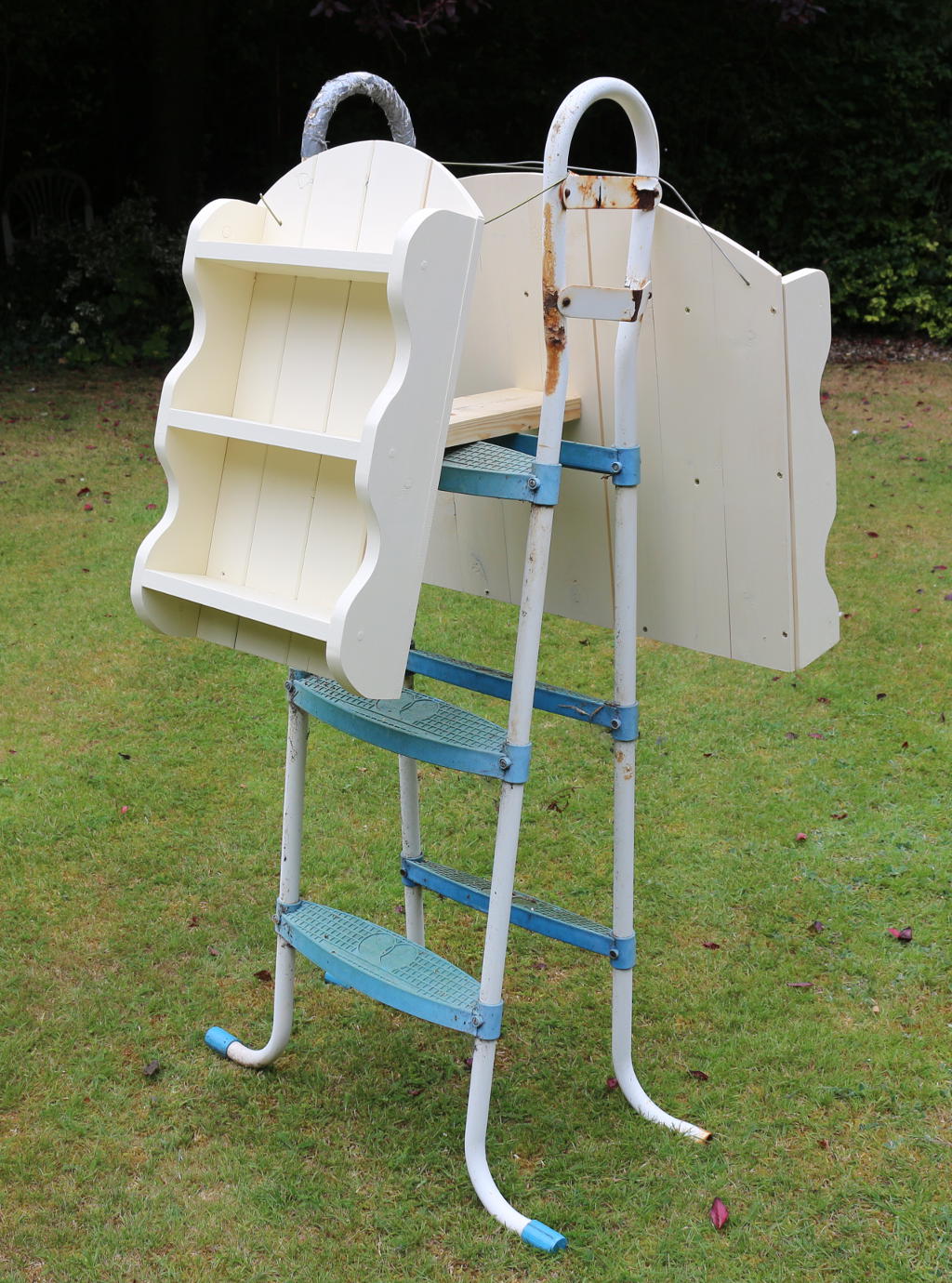 A few weeks later, when the weather was nice and I fancied tackling the painting, I wondered how best to paint the shelves and looked around the garden for inspiration. Sat in a corner, quietly rusting away, were the steps for a rigid-framed above-ground pool that I had once owned (and which gone to the tip many years ago). They’d been squashed flat, but were good enough for what I wanted. With the addition of two opened-out wire coat hangers I was able to hang the shelving units by their mounting holes using the steps as a frame.

It was whilst painting them that I realised they were not the same. On the wider shelf unit, the bottom shelf was flush with the bottom of the back board, whilst on the narrower unit, it was not and there was some back board below the bottom shelf. This was rather annoying and, of course, since I was in the middle of painting them they could now no longer be returned. However I figured that, given I was going for a Shabby Chic style, this probably didn’t really matter. In fairness to the seller, when I went back and looked on the photos on Amazon it was very obvious that they were not the same and also the seller didn’t even claim that they were. It was just a bad assumption on my part. With hindsight, I should have contacted the seller and asked for a price of a matching pair; one wide and one narrow. 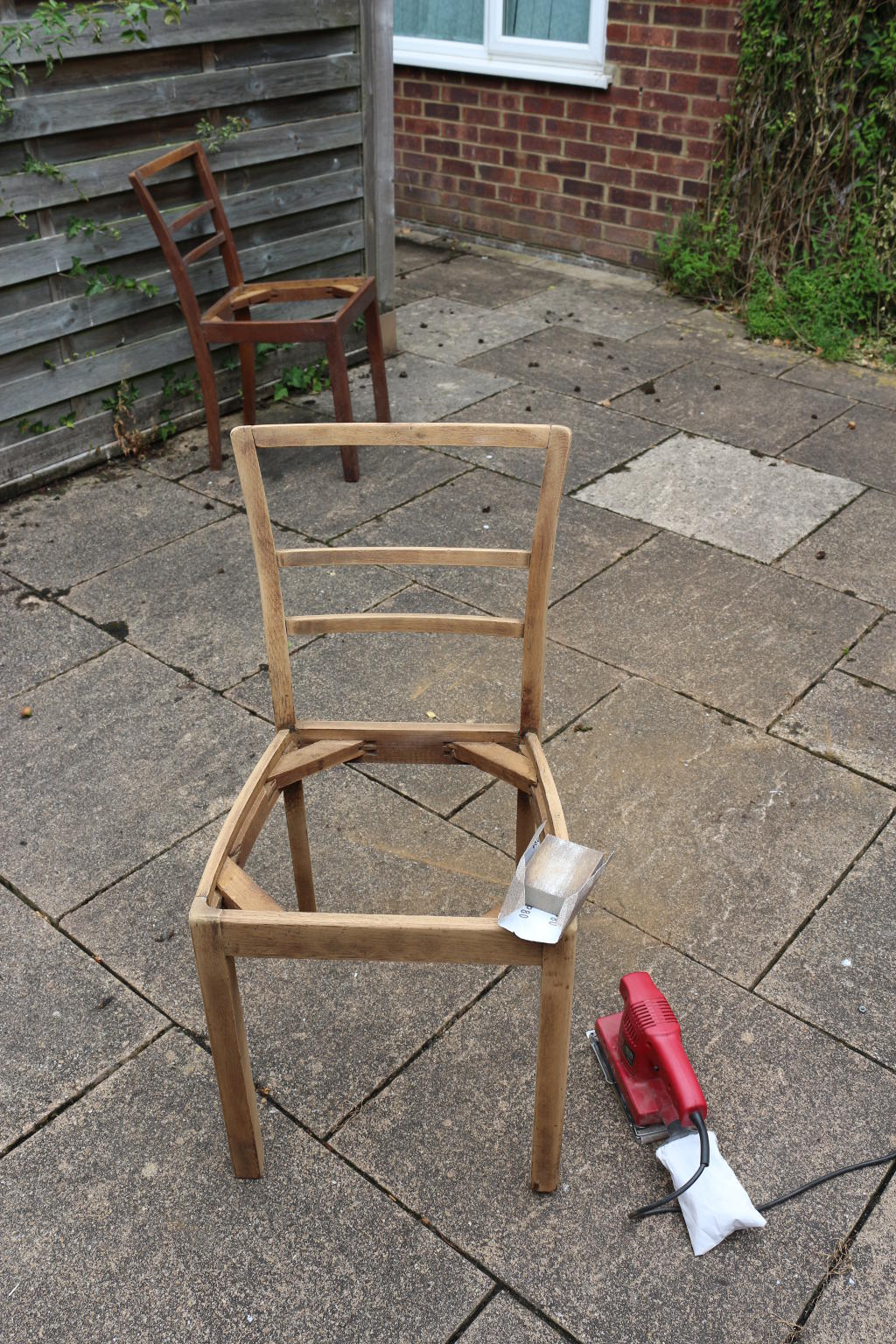 Also that day I sanded down one of the chairs using an orbital sander. Strictly speaking, this isn’t actually necessary when using chalk-based paint as it doesn’t require preparation or undercoat, but I did it anyway. It came up pretty well. I then painted it with the same chalk-based paint as I had plenty left over from the shelves. 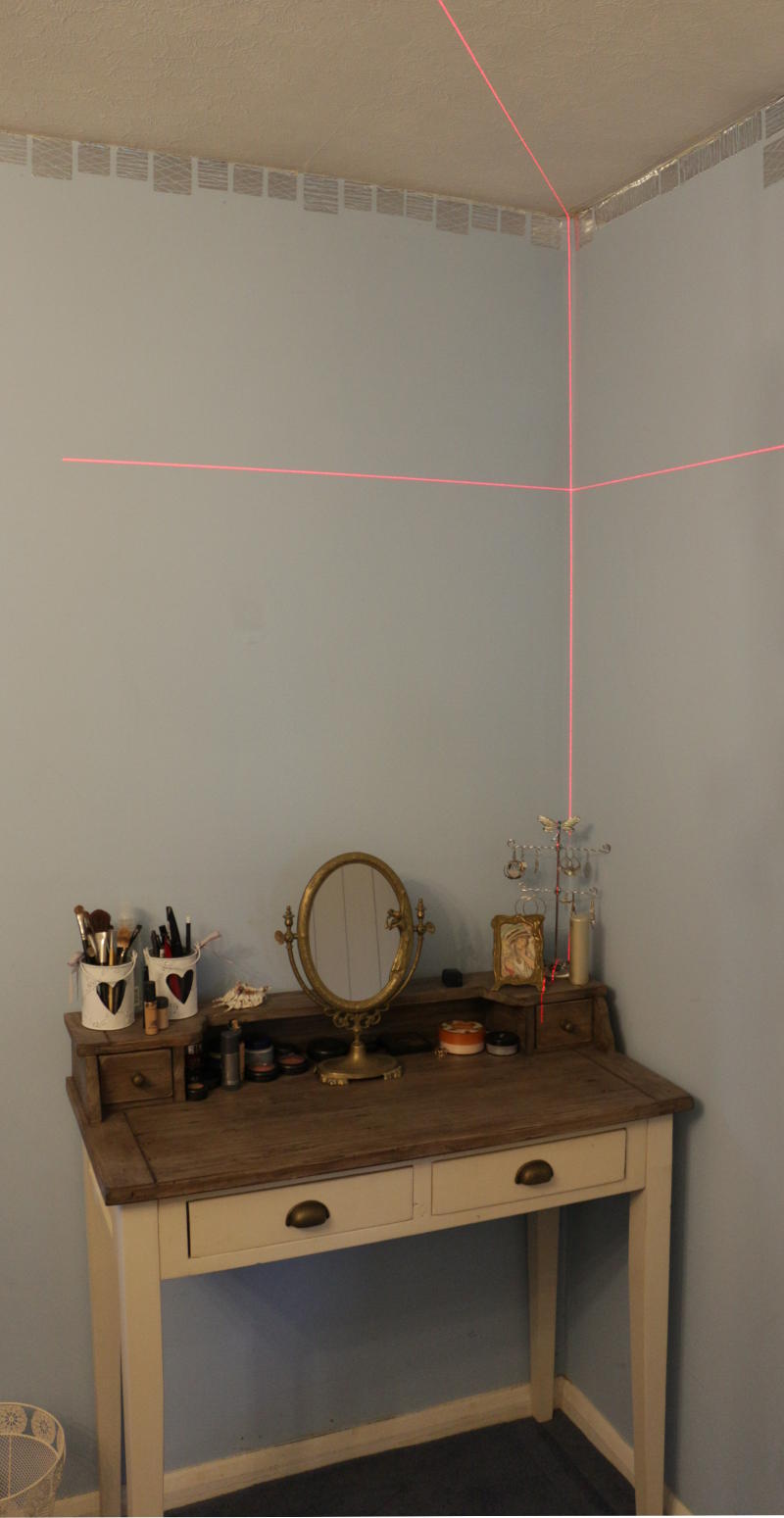 The next day, when the shelves were dry, I drilled holes in the wall above the Dressing Table for them, using my laser spirit level (pew pew!) to ensure they were at the same height and also level. When screwed to the wall I considered it a job well done.

Unfortunately, the next day in daylight, I realised I had made a terrible mistake on the colour. Although there is some white in my bedroom (from the wardrobe doors, the skirting board, the door to the en-suite shower, the ceiling, and the door into the room), all my furniture is cream. The white of the shelving units clashed quite horribly with the Dressing Table and the other furniture. And, worse, with hindsight the colour the shelves had originally been supplied in might well have sufficed. *sighs*

So back onto Amazon, and I ordered ‘Clotted Cream’ chalk-based paint by Rust Oleum, and also some Rust Oleum clear furniture finishing wax.

When those arrived, I took the shelving units down and sanded them and also the chair, and repainted with the cream paint. Then the next day, gave them a light sanding with a fine sand paper to smooth out the paint brush marks a little, and then applied the wax to seal them. 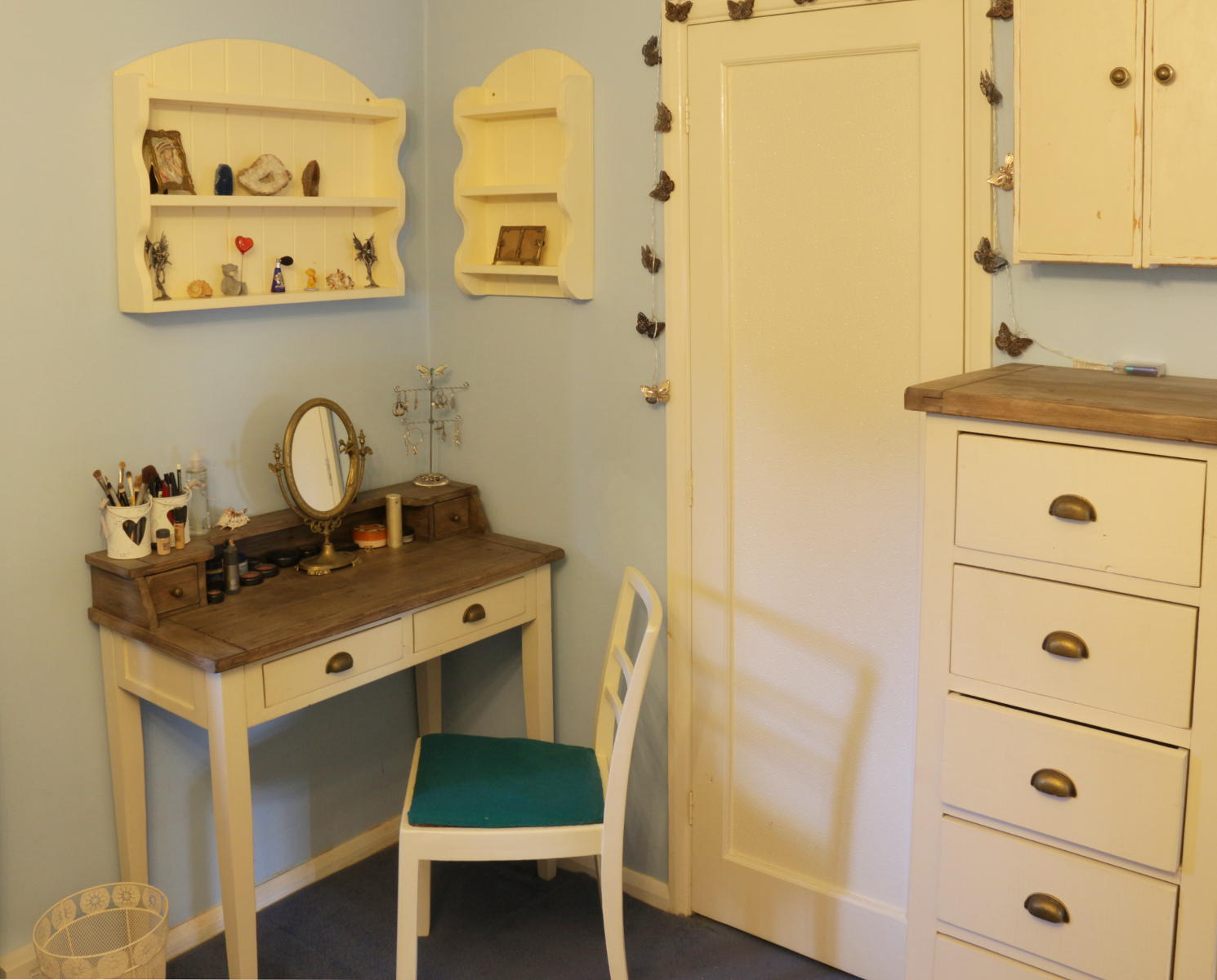 The result is much better, and I’m happy with it. The shelves are now back up on the wall and populated with some of the trinkets and nick-nacks I have bought during my visits to Antiques and Collectors fairs, although there is room for plenty more.

I’ve stayed with the original cover on the seat of the chair for now, but I plan to source some suitable material (possibly from an old pair of curtains) at some time and re-cover the seat.

I also need to find a lamp or wall light too, as that corner is a little dingy and needs some additional lighting.