I’ve been interested in photography for a very long time. In fact, back in the days before we all used digital cameras, I even had a darkroom and used to process my own Black & White 35mm film and make my own prints.

Lately I’ve been becoming very dissatisfied with the self portraits I post on Flickr, mainly in the area of lighting. So I decided it was time to do something about it. Some research online brought me to the conclusion that continuous lighting softboxes were a cost-effective entry. For sure, studio strobe flash would be better, but the cost is around three times more, like-for-like.

I found a nice studio starter kit on Amazon, which includes two softboxes with tripods and bulbs, a backdrop frame, three different backdrops (black, white, and Chroma key green), some mini clamps for attaching a backdrop to the frame, and a bag to put it all in. The Amazon price was £92 but I was lucky enough that they also had one through their Amazon Warehouse outlet for £70. Ostensibly second hand, it turned out to be brand new with all components still sealed in their original packing and unopened. The outer packaging was a little beat up, which maybe was why it was made available through the Warehouse. So a bit of a bargain there!

I was fairly pleased how my “In the Storeroom” shoot had turned out (especially all the views, faves and nice comments that I’ve had), but I really wanted to revisit it and do it better. In particular, some of the poses were a success but the photos themselves unusable. I also wanted to try a nicer blouse and better lighting.

As I mentioned in my previous post, I found a seller on Amazon Marketplace called Yasong who were selling what looked like the ideal blouse. They’re based in China so I knew I was in for a long wait, and sure enough it did take several weeks to arrive. Fortunately, when it did finally arrive the sizing was just right and so was the fit. Yay!

On the day of the shoot, I arranged the items on the shelving in a better way and paid a lot of attention to how it looked, and then set up the lighting. 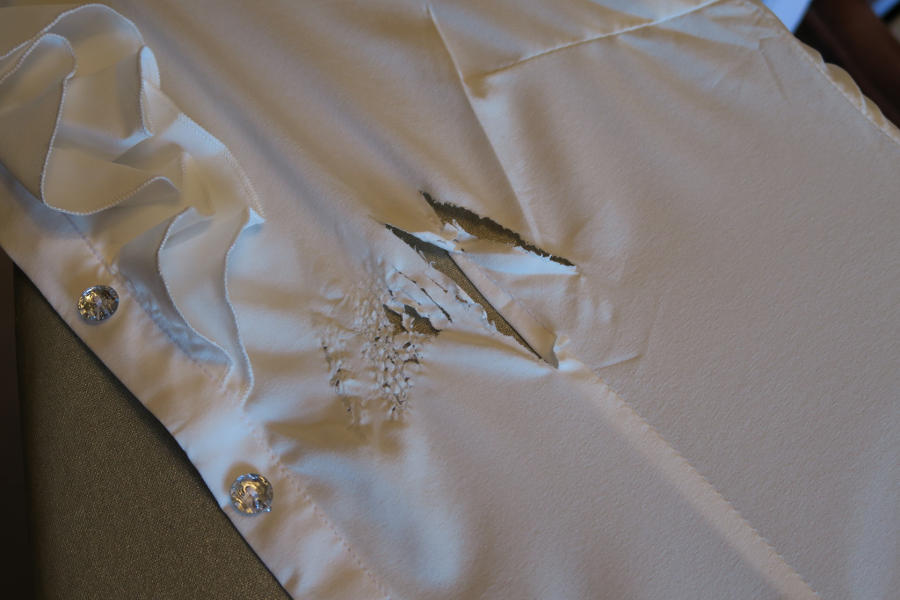 Before I started on my make-up, I decided that the blouse could do with a quick iron before wear, so set my iron to a medium heat and when it was up to temperature started to iron. Within a split second I knew something was wrong as the iron didn’t glide, so immediately pulled it back to see, with horror, that the blouse had instantly melted. To say I was upset was an understatement.

I must confess that I almost aborted the whole shoot at this point, but instead took a few moments to calm down, posted my woes on my Facebook page, and had a cup of tea. Talking it through with people on that Facebook post made me realise that the blouse might still be usable as the damage was just on one area over my left breast and if I shot the photos with my right side towards camera, the damage would be partially hidden and could be corrected post-process in Photoshop (well, GIMP actually). So the shoot was back on. 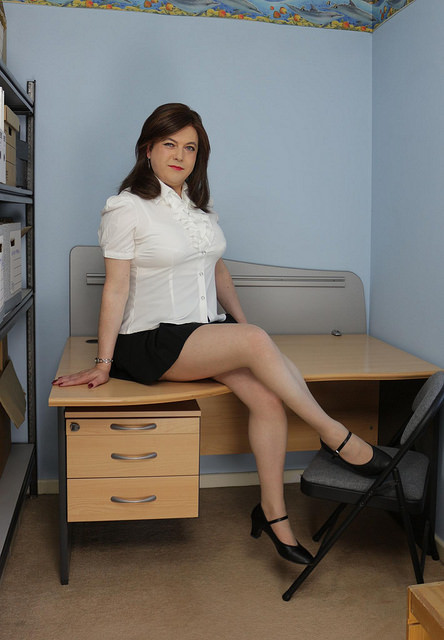 I took quite a few pics in the storeroom, and was really pleased with how they turned out. I also gained good experience with the lighting, working out what worked and what didn’t. It turns out that it is quite easy to over-light the subject – perhaps I need to add dimmers to the two lights (that’s assuming that the bulbs are dimmable; I will have to check).

I’ve only posted one pic from the shoot so far. More may follow, so be sure to keep an eye on my Flickr page!

Next, I set up the backdrop frame in my lounge and moved the lighting and camera down there too, then got changed into a PVC corset dress I recently bought, plus my trusty Doc Marten stiletto boots. Unfortunately this shoot was a bit of a disaster and none of the photos were usable. However, it was a good opportunity to play with backdrops.

For my next shoot I’d like to play around with the Chroma green backdrop and have some fun pasting myself into different scenes, as I already have some experience in doing this in GIMP from other projects. Maybe a picture of me on a beach? Who knows.