I had the day off on Monday, so went to the IACF Antiques and Collectors fair at Newbury Racecourse. Or, more specifically, I took the day off so that I could visit it.

You may recall that the last time I went, back in April, there was terrible traffic congestion due to roadworks with three-way temporary traffic lights on the approach road that were causing absolute mayhem and gridlock. Fortunately, this time was much better and I breezed in without delay. However, I did note that the approach road that had been subject to the roadworks last time was in an appalling patchwork condition now and is evidently long overdue a proper re-surfacing. It’s a shame they couldn’t have done that at the time whilst they were causing traffic chaos. 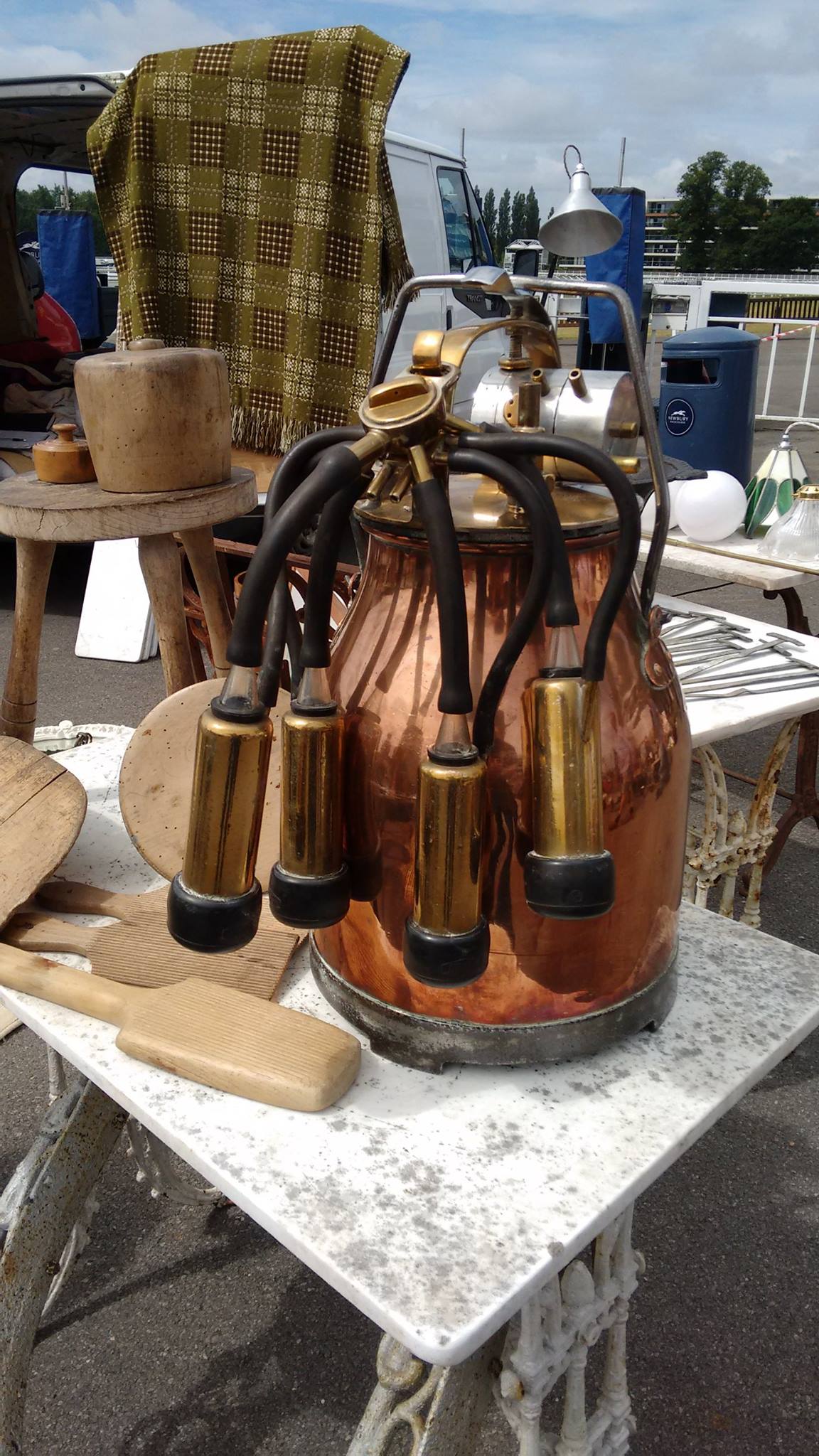 I’d no sooner got on-site when I saw a lovely antique cow milking machine thing, which of course I had to take a photo of and post a groan-worthy pun on Facebook. I apologise to those of you who follow me on Facebook. 🙂

I didn’t enquire how much it was – it looked expensive and I really don’t have anywhere in my house for it.

I mooooved (groan) on to the next seller and spied a framed collection of six advertising postcards from the early 20th Century. The frame wasn’t anything special and the postcards were of indeterminate age, but for £5 I didn’t think it mattered too much so I bought it.

After a while I noticed a camera crew, then my eye was drawn to two chaps in blue polo shirts with a BH logo who were being talked to by a third who appeared to be telling them about an item they were looking at. Then the penny dropped and I realised that I was witnessing an episode of Bargain Hunt being filmed.

The team were looking at a large fossil (you can see the expert picking it up in the photo) and debating whether to buy it or not. The seller was prepared to take £65 for it (I don’t know what the sticker price was) and they were undecided. Eventually they decided to leave it and to move on. 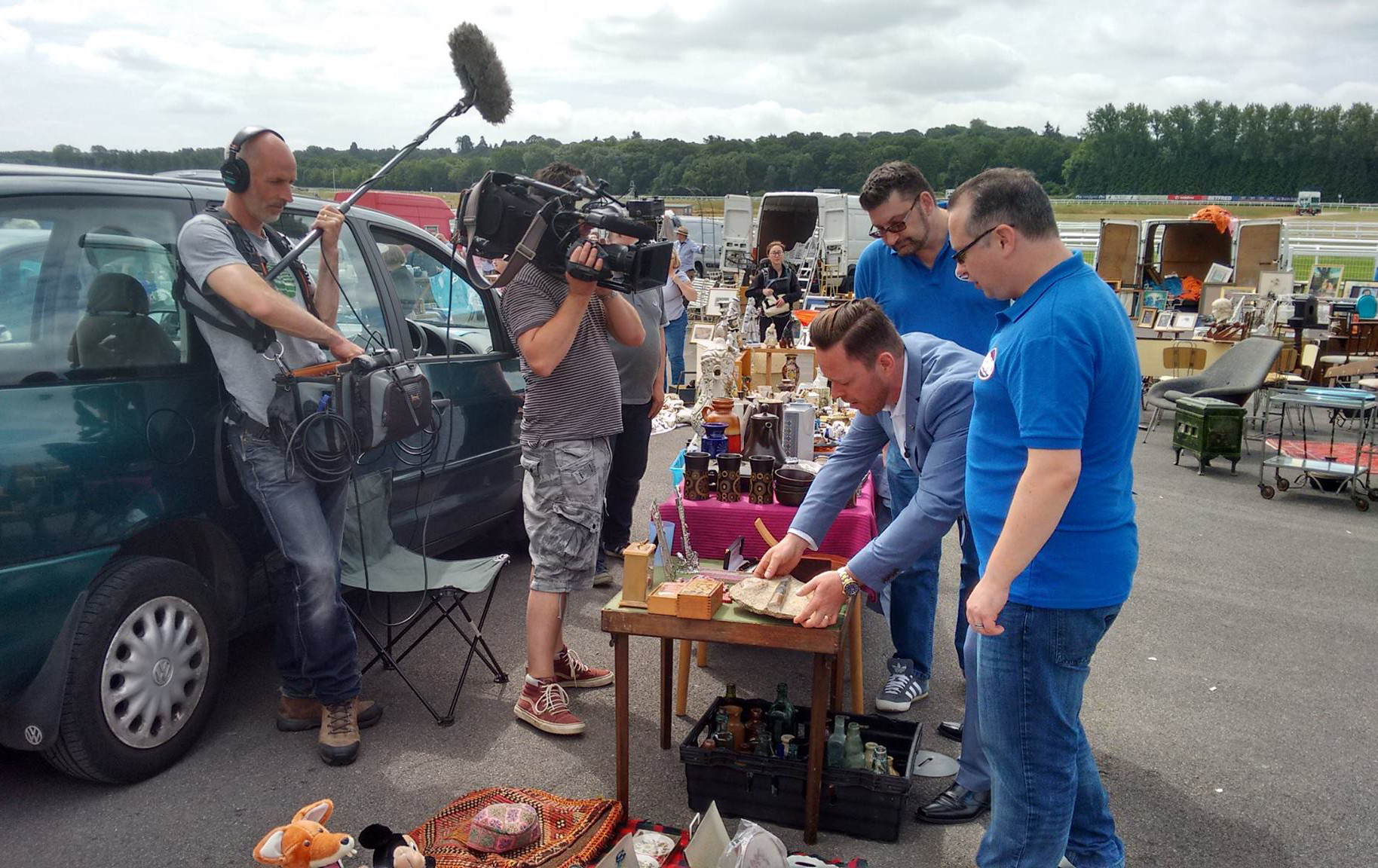 I talked to the seller afterwards, and he was enthusing about the piece.

“I’ve never seen a fossil on Bargain Hunt,” he said, “so it would have been good if they had bought it.”

“What about Tim Wonnacott?”, I replied.

I continued my browsing, and it was very quickly apparent that there were far more sellers this time than the one back in April. In fact, I overheard one seller saying to another that they had never seen it so big before, and that certainly seemed to be the case with the outdoor area stretching way further into the distance than before and also visibly much, much wider.

Also, and I don’t know if this was new or if I failed to spot it last time, there was an indoor area in the ground floor of the hall under the “Dubai Duty Free Grandstand” that was easily 2/3 of the size of a Sandown Park fair or roughly the size of the Epsom Downs Racecourse fair I went to back in April (which I didn’t ever blog about). The indoor area was selling the usual stuff you’d expect to find in one – jewellery, memorabilia, postcards, Militaria, pottery & ceramics, glassware, and the like. 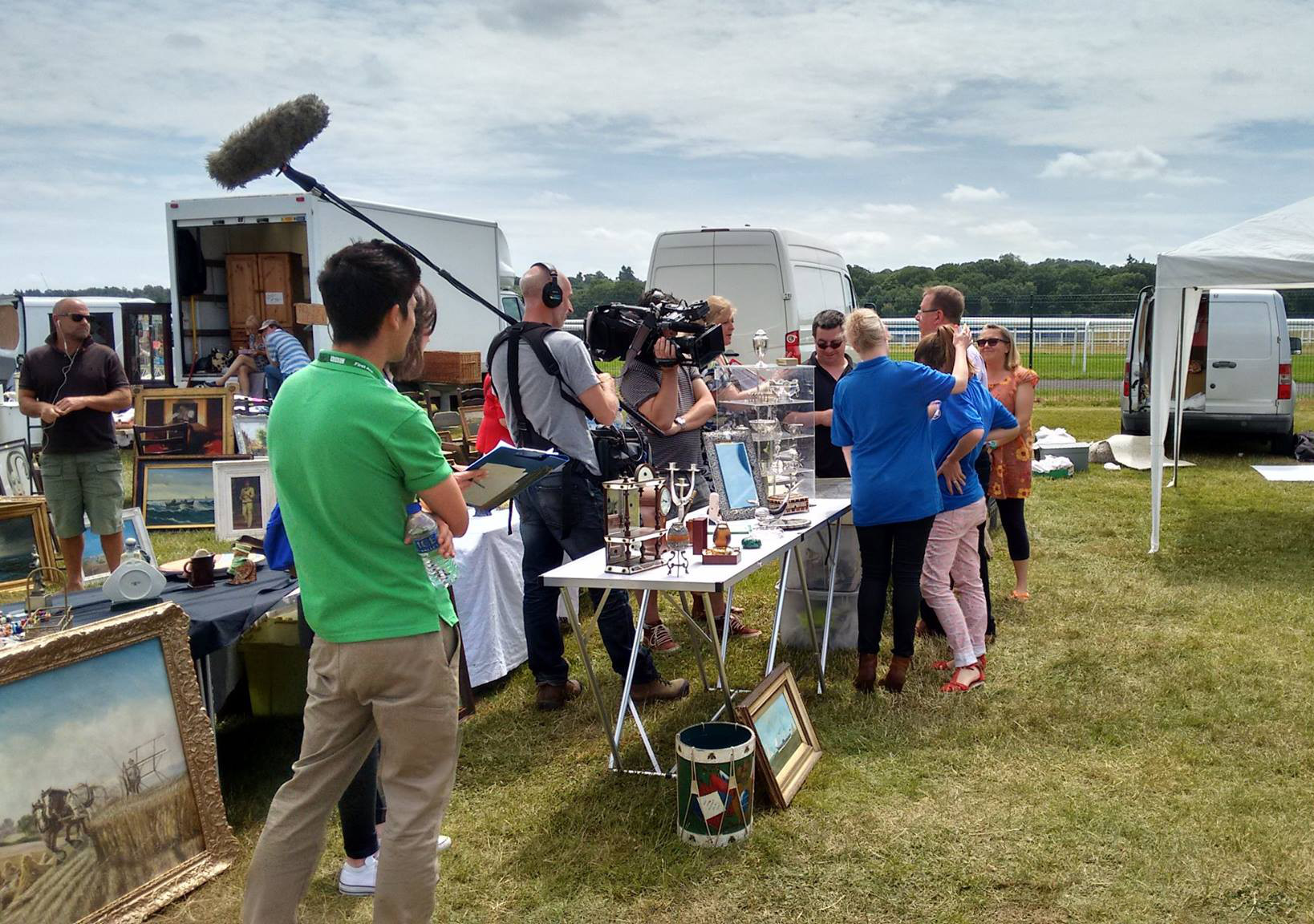 Back outside, and I came across some more filming for Bargain Hunt. This time the contestants were two girls, also in blue Polo shirts (so it must be one of those “double header” episodes you sometimes see), and this time I recognised the expert; Mark Stacey. I didn’t see what the girls were buying, but I did get within earshot to hear the director telling the girls they needed to do a re-take and telling the girls what to say and how to react (“Could you maybe say ‘oh that’s so sweet’ and put your hand to your chest as you do?”). It was an interesting insight into the scripting process. 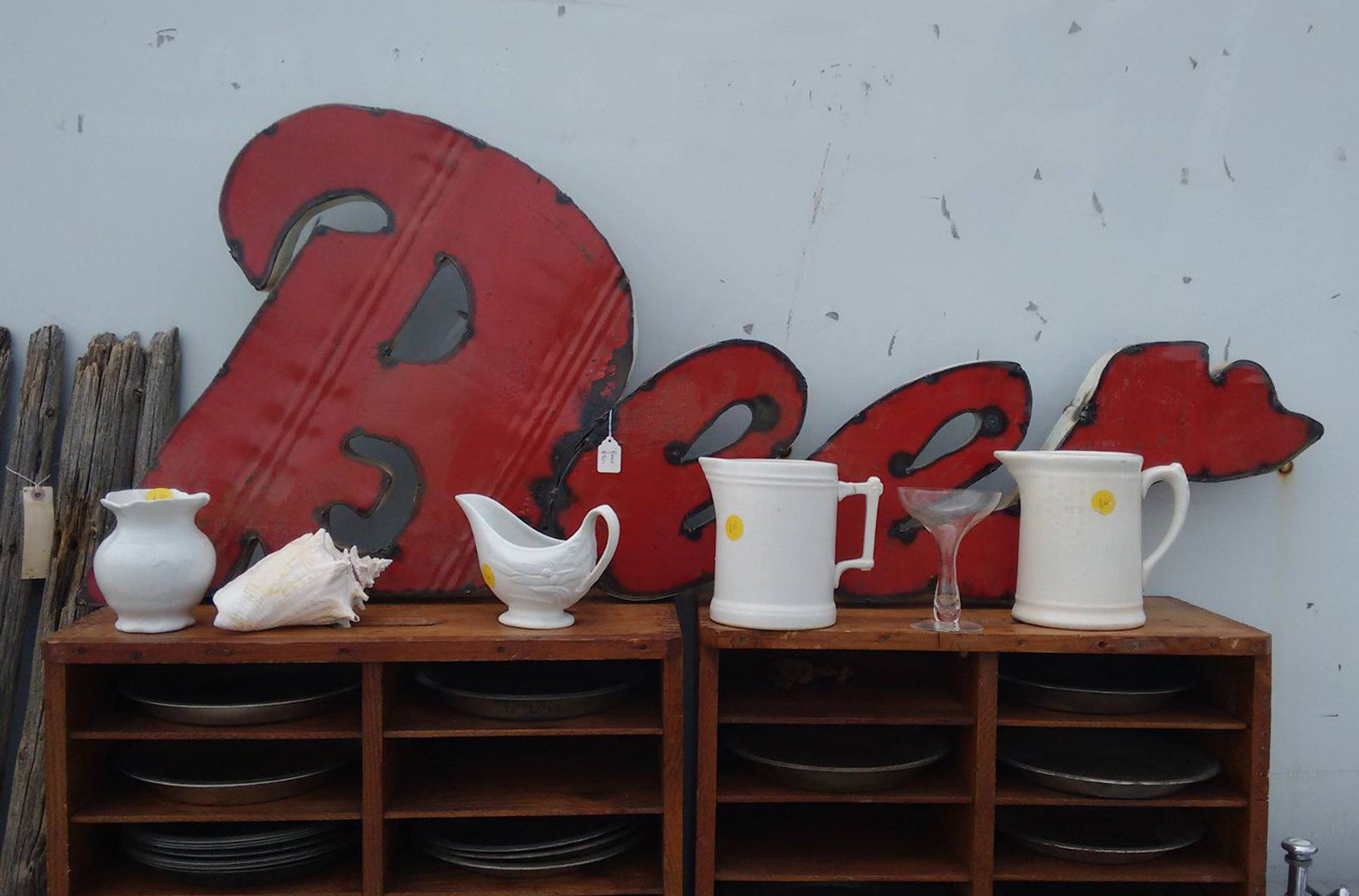 One seller had a large Beer sign that I thought was quite cool, but to be honest I couldn’t think where in my house I could possibly put it, so I passed.

About halfway down the outdoors area, on the hardcore past the asphalted area and before the grass area, was a burger van, a drinks van, and an ice cream van. I was quite hungry by now, so had a container of chips at a rather steep £3, and continued on down to the grass area which was easily several times larger than back in April. In fact it covered a huge area and was rather a lot of walking. The chips proved to be not that nice and pretty soon I wanted to bin them, but there were no bins anywhere. I ended up carrying the container around for almost an hour getting more and more annoyed until I finally returned to where the vans were and found one solitary overflowing bin and was finally able to ditch them. I think this was rather a poor showing by IACF and/or Newbury Racecourse. They really should have positioned some bins down there.

I hadn’t found anything much I wanted to buy. There was a length of thick heavy hemp rope that was exactly what I want for my nautically-themed cloakroom, but it was rather short and also one end was terminated in a metal hoop which I didn’t really like. Also the seller wanted £45 for it, which was more than I wanted to pay for something that wasn’t exactly what I wanted.

Another thing that caught my eye, again for the cloakroom, were some plastic lobsters. They had a certain kitsch appeal to them and I liked them. The seller wanted £10 each for them though, and I wasn’t sure I liked them enough to start haggling them down to about half that which is what I thought they were worth. So instead I passed.

As I headed back up to the Dubai hall, I finally saw Tim Wonnacott and he was preparing to do a piece to camera.

A nearby seller called to him “Are you still here then?”

“Of course I’m still here! Why wouldn’t I be?”, responded Tim, coming closer to the seller.

The seller replied that the teams are only meant to be here an hour and they had been there all day. Tim didn’t make a lot of comment to this, but instead showed the seller a disc-like object in his hand and was about to tell the seller about it, but was then called over to the camera as it was now set up.

It turned out the that object was the hand guard that is part of the construction of a Katana – the Japanese Samurai sword. I actually knew a little of this already as I have such a sword in Second Life that is made by someone who has a great passion and interest in their construction and models the individual parts that are analogous to the real life construction and then assembles these together into an accurate model of a Katana in Second Life, along with a scripted version on a floor mat that disassembles and reassembles so that you can see how the individual parts are put together. So I already knew this as a Tsuba. Tim took several takes to camera to explain this to the viewers, although didn’t use the Japanese name “Tsuba” and merely called it a ‘hand guard’. But he explained how it is slid down the blade to the hilt, in order to be fixed there, and also (rather unnecessarily, I thought) what a hand guard actually does. 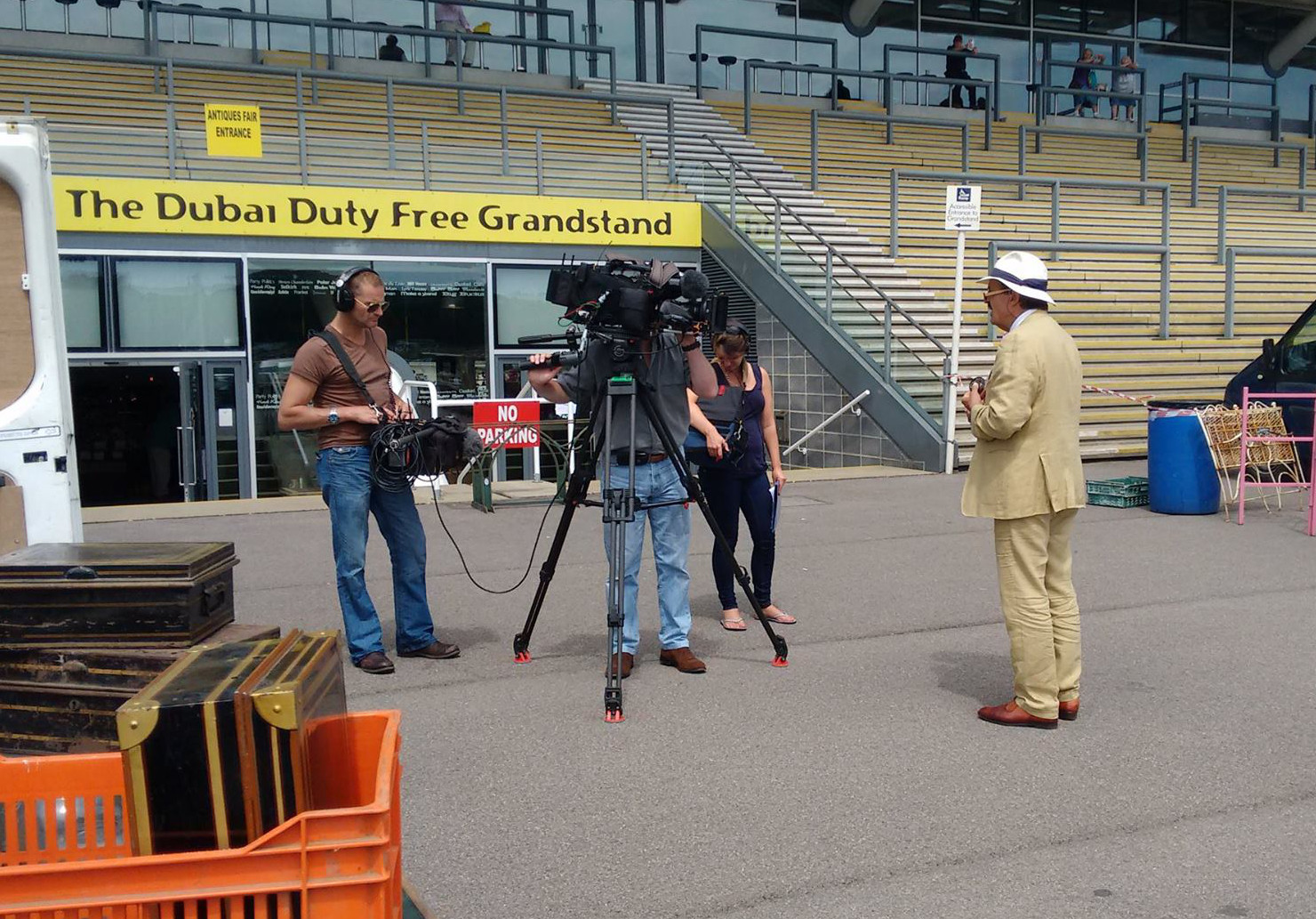 I really wanted a picture of me and Tim together, but at this point I should confess to you that I was in guy mode. I had decided on this for several reasons, one being that I simply didn’t have the enthusiasm to go in girl mode. The other being that it was very hot day and the thought of being in a wig, and in makeup, and in impractical shoes, didn’t sound too appealing to me when I could be in jeans, t-shirt, sandals, and an Australian bush hat. In many ways I think I made the right decision, but I did wish at that moment that I had been in girl mode as I would have definitely have asked Tim for a photograph of him and me together otherwise. When he was free, of course – I wouldn’t have interrupted him when he was trying to film.

I’d been on-site quite a while by now, and was pretty hot and pretty tired, so I headed back to the entrance which took me past the seller with the fossil. It was still there and he said that, no, the Bargain Hunt team had not been back. I did notice next to it a ceramic crab and matching lobster. Although they were red, rather than the blue and white of my cloakroom, I thought they were a bit of fun and asked about them and how much they were. The seller said he thought they were Portuguese and that he’d do them for £12 for the pair, and on a whim I offered £10 which he accepted. I’m not entirely convinced I made a good purchase there, but we’ll see when I try them out in the cloakroom.

After that, I thought it was time to head home. Unlike last time, there were no queues to get out, and I wasn’t held up at all and made it home in good time.