This is Part 3 of my restoration of an Art Nouveau cabinet which I had bought and whose base was riddled with woodworm.

As you will see from Part 2, it was my intention to use 18mm MDF to construct the new base. I decided that it would be best to use dowel joints to join the base to the bottom rail. I thought it best to practise on some offcuts of MDF first. 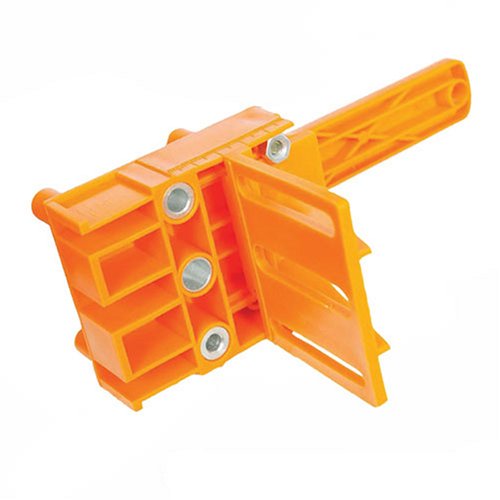 My first attempt was to measure carefully and then drill by eye. This was a bit of a disaster. Despite several attempts, I just couldn’t get the holes to be perpendicular, which meant wonky joints. I decided that I needed a jig.

I bought a cheap jig for under £7 from Amazon and tried again. Also, I used an offcut of MDF for one side, and some harder wood for the other side as I felt this would be more representative. I think perhaps that I didn’t drill the holes deep enough, and one dowel was a little snug, so I hit the two halves with a rubber mallet to seat them, the MDF just disintegrated. 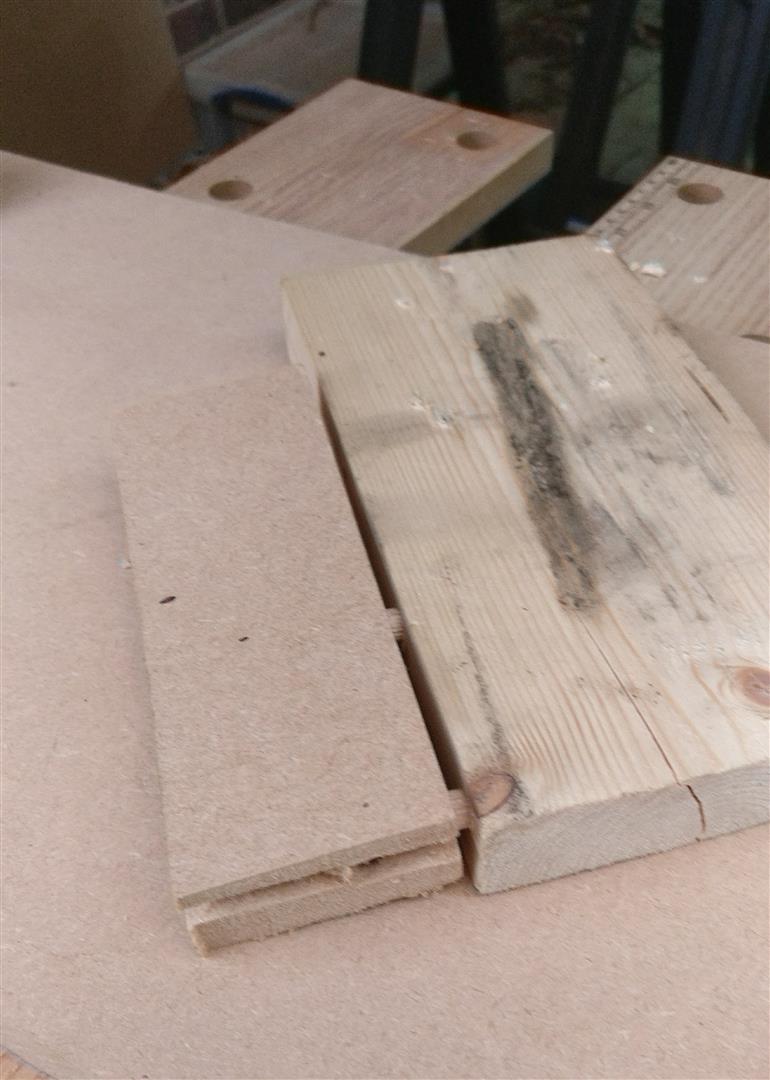 This setback made me question my decision to use MDF. In fact, the more I read about it, the more I am thinking that it is the wrong material to be using. I’ve therefore decided to abandon the use of MDF (I am sure I will reuse it some other way at some other time, perhaps as an extra shelf in an IKEA cabinet) and instead go with the same construction as the original base. Having measured that with a Digital Vernier Caliper, it is nominally 4mm for the upper plywood layer, 14mm mitred softwood for the middle layer, and contrary to what I previously thought, nominally 4mm plywood on the bottom. Although it looks like it may have had a veneer on the underside. Having researched plywood online, it looks like 3.6mm plywood is a much more common thickness so it could be that with some minor expansion. Or maybe it really is 4mm ply. I don’t know. However, the thickness of the bottom rail is 23mm, which suggests 4mm ply.

Using a sandwiched construction means I can dispense with dowel joints and glue & screw the base to the bottom rail instead. A friend has suggested that I don’t actually need to screw it (or use dowel joints were I to stick with the MDF idea) as wood glue would be sufficient given the base will be screwed to the cabinet sides. But I think I will glue & screw as it gives me more confidence of a solid construction.

Also, using the same sandwich construction that the cabinet originally had is a more sympathetic restoration.

With that decided, I moved on to cleaning up the feet.

I pulled old nails out with a Carpenter’s Pincer which I have owned for decades. Unfortunately in doing so I managed to break the tip of one of the leg brackets but managed to glue this back again with wood glue. Unfortunately I forgot to take a “before” pic. I’m quite pleased with the repair, even though you can see the joins, because it broke off two pieces and I managed to reassemble it like a little jigsaw.

I also used an orbital sander to sand off the old glue from the tops of the legs, and in one case the glued-on residue of the woodworm-eaten soft wood.

The next job is going to be assembling the new base, for which I will need to make a shopping trip, and also to buy some Woodworm Killer and treat all the existing woodwork; especially the mouldings which I will be reusing as they have woodworm holes in them and I’m not sure if there are any dormant larvae in there.

In a previous post, I mentioned an Art Nouveau cabinet which I had bought and whose base was riddled with woodworm.

At the time I thought it was beyond economic repair. However, I decided that I had little to lose by stripping it down to get a better idea of the extent of the damage.

Prising off the plywood base, I found some mitred soft wood that was heavily damaged by woodworm (but no evidence of live larvae), with thicker laminate ply above. So the base was a sandwich of thicker ply upper, mitred soft wood, and a thin ply underside. I removed all of that, carefully peeling away the silk backing that was glued to the top of the base. 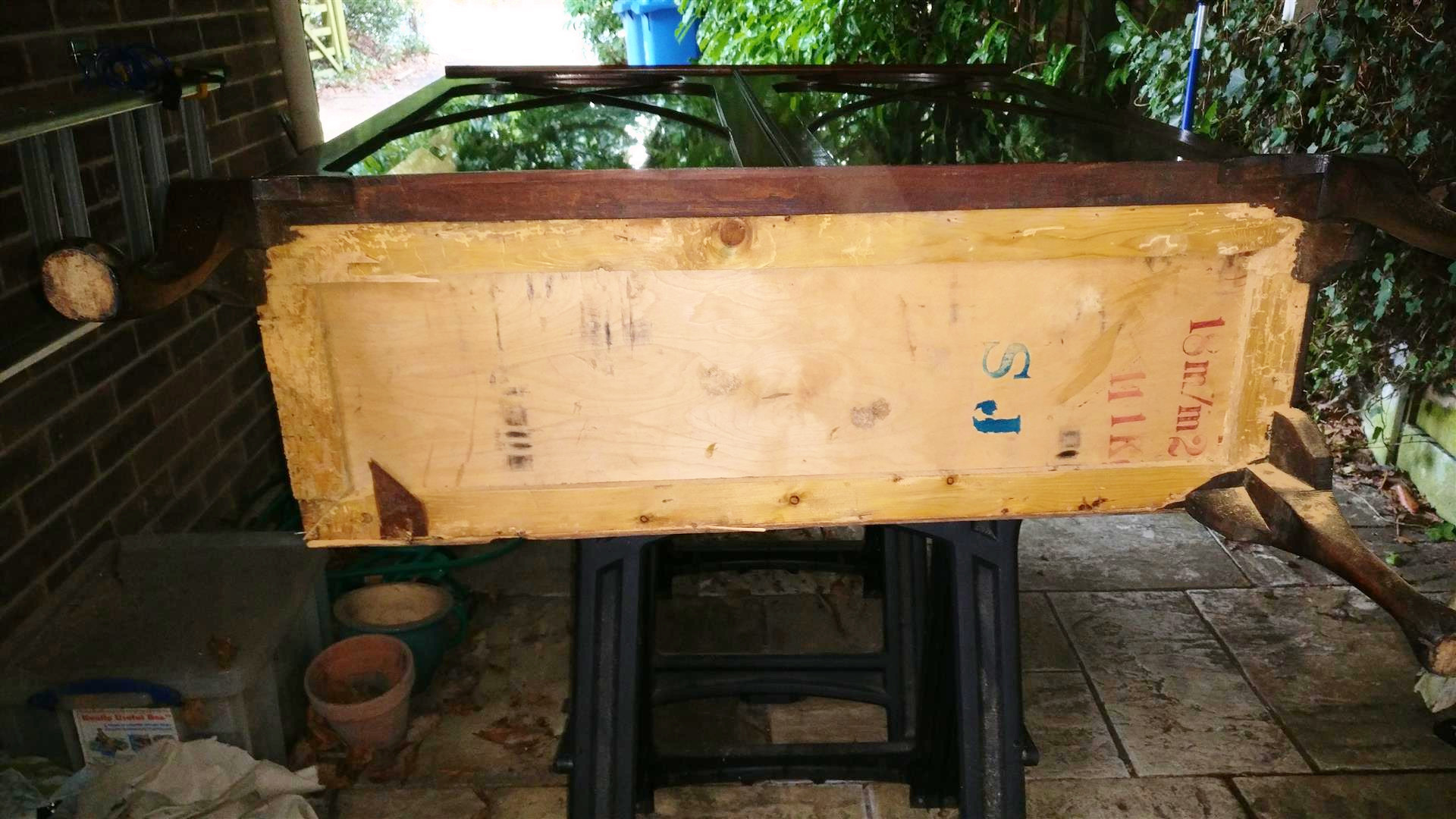 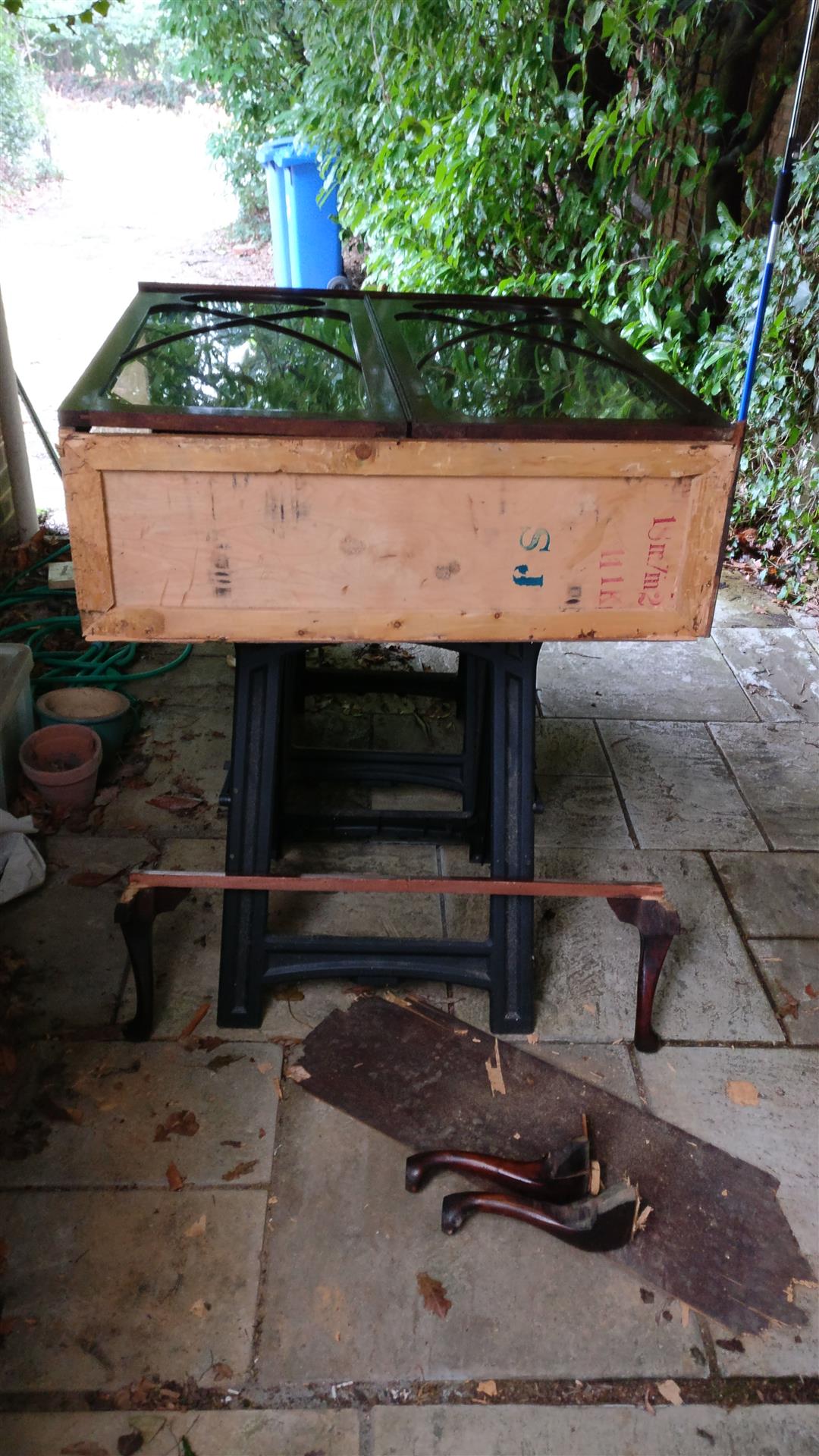 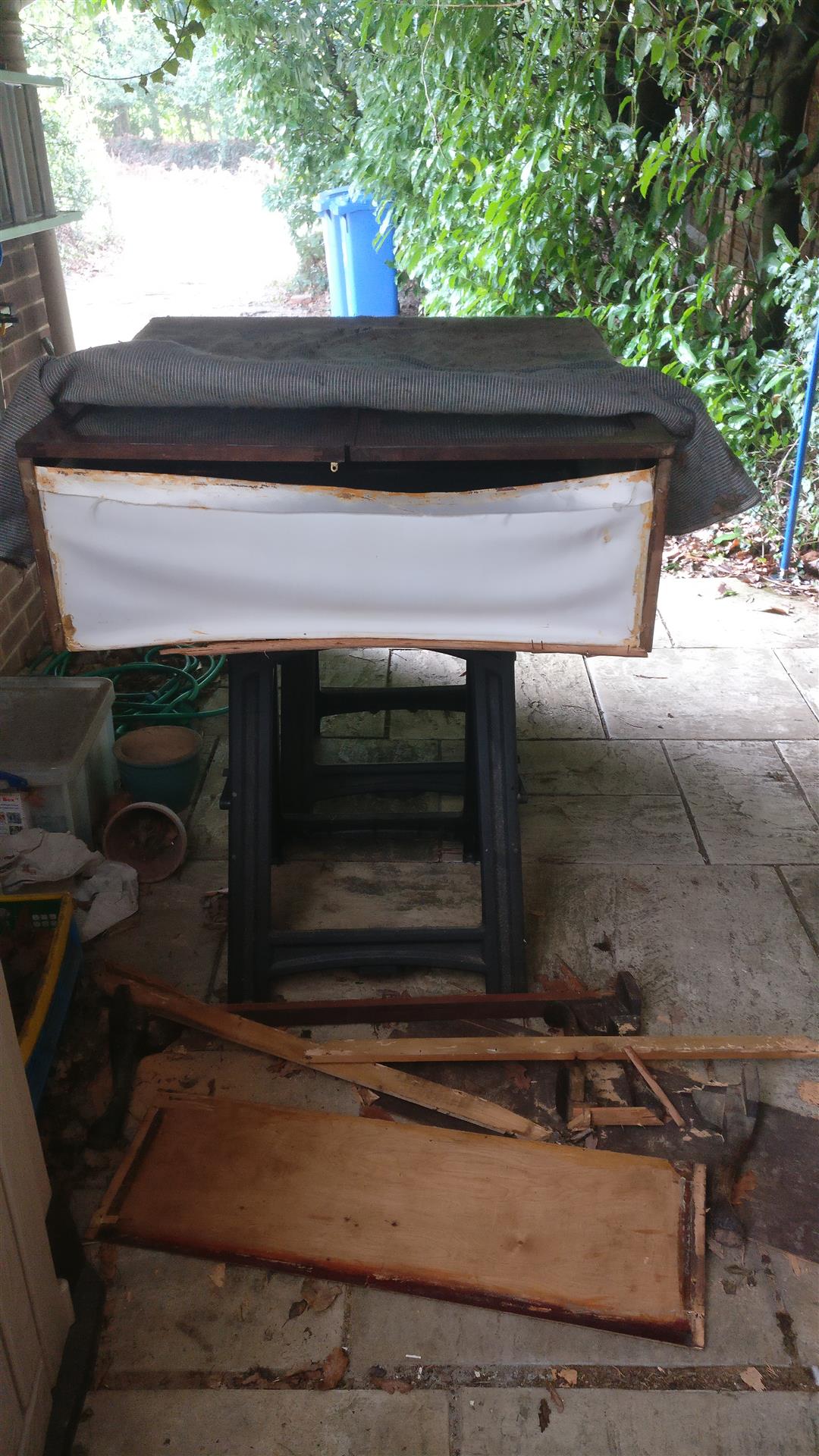 Once that was away, I could see that the hardwood of the cabinet itself was free of woodworm, as were the legs.

With hindsight, I think I could have left the thicker ply upper base and replaced the mitred soft wood and lower base panel, but it’s way too late for that now.

The edging strip to the front was sound, and very secure, so I decided to try to save that if I could. The side ones are a bit beat up, with heavy woodworm damage to one of them, but I think it is better to keep these rather than trying to fit a new strip, which would have to be mitred and stained to match. I might be able to sculpt the missing bit with wood filler. Fortunately it is on the back edge so will be less visible. 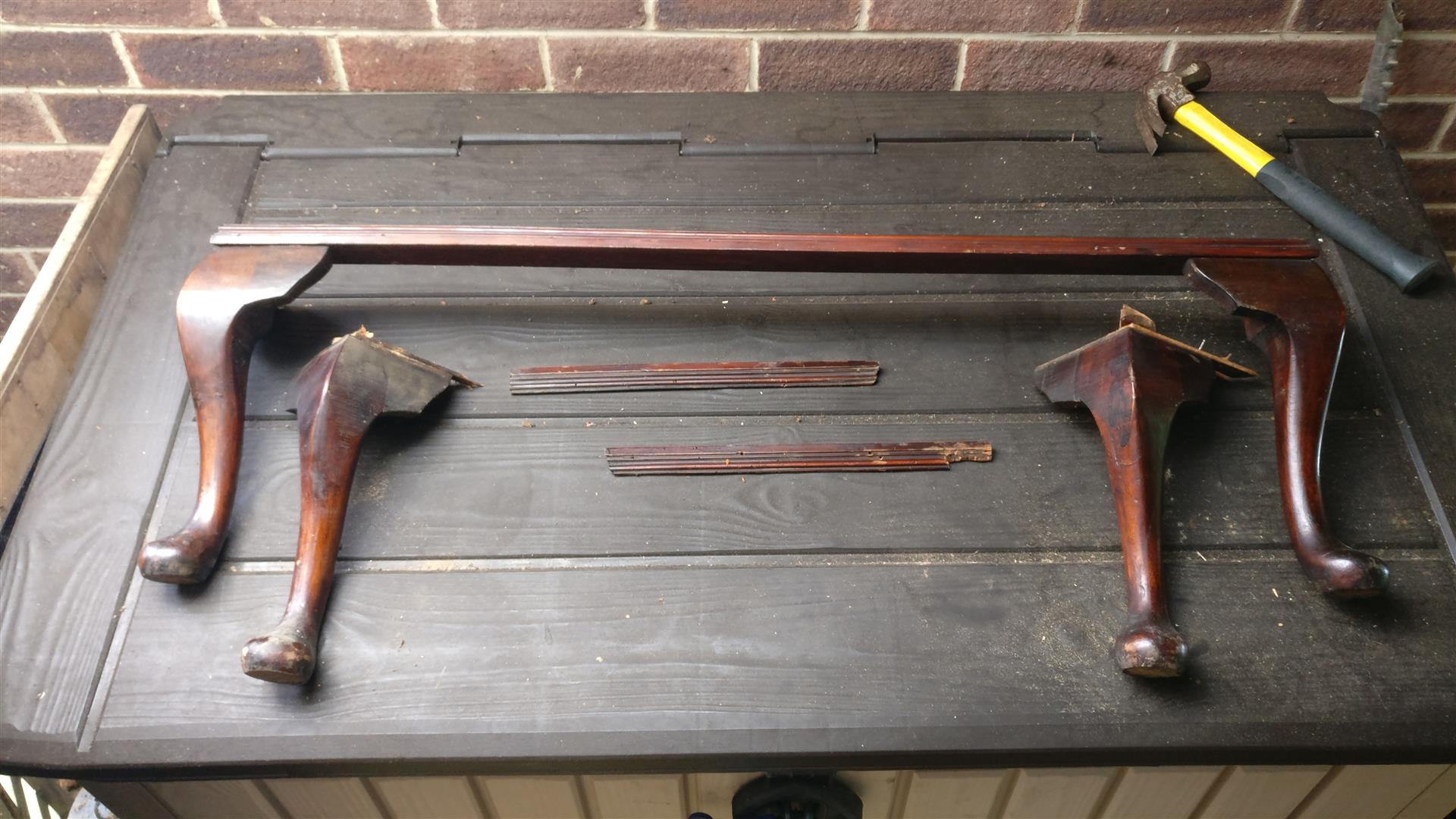 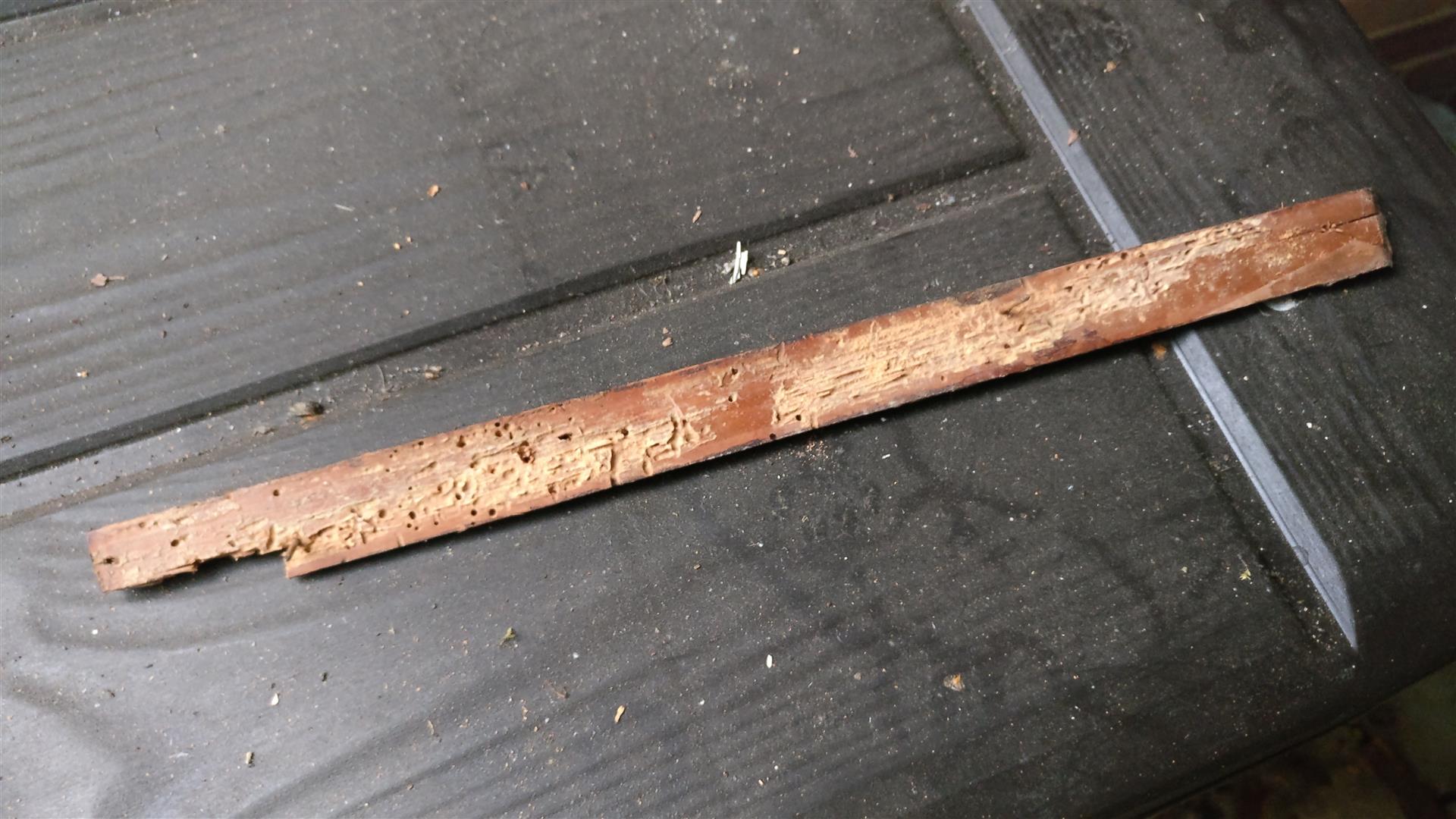 Unfortunately I damaged the back whilst removing the base, so cut that back flush. I don’t think it is going to matter too much as you won’t be able to see it when it’s against the wall. If it is an issue, then I can always make a repair strip. 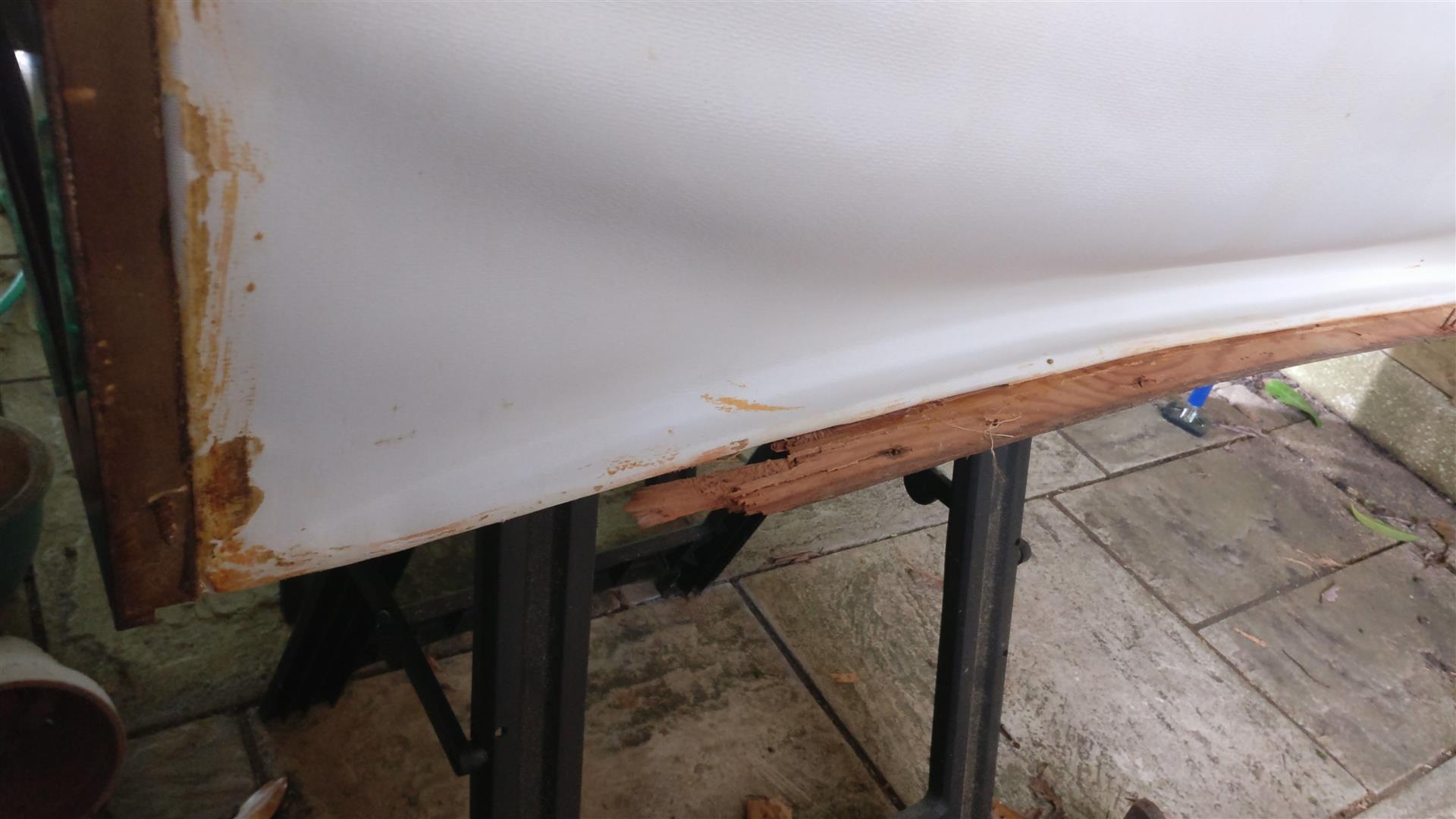 Next job was to cut off the captive screws that had held the base and cabinet sides together, remove any old nails, and generally tidy it up. 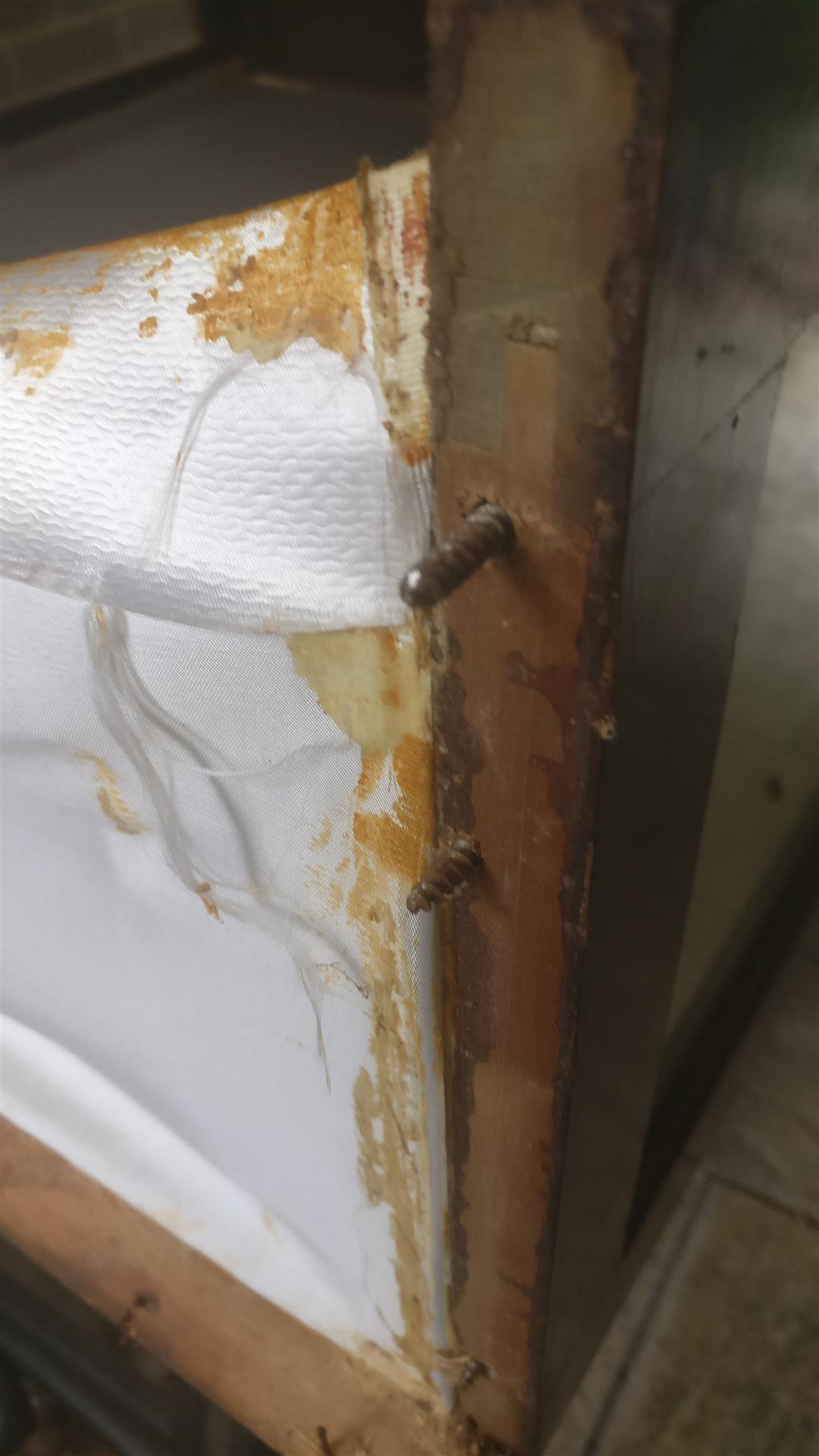 For the new base, I decided to go with 18mm MDF which I used a Rosewood wood stain on. Dark Walnut would have been better, but I had the Rosewood anyway and decided to save money by using what I had. It’s not like anyone is going to see it anyway, as the only part of the base that will be visible is the underside which will be in shadow. 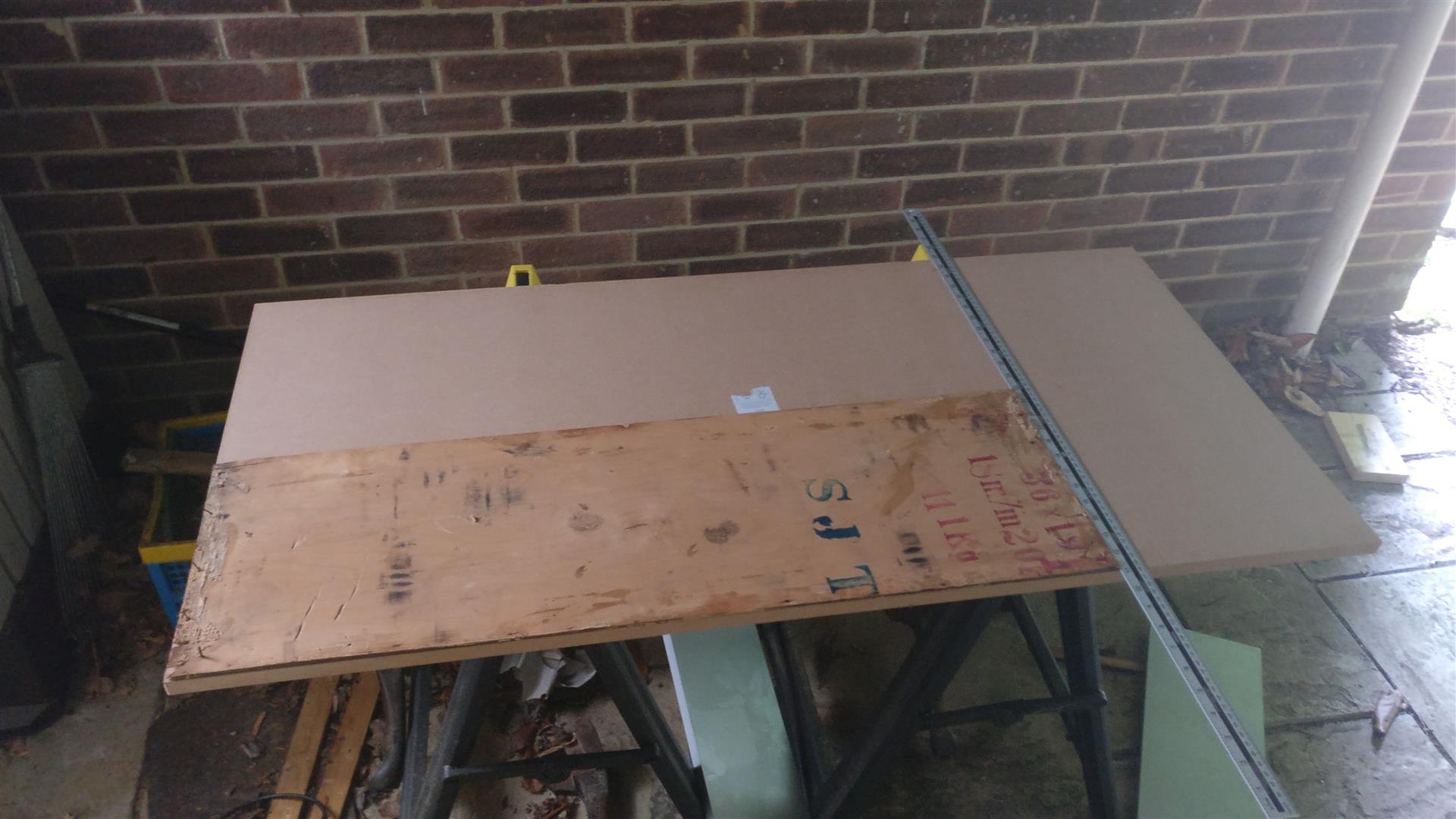 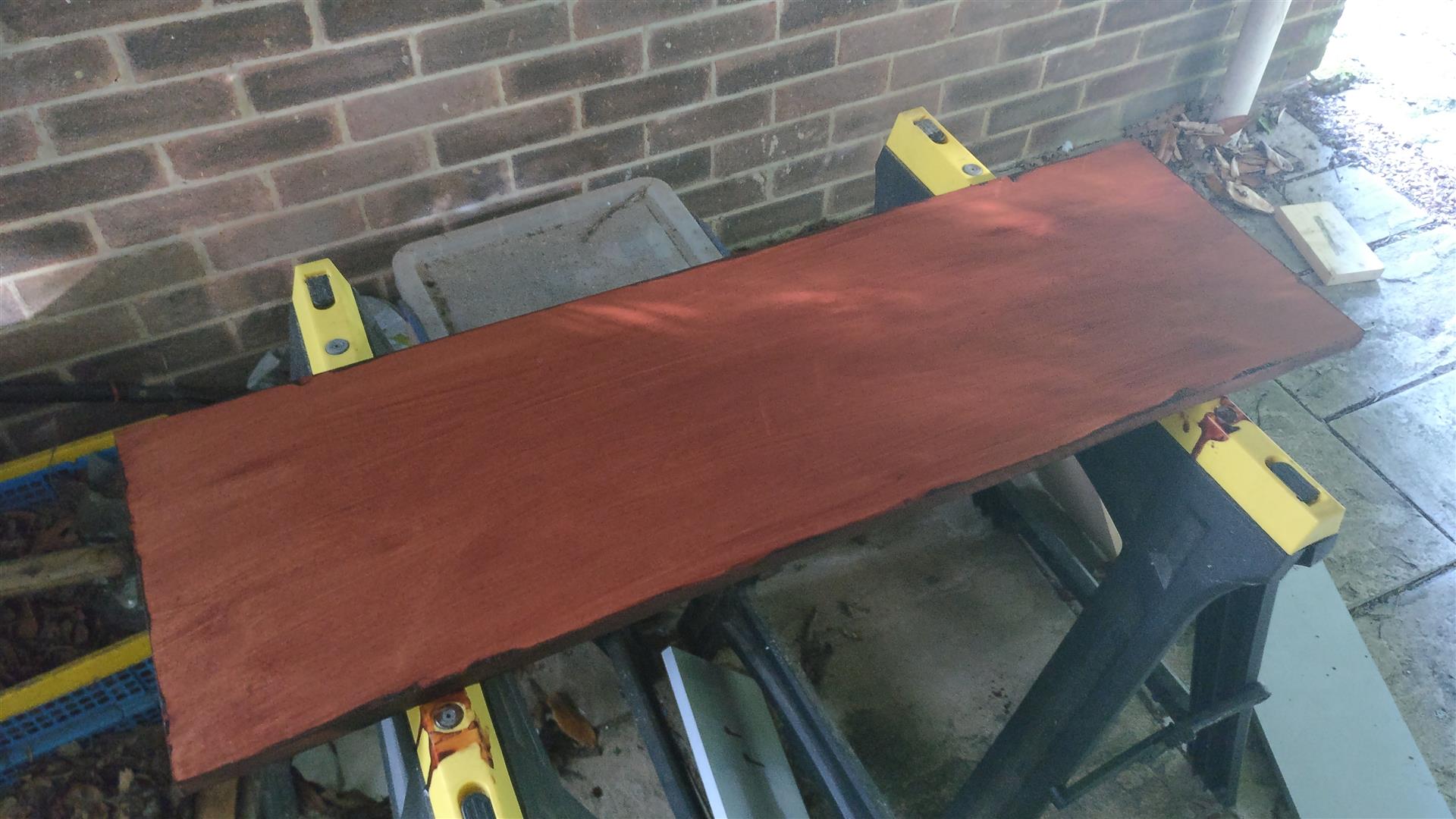 Don’t worry about the overspill of wood stain on the edges of the wood on this photo – I sanded that back and then applied another layer. 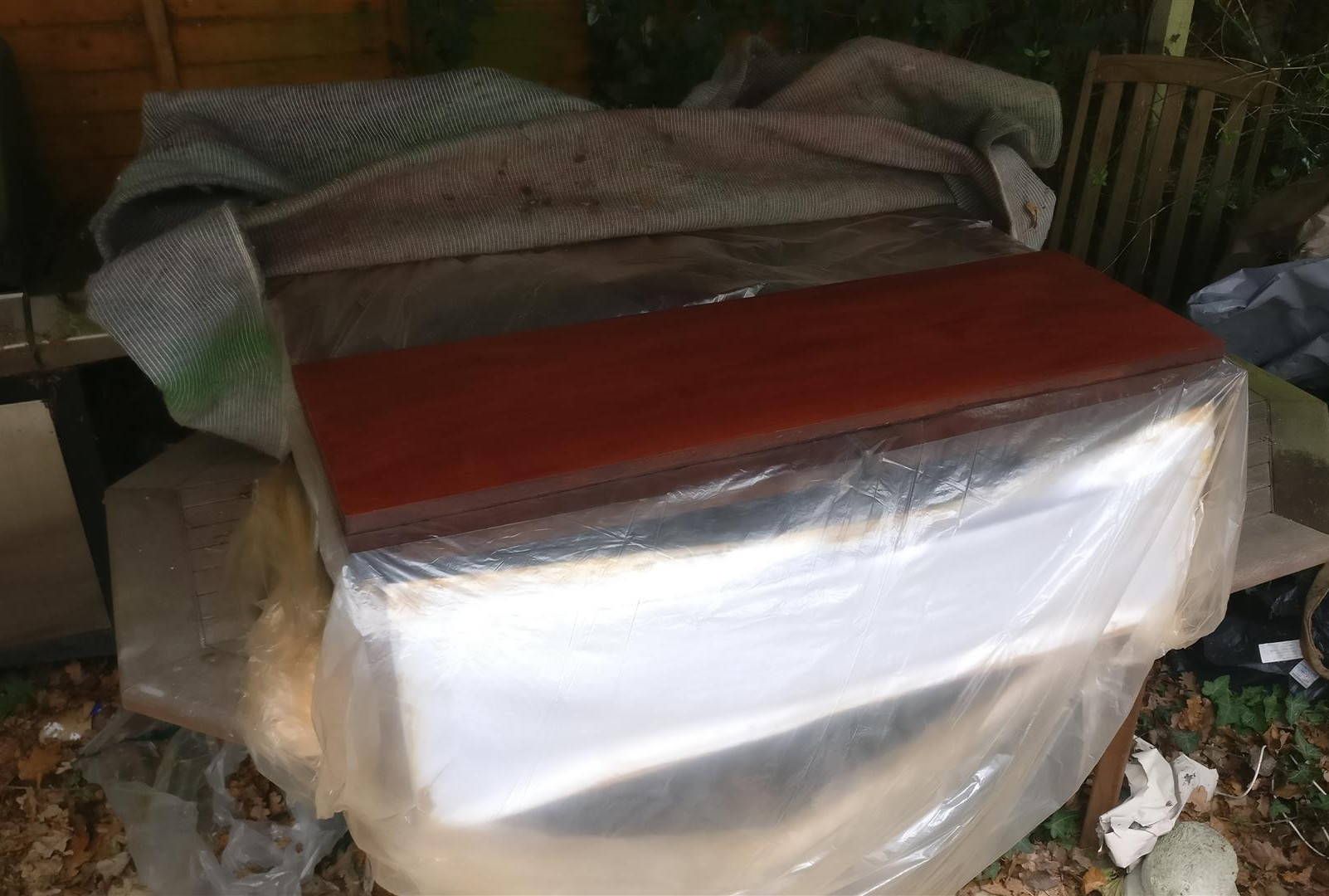 That’s as far as I have got so far. I intend to use dowel joints to attach the front edge bar to the MDF, and will glue & screw the legs to the MDF base. Once that is dry, I then plan to glue, screw, and dowel the base to the cabinet itself. I’ll also need to use some contact adhesive to re-attach the silk lining to the base.

Bear in mind that I have never done anything like this before, so I might be going about it all the wrong way and a solid base might be the wrong approach. We shall see!

Today I went to the huge twice-monthly Antiques and Collectables fair at Kempton Park Racecourse at Sunbury-on-Thames.

Unfortunately, despite walking around for over 4 hours and walking 5+ miles (according to my FitBit Alta), I didn’t find anything I wanted to buy apart from a tall galvanised bucket to use as an umbrella stand which was a reasonable £10.

However, once back in the car I asked google to find me nearby antiques shops, and it came up trumps with the Ashford Antiques Centre at Ashford in Middlesex, which was kind of on the way home and which I duly drove to.

Within moments of walking into this Aladdin’s Cave I saw a wooden display cabinet in an Art Nouveau style which I fell in love with, and even better it was a very reasonably priced £30. 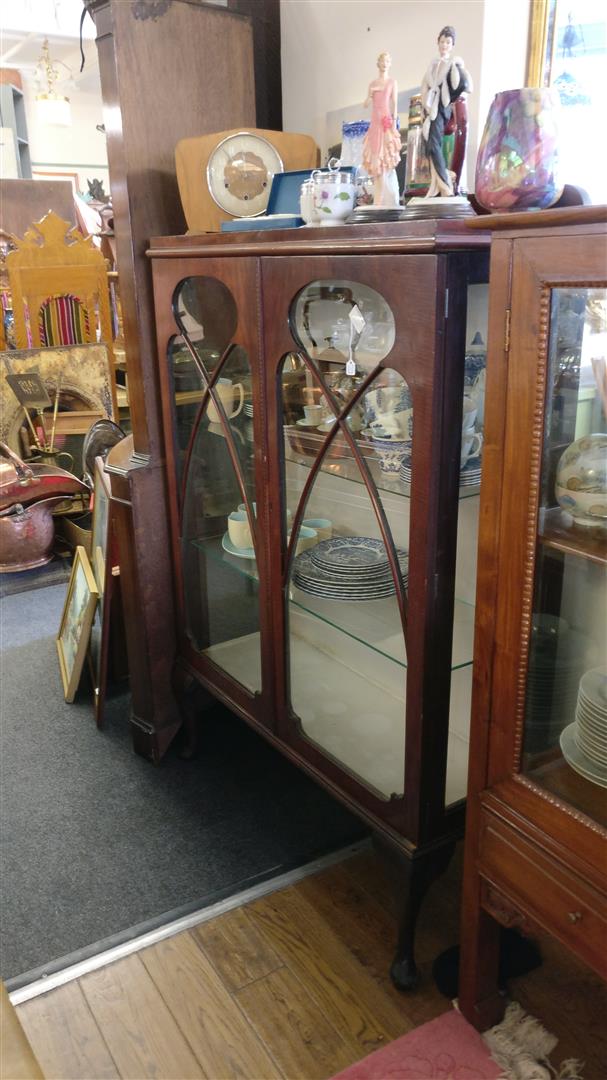 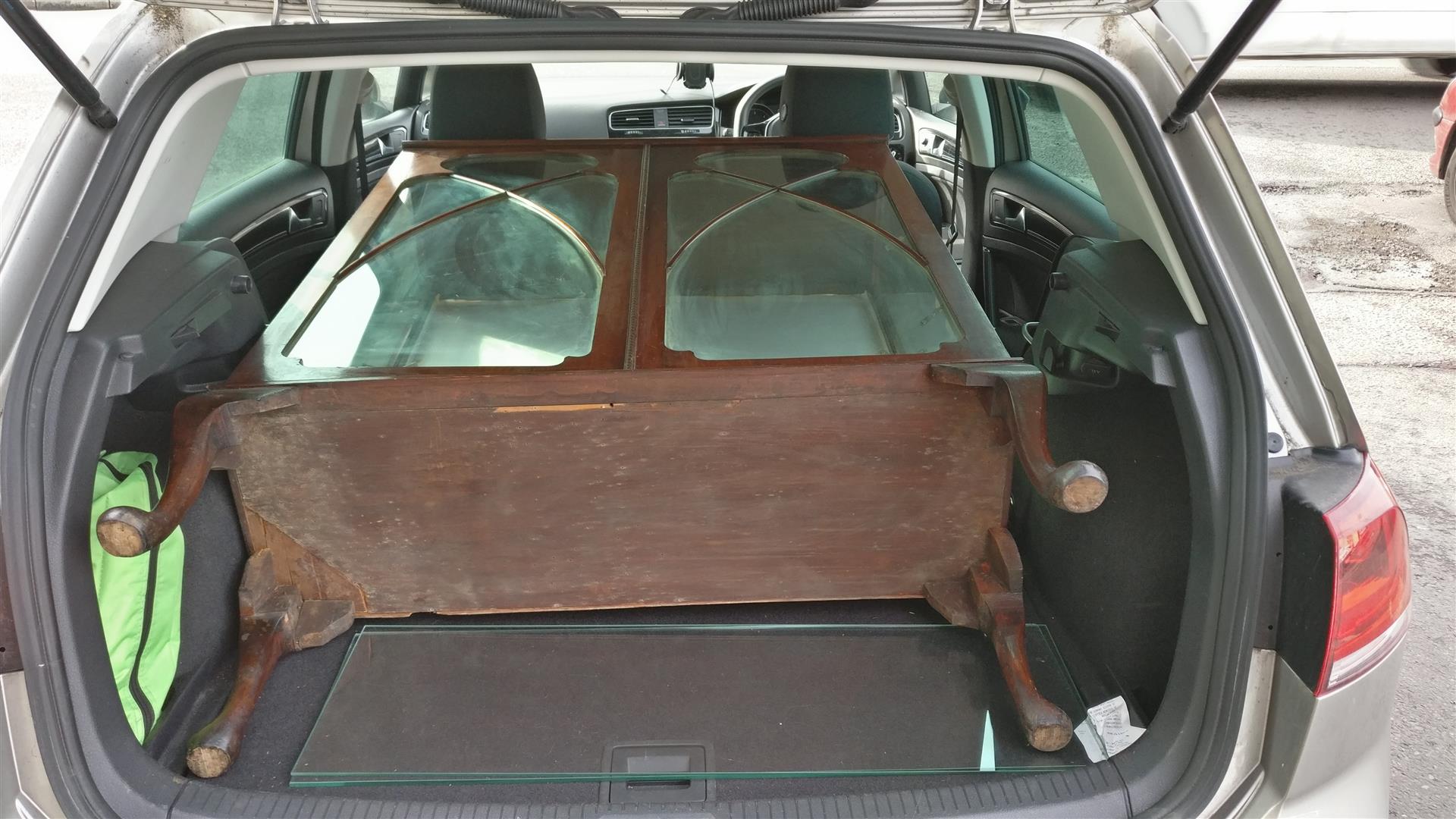 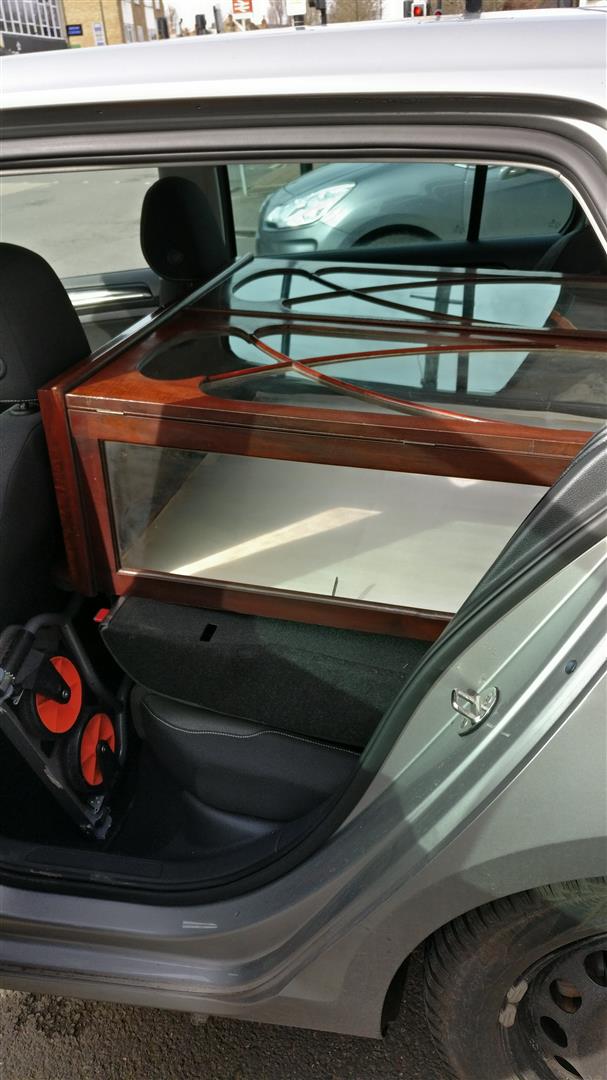 However, it was only when it was in the car that I could see the underside, and it is riddled with woodworm. And upon tapping the bottom, a load of frass (sawdust-like substance) fell out. 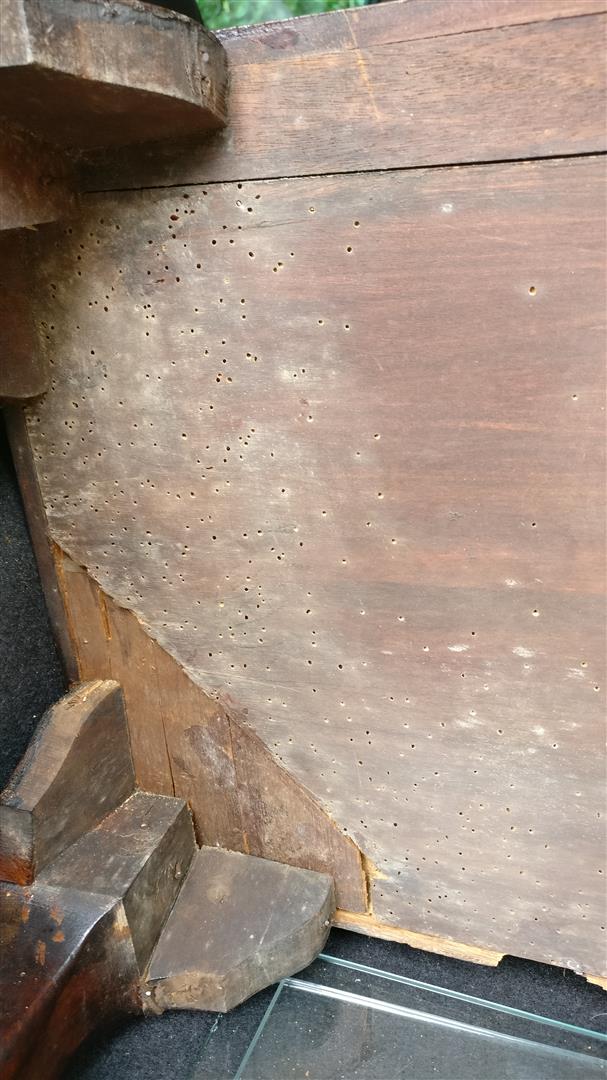 I’m unsure whether this is old woodworm or active woodworm, which makes me rather nervous about taking this item of furniture into the house. I think what I am going to have to do is prise off the bottom layer of plywood to assess the extent of the woodworm, treat it, and then make a new plywood base for it.

Also, the lock is missing its key and will need to be replaced.

Suddenly my £30 bargain has become a project.

Well, it looks like I’ve bought a pup. I got it out of the car and it’s so rotten that it’s falling apart and one of the legs is almost falling off. *sighs* 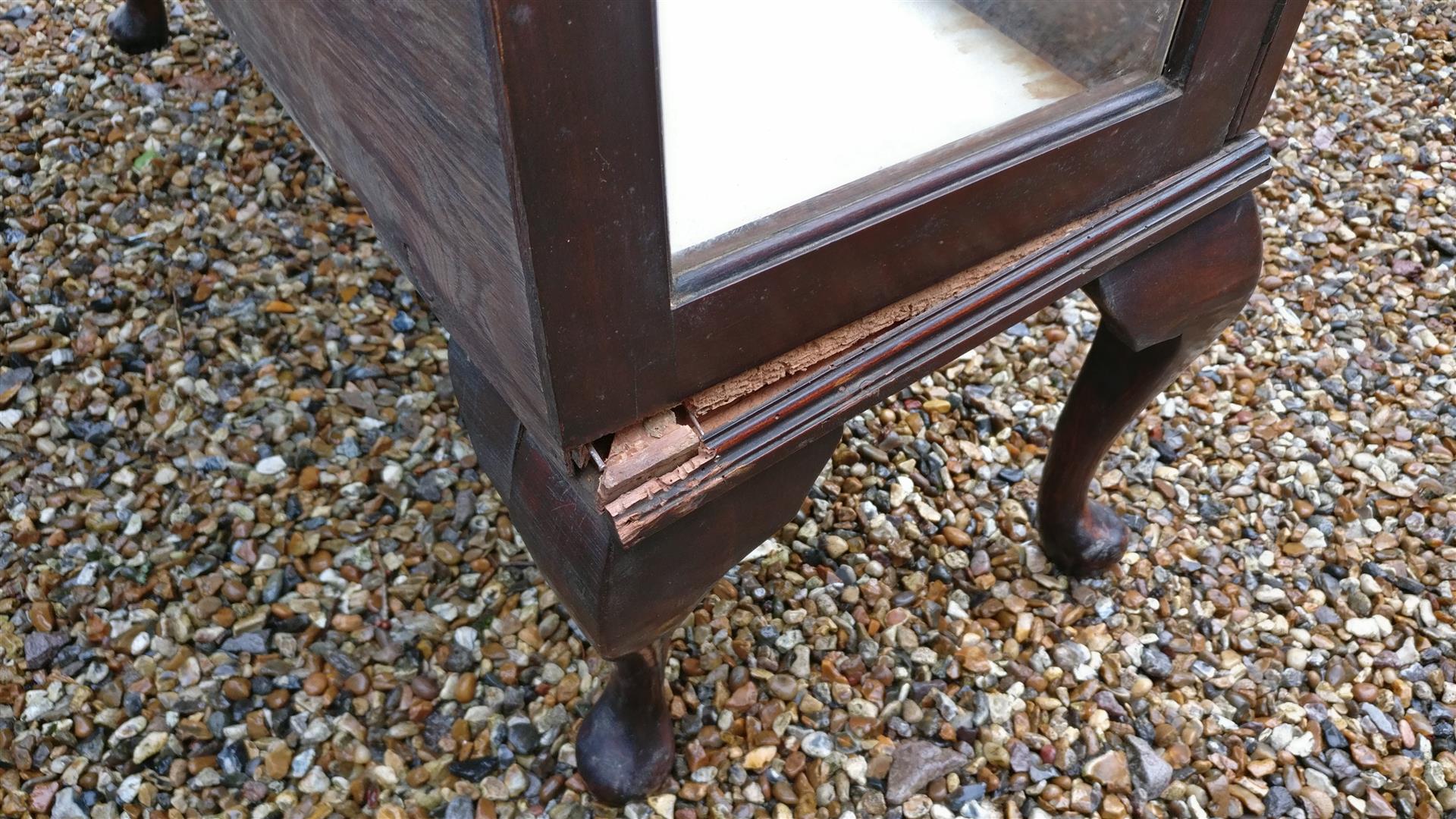 Click here for a 6 second video of me wiggling the leg.