I had my third session of laser on Saturday. I decided to grit my teeth and go for the 15mm rather than the 12mm we had to drop to last time. Initially it was very painful but then I sort of got ‘dialled in’ to the pain and it became a lot more bearable. It was still excruciatingly painful at times though, especially on the chest and tummy. For the face she dropped to a 12mm but that is usual. That too was very painful but fortunately over pretty quickly. So basically I managed to have a session on the settings she would normally use, rather than the milder ones we had to go down to last time due to the pain levels. So I feel sort of proud of myself on that.

I still haven’t worked out what the 15mm and 12mm refers to. From research on the web, it looks like it is the spot size. Yet Cynosure’s own website states that the 15mm spot size has a lower fluence (energy delivered per unit area) than the 12mm, which confuses me as the therapist says the 15mm is ‘more intense’ than the 12mm. If someone could explain this to me I’d be grateful. 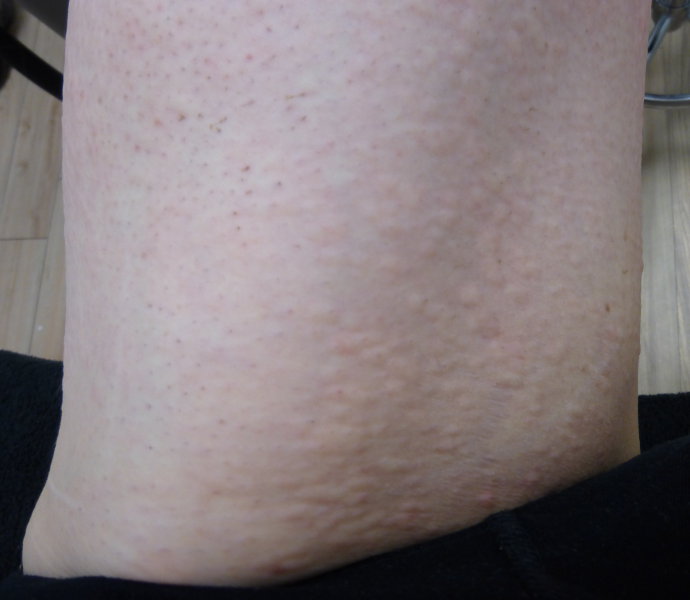 One side effect of the 15mm is that your hair follicles all swell up, making you look like you have some terrible skin complaint. Fortunately it calms down after an hour or so, although I’m still very red and blotchy in places almost 48 hours on, especially on my chest and tummy. My face is also quite sore-looking and stubbly. If you’re thinking of having laser done and you have a Y chromosome then be aware that, for me at least, it is almost impossible to get a smooth shave for a few days after no matter how close you shave. It’s just something I’m learning to live with. From experience I know I will be smooth again by a week later which is fine as I go to work in the week ‘in disguise’ (so to speak).

Talking of next week, I have my next Voice Therapy lesson next Saturday in London. I’m really looking forward to it. I’ve been practising as best I can since my first lesson and it will be interesting to see how I have got on. I hope my cold has cleared up by then though, because right now I am able to do a quite passable impression of the old Carlsberg adverts. LOL.

Then the weekend after that I have friends over for the weekend. So it looks like I have a busy schedule for once. Yay!