She’s the man – getting ‘read’ in public.

It’s been said[1] that trying to ‘pass’ as other than your birth gender is like playing a game where the moment someone becomes aware that you are succeeding, then you have just failed.

On Saturday I played just such a game, as I do every time I go out in public in girl mode.

I don’t know about anyone else, but I always feel like there is a fine line to be walked when going out shopping in girl mode. If you dress up too much then you will stick out like a sore thumb as many women don’t bother when just going shopping. Some appear to make no effort whatsoever, in fact. But at the other end of the extreme, if you emulate them and also dress down then you won’t have a hope of passing. You often have to over-feminise to compensate, which means paying particular attention to your makeup and wardrobe.

On Saturday, I didn’t heed my own advice and went out in jeans, unisex Merrell sandals, and a top. On reflection, although very comfortable, the sandals were a bad idea. I find that wearing a heel encourages me, and constantly reminds me, to walk in a feminine way. Flat shoes do not and you often forget. I also have bad posture in guy mode, and again heels encourage me into better posture as they affect the way you stand as well as the way you walk – in short, it’s much harder to slouch when you’re in heels. 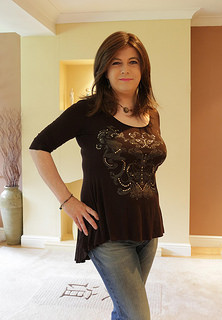 Anyway, that all said, into Camberley I went like this.

I parked up in the multi-storey car park and even in my little super-mini class car, I found the parking bay very tight indeed. I had to reposition several times so as to leave enough space for the driver of the car next to me to get in, whilst leaving enough space on my side to get out. It was very tight indeed. (There is a reason for me telling you this and I will come back to it later).

I was primarily shopping for a short sleeve office or school uniform type white blouse for an upcoming photo shoot. After trying BHS, Primark, several charity shops, and (earlier in the week) M&S, I found what I wanted in New Look. And best of all it was in the sale, reduced from £12.99 to £7. Bargain. 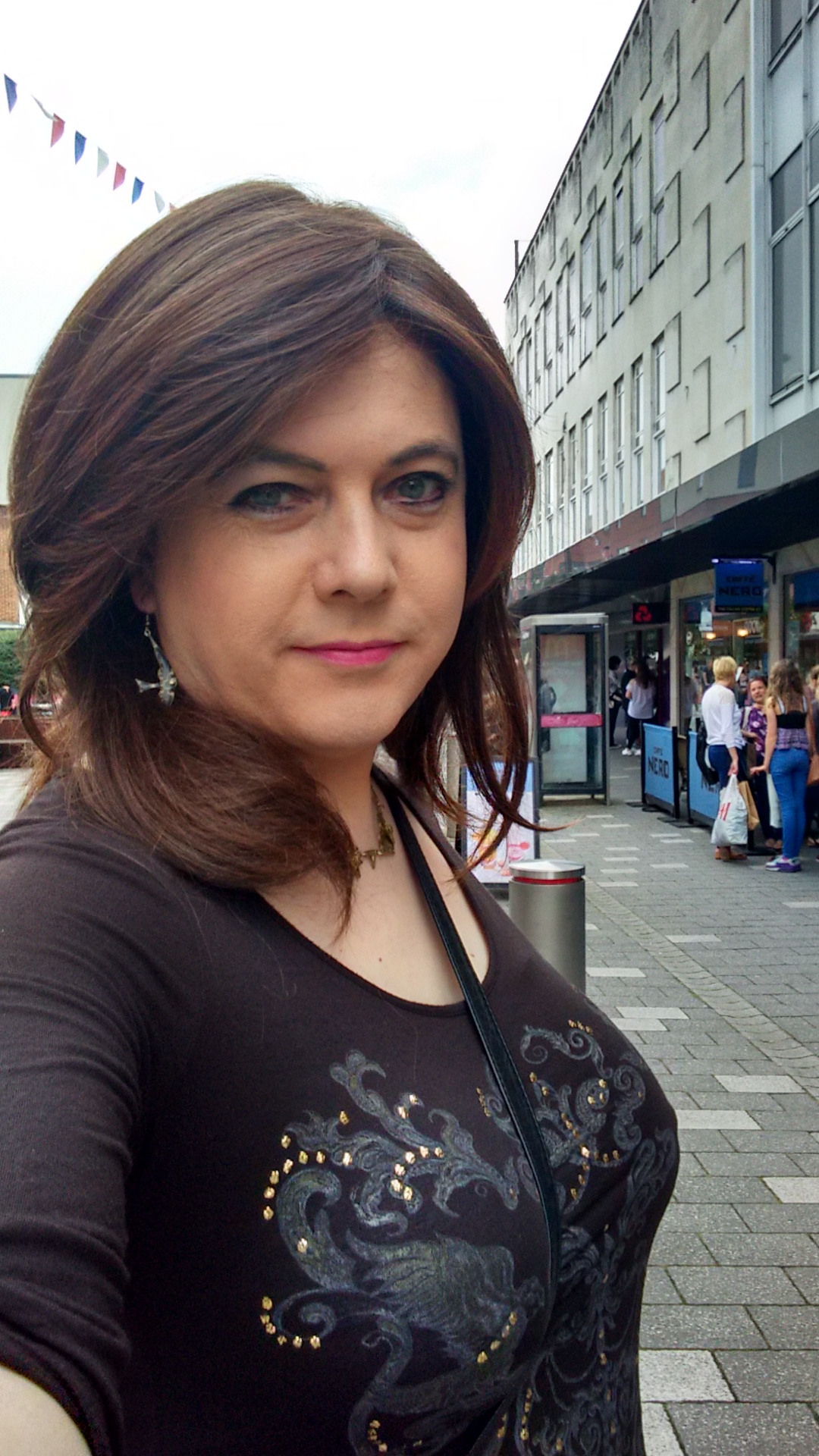 Things had been going well, and nobody had given me so much as a second glance (which is what usually happens) apart from one point where an older man accidentally bumped into me and said “oh, I’m so sorry my dear”. However, all that was about to change as I headed back to the car to leave.

I joined the queue to pay for my parking at the pay station. In front of me was a lady and her friend, and the lady was having trouble with the machine. On these ones there is no ticket – you have to type your car registration number in, and the lady had several failed attempts and her friend explained to everyone that it was a new car and her friend couldn’t remember the number. Or, rather, she thought she could but evidently couldn’t.

The lady started rummaged in her handbag saying she had it written down, but then half turned and said “Oh, I’ll let this gentleman… lady… go first”.

I had hoped that I was doing an ok job of passing but clearly not. But it was said without rancour or making a big deal about it. It was all very matter-of-fact, and that’s probably the best way to handle a situation like this, I think. I know some people might have apologised or something, which would have ironically drawn far more attention to it and made things worse. So credit to her for this.

After I had paid and returned to the car, I was faced with the owner of the car parked next to mine, on the driver’s side. He had a small boy who was trying to let himself into the passenger side, and I just stood and watched, sure that I was about to witness a massive car park ding happen to my car. The father must have had the same idea and said to the boy “Wait. Let the man into… um… their car first”. The little boy, in keeping with a lot of kids that age adopted an “I can do it” stubborn determination and, to his credit, did get in without dinging my car. Amazingly.

So, again, it was just a little slip up and no big deal was made of it. Although it was also clear that I had failed to pass again. In fairness, the car park was dimly lit so it’s possible that the bloke didn’t notice my female top, makeup and, indeed, tits. After all, some blokes do wear their hair long. And he did have other things to think about – like the owner of a car his son showed every likelihood of damaging standing right there watching.

It has, however, made me ponder as to what are the key indicators to gender that these people were picking up on? In neither case was it my voice as I hadn’t spoken. It wasn’t necessarily height as although 5’8″ is reasonably tall for a woman, it’s not excessively so. It might be build. Or could have been the way I was standing – as I mentioned previously, flat shoes don’t encourage me to pay attention to my posture.

In both cases, the person didn’t make a big deal of it and for that I should be grateful. Although it would have been even nicer if they hadn’t noticed at all.

Posted by Hay Llamas on 2nd September 2015 in Diary, Out & About, Transgender

On Saturday I went up to London again for another Voice Coaching session, only this time it was a group session rather than one-to-one.

I was due to meet a friend for lunch beforehand. I had a rotten journey up and was pretty late, and then we found everywhere very busy for food. We got seated at a restaurant but after 10 mins of not even having our drink order taken, and with me already fast running out of time, we decided to bail and go to a nice coffee shop that she knew, and even they had slow service. To cut a boring story shorter, pretty much everything conspired to make me late – the service, walking to the wrong tube station as we hadn’t realised there was another one on the same line that was nearer, tube train delays, and everything. But it worked out ok in the end as I arrived merely 10 mins late and they hadn’t started yet.

The 2 hour session went very well and I was very encouraged by my progress. We had a few giggles, not least a game of “My gran went to the market and she bought…” that got up to 12 items. My contributions were “a banana” and “two pairs of wellies for her pet Llama” which raised a bit of a laugh.
There were 6 of us (plus the coach), so for part of the time we broke into pairs for conversation training. One pair managed to get into an argument about cables, of all things, and thereafter every time someone made reference to that it set them off again. So we didn’t do that. Much.

I think I’ll definitely go back and do the next group session next month. Not only did I find it useful, and also encouraging, but the social aspect of it was nice too.

It’s said that even the longest journey begins with just a single step. Well, in my case, this one begins with a Patch Test.

I have decided to embark on a programme of Laser Hair Removal, with a view to ultimately having a hairless face and body. I’m fed up with having to do so much shaving and depilation before I can go out in girl mode, and feel like Cinderella with the clock approaching midnight when it comes to facial hair (sorry to break the Suspension of Disbelief by mentioning that). I should also be able to wear a less heavy foundation when all the facial hair is gone, which should be good.

So today I visited a ProSkin clinic and had a Patch Test with their Cynosure Elite Laser Hair removal machine. The girl who did it was really nice and seemed very knowledgeable, and did test treatments on my leg, arm, chest and face. I have to be honest and say it really stung, especially on the chest where my hair is quite coarse, but I think I can bear it. And the rewards will be worth it, I hope!

So this is all very exciting!

Meanwhile, I’m back to Salsa classes on Monday. Woot!