I’ve been keeping an eye on eBay for more fountain pens recently, and picked up a few bargains (to a greater or lesser extent).

END_OF_DOCUMENT_TOKEN_TO_BE_REPLACED

I visited my parents recently, and had a bit of a pen-fest.

First off, my dad gave me his old Sheaffer pen. Some might see this as worn out and beaten up, but to me it is gorgeous wear and patination, and I love it. There is a matching rollerball, which he also gave to me.

I’ve always loved the design of the inlaid nib Sheaffer pens, so this was really big deal for me to own one. He thinks he first started using it in the late 1950’s, but I think he is mistaken. Looking online, this is without a doubt a “Targa by Sheaffer” which was first introduced in 1976. After some research on sheaffertarga.com I have narrowed it down to the Matte Black GT 1st Edition Classic (model number 1003) which was produced from 1980-1988. I believe it to be a 1st Edition as the cap end is the same colour as the cap and body, whereas the 2nd Edition has a gold cap end.

But regardless of its age and provenance, it is a lovely pen and I love it to bits. The wear and patina make it very special, and the brass showing through lends it a slightly Steampunk vibe.

Having inked it up, it writes absolutely beautifully. It’s a cartridge pen with converter, so I filled it with Parker Quink Permanent Black bottled ink.

He also gave me another Sheaffer, but doesn’t know where it came from or whose it was. Having done my research online, I have narrowed it down to being a Sheaffer Connaisseur Black 2nd Edition (model number 810), being the 2nd Edition because it has Sheaffer stamped on the cap band rather than the clip. This pen was produced from 1989 to 1996, and has an 18k gold oblique nib. It writes well, although runs a little wet. Next is a nondescript green Parker 45 which was my grandmother’s, and whose only notable feature is the fact that the system has been worn into an odd shape presumably from years of writing. My mum said I could have it. What I couldn’t have was my grandmother’s other pen which is a Parker 51 in deep blue, missing its clip and cap end, and whose nib is bent right over to the left like a banana through years of use. It writes really beautifully, and my mum writes with it regularly which is why I can’t have it. 🙂

Another pen they gave (back to) me was an old Osmiroid which I had as a kid and which I had forgotten that I had even owned. It’s pretty unremarkable. There was also a very cheap Parker which had corporate branding on it which was obviously a freebie, and a couple of nondescript unnamed fountain pens that were similarly freebies, and I left those.

Finally, my dad also let me have a look at (and take a picture of) his Mont Blanc pen set. What immediately struck me about it is how heavily its design has influenced the Jinhao X450, and to some extent the X750. Naturally I can’t have his Mont Blanc just yet as he still uses it. But I am sure that one day it will be added to my collection (although obviously I hope that day is a long way off).

So there we go – a nice little collection.

I think I might have to buy a pen case at this rate. 🙂

I’ve been getting back into fountain pens in a big way lately.

Well, that’s not entirely true – I have never really stopped using them. When working on client sites, I tend to keep a hand written day log and enjoy using a Parker 45 fountain pen to write it. It gives me a small amount of pleasure to do so.

I have two examples of the Parker 45 Flighter – one from the late 1980’s which was a present from my parents, and has a matching retractable ballpoint. The other is an almost identical Parker 45 Flighter which bought in the mid-2000’s a little before Parker ceased production of the 45 in 2008. I bought it because I had mislaid the original Parker 45, although fortunately I have now found it again.

The 1980’s pair are unfortunately engraved with a name I no longer use, which is a shame. 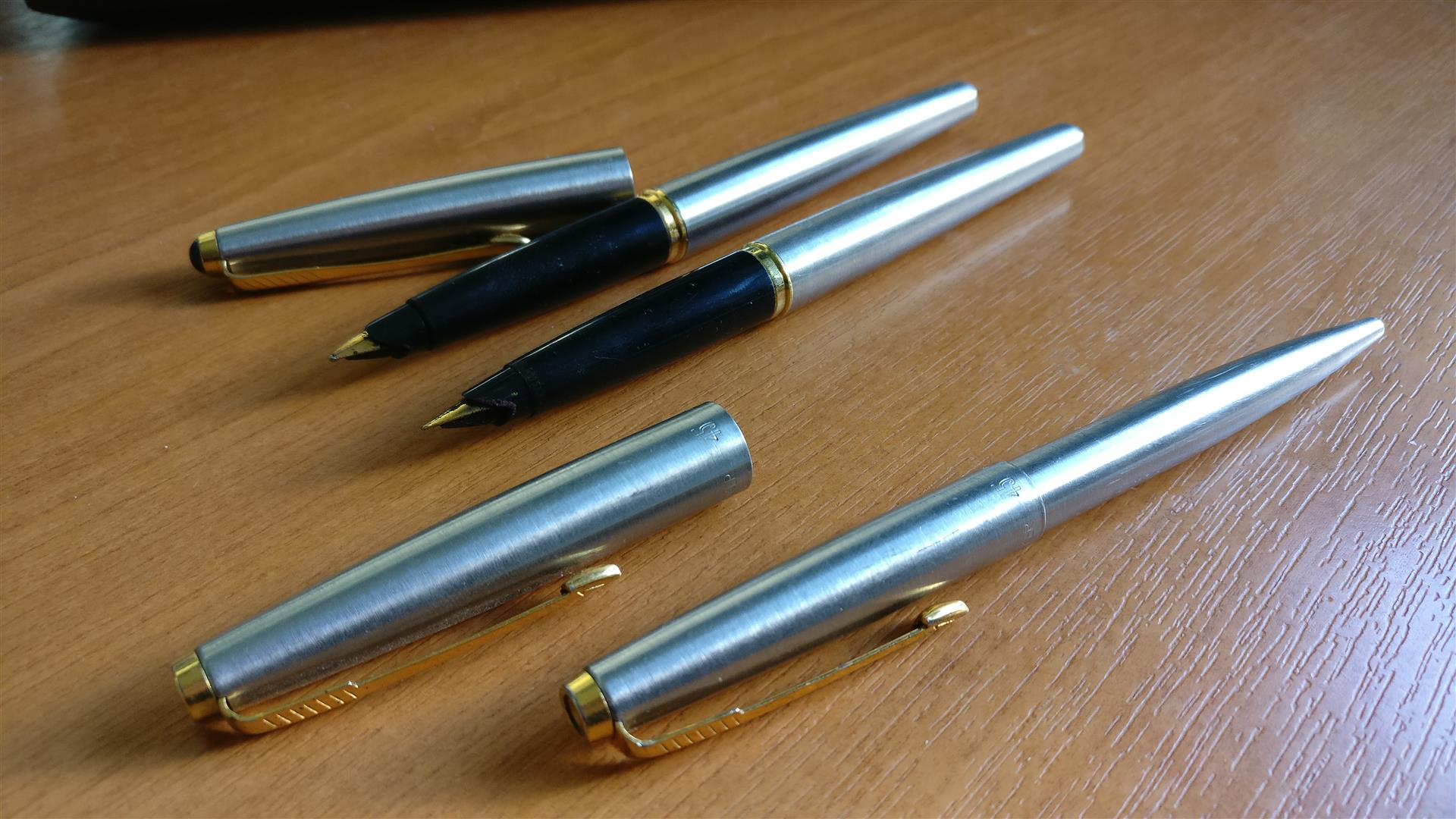 There are some interesting differences between the two, which you can see on the Parker 45 Flighter Timeline on Pen Collect. The earlier pens have a dimpled cap end, whilst the later pen has a small dome or jewel. 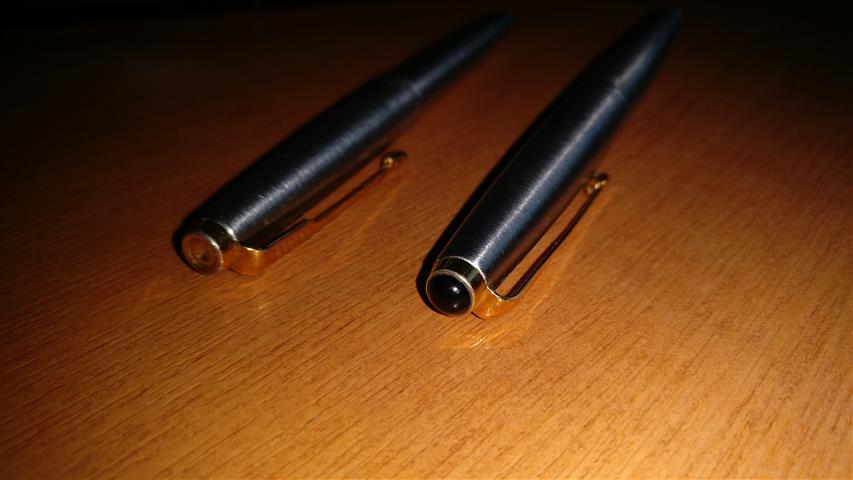 Recently I have been inspired by a thread on an internet forum to look into additional pens. There are some really good quality pens coming over from China now from Jinhao and Hero, which can be bought for as little as £2 or less, including postage, if you are prepared to buy from China on eBay and wait 2-3 weeks for them to arrive. I am also seeing vintage pens for sale in the various Antiques and Collectors fairs that I go to (which I am still going to as much as ever, but don’t really blog about it so much as it is probably getting a little boring for people).

Before that, though, I went looking for another pen which I had, which I had used at school in the mid 1970’s because back in those day you were expected to use a fountain pen. I never really liked this one as it was scratchy, and haven’t written with it in decades. It turns out it is a Parker 25. A little research on Pen Collect and More Engineering suggests it is a Mark III, since it has no nib breather hole, has a dimpled end, and is stamped “Made in England” on the cap. That implies it dates from 1979 onwards, but this confuses me as I’m almost certain I was using it at school in 1977. I changed schools in 1978 and I am sure I was using that pen at the school before rather than after. 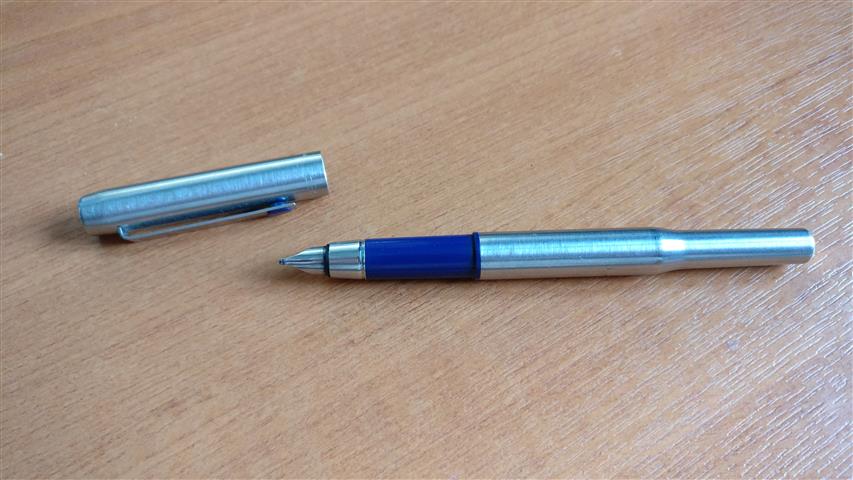 Looking at the nib with a loupe, it looks like it is damaged, with a downward bend and too much of a gap between the tines (the two halves of the nib). However, amazingly, when inked it writes just fine. However, I don’t have a lot of love for this pen and I doubt I will be using it regularly. It has no resale value as, sadly, it is also engraved with my name.

Those were all of the fountain pens in my possession at the time. In subsequent posts I will mention acquisitions I have made since.

I have since learned how to read the date codes that some Parker pens have. In fact I hadn’t even noticed my pens had date codes!

The Parker 25 doesn’t have a date code.

You can read more about dating a Parker pen here.