Somewhat surprisingly, people actually read my blog (I know – it came as a surprise to me too) and people have been asking me what I’ve been up to, and how the job is going. 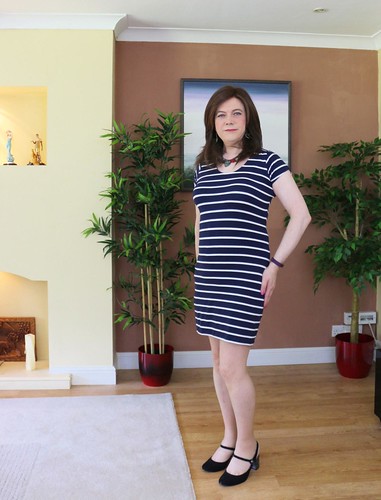 As I mentioned in my previous post, the job is predominantly based at my own home office, with most client interaction being via Skype (either voice-only conference call, or IM) and email. Up until last Friday, I hadn’t actually had any further in-person meetings, but on Friday we had a catch-up and progress meeting which I attended.

Based on previous meetings, I knew people dressed pretty casually so I chose a casual t-shirt dress by Atmosphere which had cost me the princely sum of £5 in Primark, plus the shoes and tights I mentioned buying from M&S in my previous post.

The meeting went very well, and people seemed happy with the progress I have made, my estimates for how much is to do on what I am doing, some design ideas I have, and also a roadmap for what I will work on next. It was all very encouraging.

As before, everyone was very accepting of my presented gender.

However, at one point I had the most bizarre thing happen – I’d just taken a sip of orange squash, put it down, and then a few moments later without any warning or feeling that it was about to happen, a really loud burp escaped from me. I could have died of embarrassment! I was absolutely mortified. I got teased a little bit in a good-natured (but not blokey banter) way, but was still so embarrassed. That really has never happened to me before – normally I can feel a burp coming and suppress it. What surprised me the most, though, was just how much more embarrassed I felt in girl mode about it than I might have in guy mode.

When I got home I did a small photo shoot for a schoolgirl outfit I have been working on for Flickr, but I’m not happy with any of the shots. 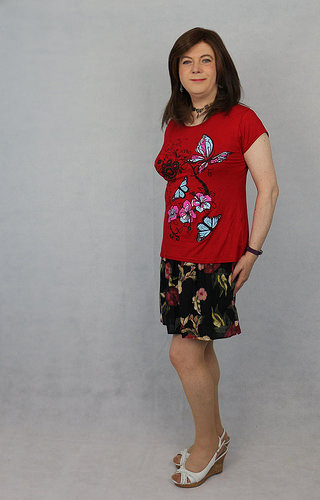 The next day – Saturday – it was the Monthly Market at Farnham Maltings, which I like to go to. I’ve mentioned it a few times in previous posts, and it’s an Antiques, Crafts and Collectables Fair. It’s a reasonable £1 to get in but the car park is not free and costs £1.20 for 1 hour and £1.40 for 2 hours (and more for longer obviously). I usually go for 2 hours as although I could whistle round in an hour, it’s not worth feeling rushed just for a saving of 20p.

I dressed casually in a nice butterfly top I recently got from eBay (in fact I like this one so much I now have 3 of them in different colours) and a skirt by Hollister. I wore flats in the end, rather than the wedges in the photo, as I knew my feet would get sore quickly in the wedges.

It was clear that a lot of sellers were on holiday, as the place felt very sparse compared with normal. I didn’t find much apart from a very cute silver pinky finger ring of two entwined open hearts, marked 925 silver, which the seller said was 1970’s. It wasn’t in the best of condition, but it fit me just right, and the seller wanted £10 for it. I decided that I already wear rings on both pinky fingers, so told him I’d leave it whereupon he said he’d take £8. I decided to walk away though.
I really regret doing that now. It occurs to me that I already have two rings that fit only my right ring finger, which I choose from as the mood takes me, and my pinky fingers should be no different. A missed opportunity there, because it was very cute. Never mind, maybe the seller will be there next month and still have it.

When I got home, I tried again on the schoolgirl outfit shoot, but still wasn’t happy with it.

The following Tuesday I got up super-early and made it over to the Sunbury Antiques Market at Kempton Park Racecourse, which you can read about on my public Facebook page. 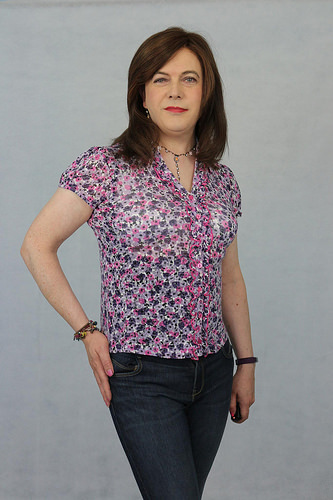 The rest of the week was spent working from home, then on Sunday I went up to Maidenhead for the Shabbytique and eatonthehighstreet fair. I wore a pretty top by Per Una, which was one of my many eBay / Charity Shop bargains, some jeans by Autograph (also a M&S brand), and a pair of boots by DUO. 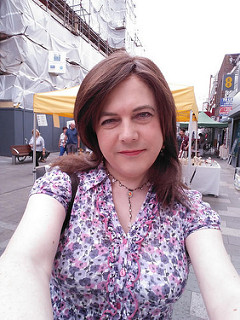 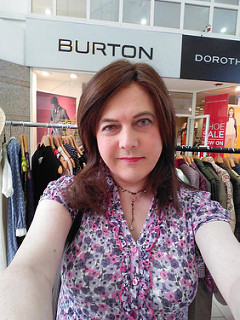 Steve Conway was singing, so it was really nice to catch up with him and his wife and was worth going just for that.

The fair itself was a little disappointing, with a mix of stalls selling crafts and the like, and an equal number of food stalls, all spread out over the length of the pedestrianised part of the High Street. It felt like slim pickings though.

However, I did manage to get the most adorable necklace from a lady who is retiring and selling her remaining stock off at half price. The necklace I bought was £10, reduced from £20, and features a Murano glass pendant with flecks of gold in it, and a Sterling silver chain. I thought it was beautiful.

After that I headed home. I didn’t feel like doing any further photo shoots and had a pretty quiet remainder to the day. 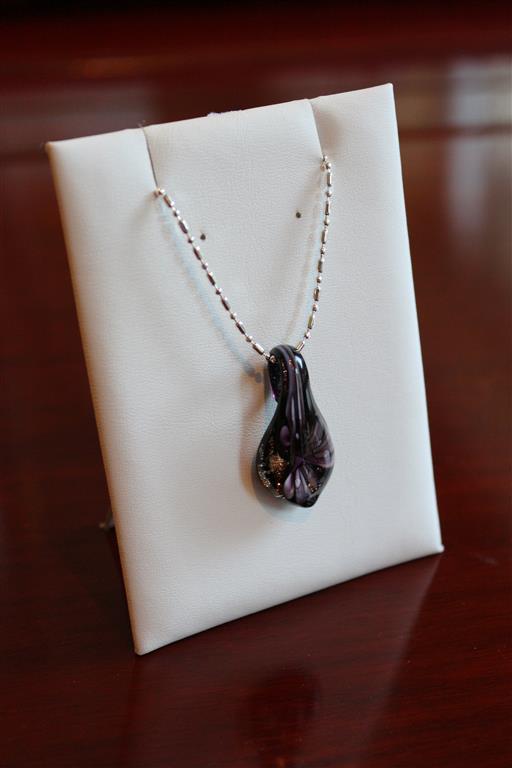 Posted by Hay Llamas on 17th August 2016 in Arts and Crafts, Clothes, Clothes, Shoes, and Jewellery, Diary, Out & About, Photos, Shopping, Social, Transgender