Girls who do Maltings

One of the things that my various social media accounts often results in is contact with other t-girls, and one such girl is Siobhan Hapgood who regularly comments on my Facebook posts and who has become a friend as a result.

We’ve been meaning to meet up for a while, and Siobhan suggested that since the Monthly Market at Farnham Maltings was coming up and, since as a regular reader she knows I often visit that, maybe we should meet up for July’s, which sounded like a great idea to me, and so a plan was formed.

We arranged to meet at 10am, so on Friday night I set my alarm for 8am which seemed like plenty of time to get ready.

You’re probably expecting a liturgy of mishaps and setbacks now, but I’m happy to report that I timed it perfectly and arrived with a couple of minutes to spare without a hitch, although as I hit traffic near Farnham I was worrying a little if I would be a few minutes late. I hate being late.

Siobhan had arrived literally minutes before me, and parked not far from me. She recognised me from my Flickr pics as I got out of the car, and came over to me.

We both paid for 5 hours parking for our cars, as that was roughly the amount of time she had before she had to leave again, and then headed into the market, having a quick loo break before browsing the various stalls.

Naturally, we wanted some pics, so tried a joint selfe at which point a passing lady asked if we would like her to take the pic for us, which was very nice of her. Unfortunately they didn’t turn out very well though.

We carried on round a bit further and I noted that the fair was smaller this month with the backstage area and back rooms both closed off and unused. I think it must be because many sellers are on holiday – I know that some of the smaller fairs don’t even have events for July or August. 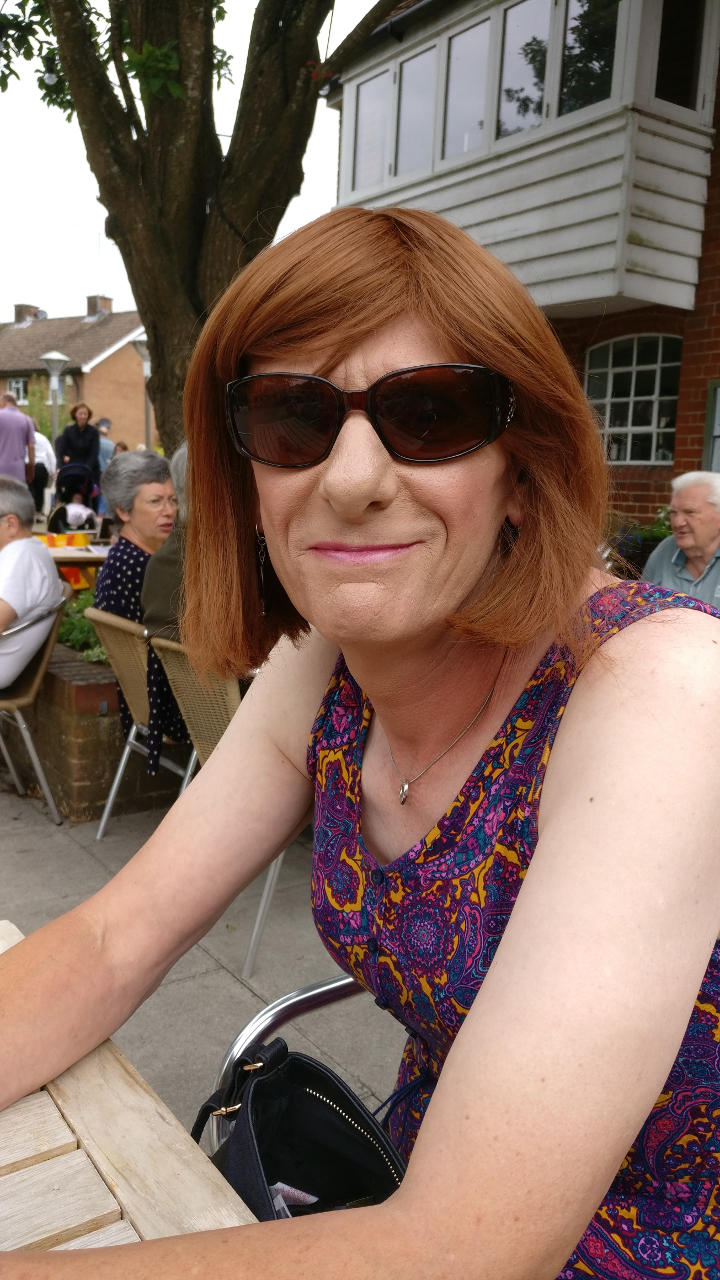 After we’d thoroughly perused the Great Hall, the Courtyard, and the basement, chatting as we did, we decided it was time a cup of coffee and a sit down, so joined the queue in the small cafe. After what seemed like ages we got our coffee and decided to sit outside, at which point I took some pics of Siobhan – one of which she liked so much she made it her Facebook profile pic. Yay me!

We nattered for ages, and then finally decided we should carry on looking round the fair, and since we were outside we may as well do the outside stalls.

I immediately spotted a really nice Mixed Media canvas of Marilyn Monroe that I liked the look of. It looked like the artist had got the photos of Marilyn Monroe professionally printed to canvas, and then had painted round them using acrylic or oil paint, plus corrugated card. It had a pleasing 3D textured feel to it.

The seller wanted £28 and I asked him if that was his best price, and he suggested £25. I thought this was fair, so I didn’t haggle further and bought it, and then put it straight in the car. 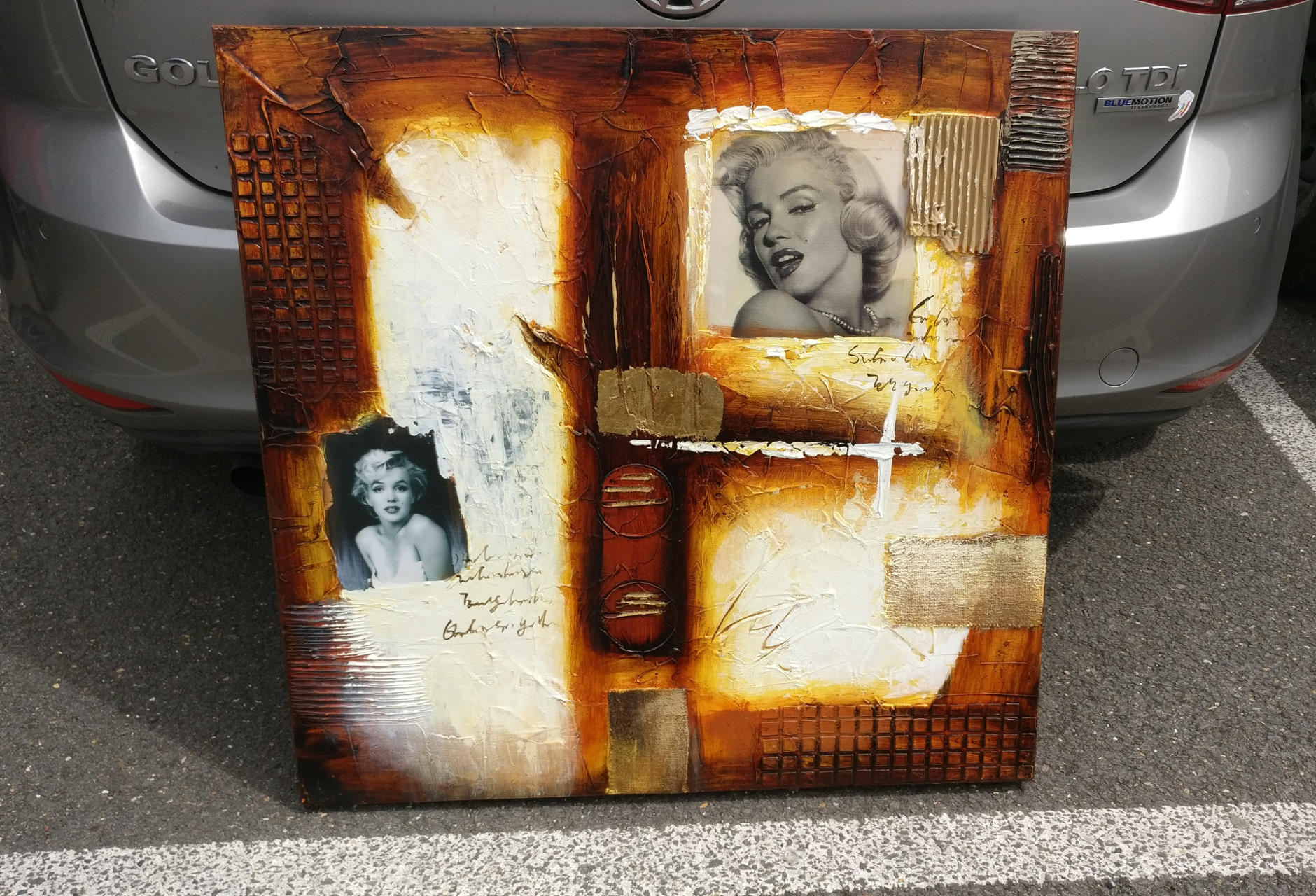 We then headed back inside to do the various upstairs rooms. 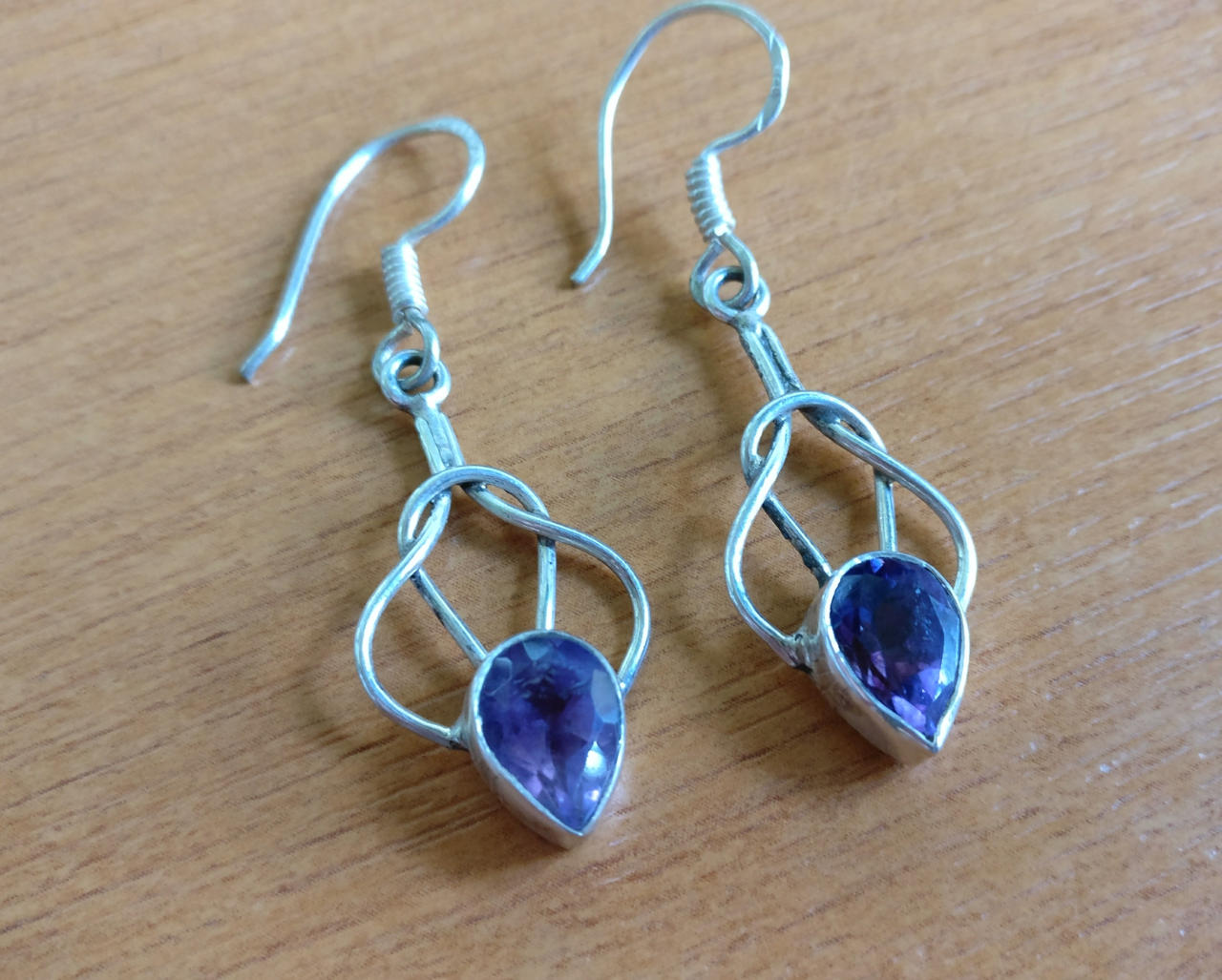 In one of the rooms, which was mostly devoted to craft, I spotted a gorgeous pair of silver earrings. The seller was asking £12 for them, and I asked if a £10 note would buy them, and she accepted.

We also found a seller who had some lovely delicate small silver rings for £2 or £3, depending on size, and ended up buying one each.

I also spotted a top that I thought would look great on Siobhan, and whilst she agreed that it would, she decided to pass on it. 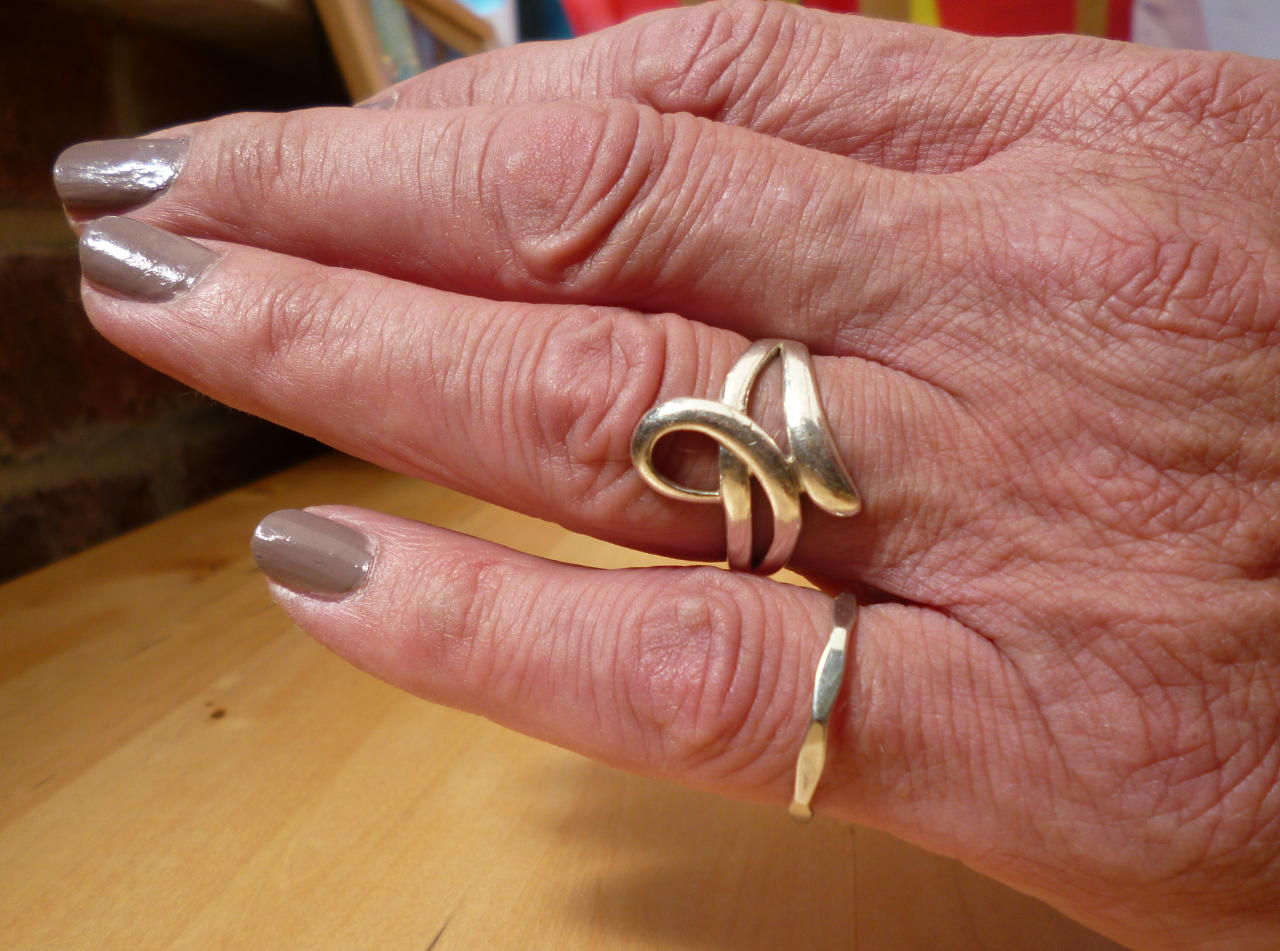 In another room, with yet more craft and jewellery, I spotted a really lovely silver Celtic / Art Nouveau ring which I showed to Siobhan, partly because I was in two minds whether or not to buy it. But she took it to mean I was suggesting it for her, and she rather fell in love with it and after a little umming and ahhing, decided to buy it. But I was fine with that, not only because I was really happy that she had found something she really liked, but also because during one of the umms or ahhs, I tried it on myself and found it ever so slightly loose on me. Which in many ways was a bit of a relief. 🙂

Carrying on round that room, I got talking to a stallholder I had bought from in the past, and spotted an absolutely gorgeous pair of earrings. Unfortunately, they were being worn by her. They were a dream catcher design made from two small silver hoops perpendicular to each other forming a small globe, with silver wire web with a small seed stone in the centre, and with a single metal feather hanging below. She was also wearing a matching necklace. She told me they were Native American silver which she imported from a tribe in America. She didn’t have another pair, but would next be at The Matings for the October fair and would see if she could source another pair by then for me. I must admit I almost very cheekily asked if she would sell me the set she was wearing, but I thought perhaps that might be a little rude so decided not to. Besides, I had already spent £38 by now (not including the parking, entry, and the coffee) and I’d gone in intending not to buy anything, so it was probably just as well. 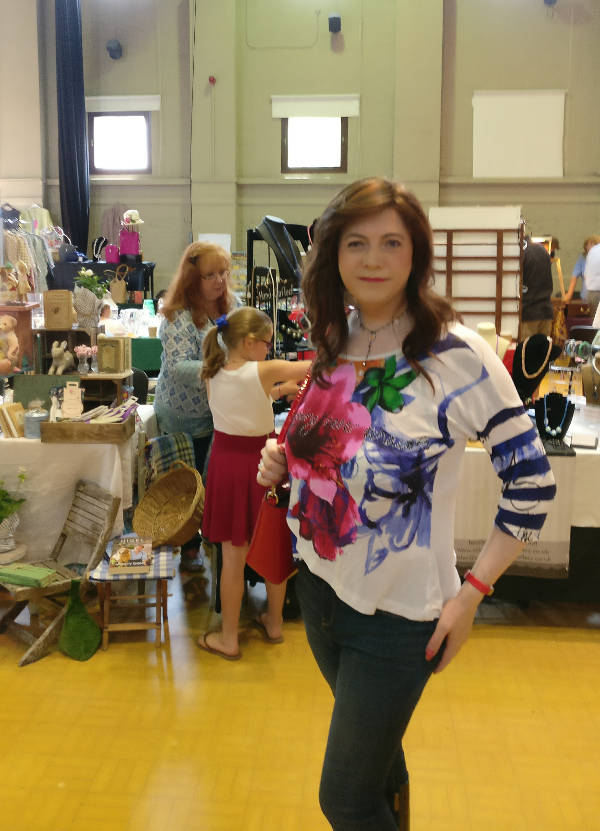 We headed back downstairs, and found ourselves back in the Great Hall, and I asked Siobhan if she’d take a pic of me. It came out really well and I’m very pleased with it. 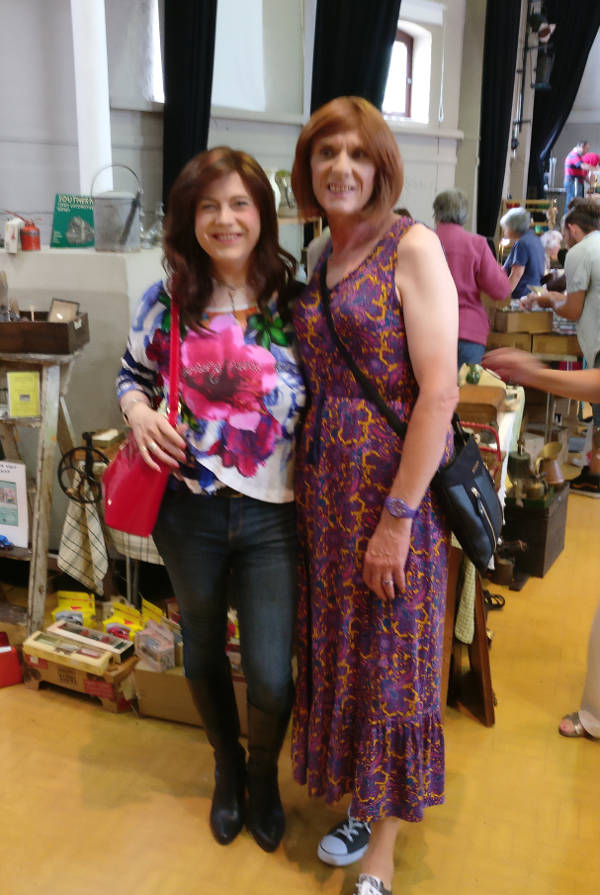 We then tried to take another joint selfie, and yet again someone came up to us and asked if we would like them to take the pic for us which was very nice of them. This time it was a stallholder, who suggested we use his stall as a backdrop and who managed to take a really nice pic of us.

We’d visited all of the various halls and rooms now, so it was time to decide what to do next.

We had plenty of time still in hand, so we walked up into Farnham, and called into a few charity shops on the way – always a good source of inexpensive clothing as I’ve mentioned in the past.

In one we found a bracelet very similar to the one Siobhan was wearing. Since it was only £1.49 I decided to buy it so we had matching bracelets.

We were also keeping our eyes open for somewhere to eat, although neither of us were that hungry and nowhere seemed to fit the bill, so we just carried on down the High Street and calling into shops as we went, and eventually we ended up walking down towards Sainsbury’s and decided to simply buy sandwiches and sit out somewhere.

Having bought them, we spotted a little sign for Victoria Garden which turned out to be gorgeous little walled garden on the site of the former Victorian open-air swimming baths. It had loads of park benches, and was just what we were looking for. 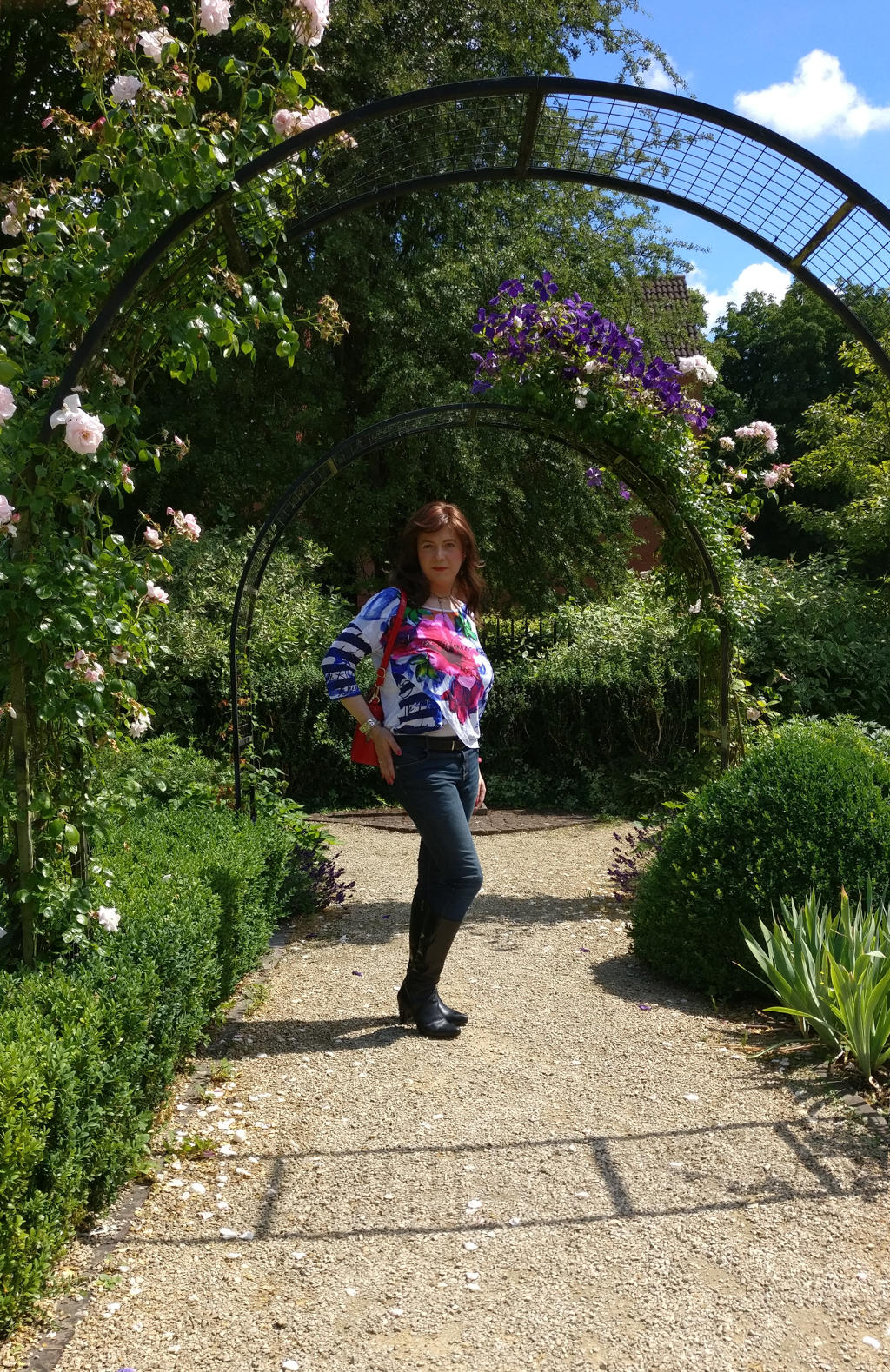 We ate our lunch, and then had a photo session for each other, although the lighting was very harsh as the sun was out, which made it very hard to get a good photo. One photo of me did turn out quite well though, despite the lighting. Some of them were so awful as to be hilarious though, and must never see the light of day. 😀

Eventually we realised that time was getting on and we must head back to the cars before our parking ran out. We timed it just right and got back with a few minutes to spare, then parted to go our separate ways, having both agreed that we had had an absolutely lovely time which had flown by.

According to my FitBit, we had walked over 3½ miles, which rather explained why my feet hurt so much and why I was so knackered. 🙂

Posted by Hay Llamas on 2nd July 2017 in Clothes, Shoes, and Jewellery, Diary, Out & About, Shopping, Social, Transgender

← Workbench 3 – the final workbench
Warco pillar drill, and other tools →